The bakery-on-the-rise is prepping to open an Agricola Street storefront in late November or early December.

B aking hundreds of soft baguettes, flaky croissants and warm danishes is somewhat of a nightmare for most chefs—but not for Luke Gaston. “A lot of chefs out there despise doing desserts, despise baking,” says the Halifax chef-turned-baker. “I always gravitated towards that.” He’s spent years working in various culinary positions, most recently at restaurant and bar Highwayman, but he’s now a co-owner of one of the north end’s up-and-coming bakeries.

The team met each other back in 2016 when Hopper and MacLeod were first opening Highwayman on Barrington Street. Luke and Hannah were part of the restaurant’s opening but left after a few years to start a life in Australia. But after roughly a year of living in the southern hemisphere, COVID-19 started spreading throughout the world and forced the couple to move back to where their families were living (and where they first met) in Peterborough, Ontario.

Around the same time, Hopper and MacLeod had reached a comfortable amount of success with Highwayman and started thinking about their next business steps. After reaching out to the newly-returned Gastons, Luke and Hannah moved back to the east coast, started coming up with business ideas and eventually found an affordable space in Halifax’s north end. 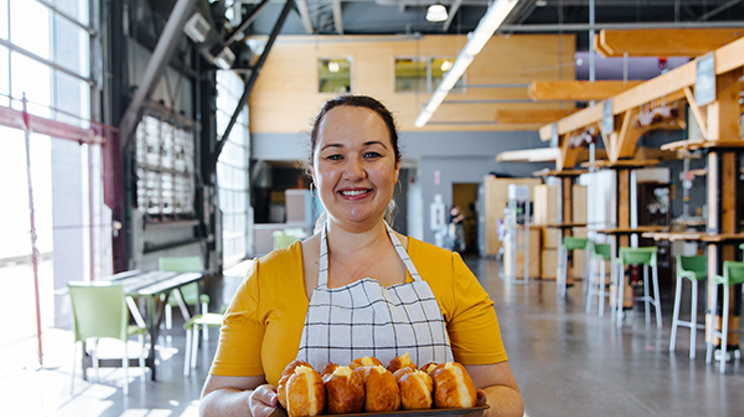 Starting a business that focuses on baked goods wasn’t really up any of the team’s alleys. Hopper and MacLeod have backgrounds in bartending while Luke and Hannah have spent 10 years in various roles in the hospitality industry. Luke studied culinary management at George Brown College’s chef school in Toronto, but never really focused on baking except for a few positions after graduating. “Having no formal baking background was definitely a bit of a, ‘Let’s just see what happens,’” he says.

Still, Luke was excited about focusing on baked goods and starting a new business in a city that he and his wife love. He had built some confidence after taking on the role of baking Highwayman’s baguettes and sourdough when the restaurant first opened, and he dove deep into studying baking books and doing research on his own time.

But after Luke and Hannah caught COVID and the team dealt with numerous delivery delays, some slight speed bumps pushed back their opening date. The four of them expected to start producing their goods and supplying businesses in January, but their equipment was only fully delivered in March. That forced them to wait until April to officially open.

While Luke’s Small Goods only officially started production this past spring, the supplier has already gathered a strong list of clients including Gio inside The Prince George Hotel, Dartmouth’s Cafe Good Luck and Dear Friend Bar. Every Saturday, Luke’s Small Goods also sets up shop in the Halifax Brewery Farmers’ Market to sell its products.

The Coast
The Luke’s Small Goods shop—here are Luke and Hannah Gaston in front of the soon-to-open space at 2393 Agricola Street—will aim to offer an approachable space for the community to buy basic sandwiches, simple coffee, fresh bread and other goods.

While it has only been a handful of months, the teammates are more than excited to take their next steps. Their new Agricola Street storefront will aim to focus on simplicity, take-away items and accessibility. Some of its products will include freshly baked bread, sweet pastries, deli items and spreads.

It’ll also offer a range of basic sandwiches and simple cups of coffee using a custom blend from Dartmouth’s Anchored Coffee. “We’ll just be selling filtered coffee because we decided we want people to be able to come in and grab a sandwich to take away,” Hannah says. “It’s just going to be like everything else—really approachable. We want someone that has only ever drank Tim’s coffee or Folgers coffee to come in and be like, ‘Yup, good coffee.’”

Luke says he wants to center the business’ model on that approachability, especially since there’s such a wide demographic in the north end. “I don’t want to alienate any people,” he says. “I want everybody that’s in the community to be able to come and shop there and enjoy what they buy there.

“It’s sort of a philosophy of mine that bread is meant to feed communities. If a bakery is in a community, every single person in that community should be able to go there and be able to afford to buy those breads.”

Chris is a general reporter at The Coast covering everything from social issues to city matters that affect Halifax. He's also a photographer and freelance writer, and his work can be found in Paper Magazine, VICE and This Magazine.