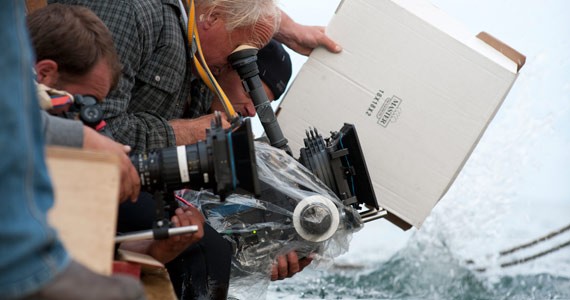 Use a pizza box on the set. #protip

Those who worked on the set of Shandi Mitchell's film, The Disappeared say it was one of the most memorable film experiences of their careers.

The film tells the story of six fishermen who, after their boat sinks, are forced to find their way home in two small dories, stranded in the middle of the Atlantic Ocean

Normally, films that have oceans scenes are filmed in a tank, so the effect of being on the ocean is simulated.

"You'd get your wide establishing shot on the open ocean and then you'd go to a tank and do all your close up shots and storm sequences, but we did the whole thing in the open ocean," says marine coordinator, Bill Flower.

Flower and his crew helped build a 16x24 foot floating platform that served as a shooting area for the crew, and the two dories the cast would be rowing in. Along with their equipment, for about two months, for about 14 hours each day, the cast and crew would sail to the middle of the Atlantic Ocean to film.

Flower, a professional skipper and mariner, has spent his entire life working on the ocean, but for many involved in the film this wasn't the case.

"It was a physical experience," says director of photography, Christopher Porter. "I was really excited and scared. I love the ocean, but to be out there and in this kind of situation is a bit nerve-wracking."

When he came aboard the project Porter said he and Mitchell met and discussed how the story was going to be filmed. The Disappeared is based off of a true story told to Mitchell by a fisherman from Newfoundland who, along with his crew, rowed back home when their fishing boat sank.

"Shandi said she really wanted truth," he says. With this in mind, Porter and Mitchell spent over two months in pre-production figuring out how they were going to progress with the project, knowing they'd run into some constraints.

"The biggest challenge was the weather and the boats being so small, you have to deal with the crew in the dories and keeping them safe," says Flower. He adds that on one day, the wind gusts reached almost 50 kilometres per hour.

Porter was concerned with how they'd film the story, including time constraints, where they'd place the cameras, or if the equipment would get damaged by the salt.

Despite a few setbacks, including one crew member falling into the ocean and one cast member becoming sick with pneumonia, there were few snags.

Porter says being on the ocean not only gave him and the crew a chance to live the story the film told, but it will also give the audience a chance to connect to the story.

"We became the story, in a sense," he says. "I think what Shandi and I really wanted to convey is that you are there in the boat, that you're claustrophobic and just as frustrated as they were."

Annual Atlantic Film Festival is not showing in any theaters in the area.