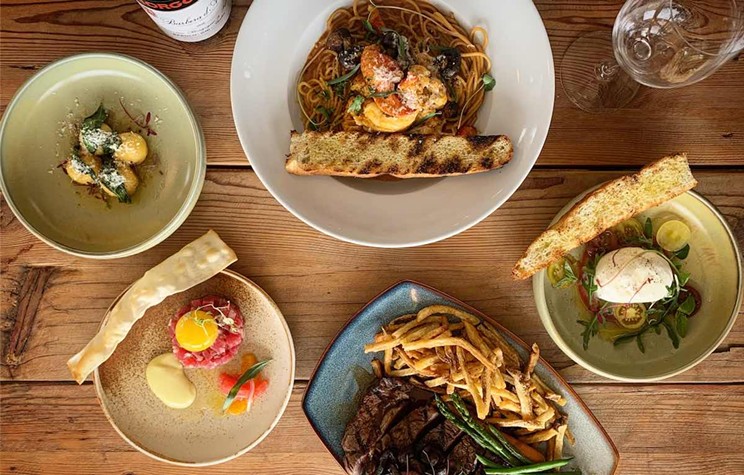 “In the Acadian land, on the shores of the Basin of Minas/ Distant, secluded, still, the little village of Grand-Pré/ Lay in the fruitful valley,” wrote Henry Wadsworth Longfellow in his epic poem, Evangeline. A story set amidst the Acadian mass deportation from Nova Scotia in the 1700s, the poem’s young heroine, Evangeline, is still a big name in the Annapolis Valley, where her statue keeps faithful watch over the Grand Pré National Historic Site, a few kilometres east of Wolfville.

Evangeline also holds court at the area’s newest restaurant, Longfellow, where an oversized antique print of the heroine presides over the dining room like a benevolent ghost. It’s a striking piece of art (and only a little spooky) but its placement isn’t merely aesthetic. Longfellow Restaurant may be the newest eatery in the Annapolis Valley, but it nonetheless puts the traditions of this centuries-old farming community front and centre, from its seasonal-local menu to its decor.

Located near popular Domaine Grand Pré and Lightfoot & Wolfville wineries, Longfellow is the latest incarnation of a restaurant that has existed under various names in the town of Grand Pré since it opened as Evangeline’s Snack Bar in the 1940s. A favourite stopping place for generations of travellers and locals, the restaurant was known for simple diner fare, fresh seafood chowder and pies made from scratch using local fruit. “It was an institution in Nova Scotia,” says Avram Spatz, the lawyer-turned-hotelier who bought the restaurant and adjoining inn—naturally called the Evangeline—from its original owners early this year, reopening both in June after extensive renovations.

While there are several established upscale restaurants at nearby wineries, there wasn’t much in the area for breakfast or lunch until now, says Spatz. As such, Longfellow is a new kind of restaurant for the Valley, blending an upscale menu of artfully-plated farm-to-table dishes with the sort of down-home comfort food that made the roadside diner a destination for generations. “It was a unique challenge to try to tinker with something so special to a lot of people,” says Spatz, who has fond memories of stopping into Evangeline’s with his family as a child. “We wanted to maintain the original spirit while breathing fresh life into the place.”

To do this, Spatz undertook a light-handed renovation of the dining room, keeping the original poured concrete floors, brown vinyl seats and the oversized portrait of Evangeline, while adding fresh white shiplap walls, bentwood chairs and a selection of vintage photos supplied by the former owners.

He also brought on veteran Nova Scotia chef Ray Bear, formerly of Studio East and Bear in Halifax, and Kisik Ridge Estate in Annapolis County. With his connections to local producers and skill at working with the Valley’s seasonal bounty, Bear has created a menu that strikes an approachable balance between high and low.

“During the day, we serve good but not intimidating fare,” says Bear. “But at night we would compete against any of the higher-end places in the Valley for sure.”

On a recent visit one evening in early August, the dining room is a mix of guests staying at the Evangeline inn, Valley locals and visitors from Halifax. Among Bear’s favourite dishes are the gnudi (pillows of airy dough stuffed with house-made ricotta and finished with brown butter, crispy sage leaves and a bright spritz of lemon) and a buttery burrata served with local tomatoes, basil and balsamic, and anyone ordering them will be glad they did. For mains, he recommends the whole trout for two—served head-and-tail-on with roasted new potatoes, carrot jus, and buttered leeks—and the lobster spaghetti made with freshly-shucked Nova Scotia lobster meat. The Atlantic ribeye is also a favourite, arriving richly marbled, deeply seared and sitting in a pool of umami-infused bone marrow jus. It’s more than enough for two as well, but you’d be forgiven for attempting it on your own.

Submitted
“During the day, we serve good but not intimidating fare,” says Longfellow chef Ray Bear. “But at night we would compete against any of the higher-end places in the Valley for sure.” Pictured is the crispy skin salmon with vegetables and kohlrabi puree.

Overnight guests can take full advantage of a wine list that combines local bottles from Lightfoot & Wolfville and Benjamin Bridge, with a small selection of imported muscadets, pinot noirs and Barberas from Bishop’s Cellar. Whether or not you indulge in any of these, no one should leave Longfellow without trying their most famous menu item: the pies. A rotating selection of handmade classics, from strawberry rhubarb to peach to coconut cream, they’ve been a tradition here since the days of the Evangeline Snack Bar, and one that Longfellow’s new owner hopes to continue for generations to come.

Q&A: How one independent Halifax theatre company took its show on the road—and had the best summer ever.

Where to go stargazing in Nova Scotia

Everything you need to know about the canoe world championships