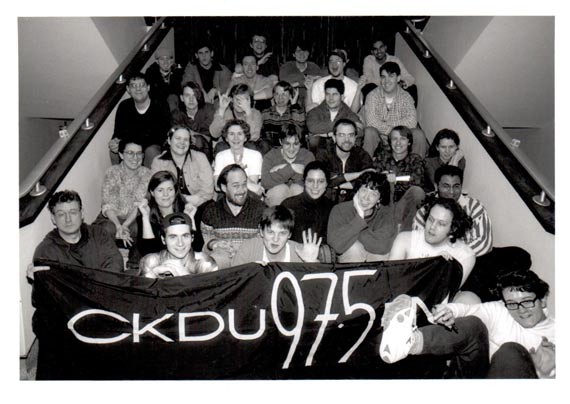 A wayback Team CKDU in the Dal SUB, part of the “thousands of vibrant souls” involved over the years.

CKDU-FM, Atlantic Canada's most celebrated campus/community radio station, has just turned 30 years old. Opening up the birthday party to the public is a shindig on February 19 at Plan B on Gottingen Street and an exhibit, What's Left on the Dial: A CKDU Retrospective, on March 2-8 at the Khyber.

Last fall, CKDU hired Kim Hornak to assemble artifacts. She says she discovered "a rich history that reflects the Halifax community. The biggest surprise was when I discovered over 3,000 audio reels at the Killam Library."

A vast assortment of characters and communities has taken advantage of the airwaves. Photographs, program guides and music charts from across the years reveal what a lively hub of humanity the station has been.

The late, lamented Club/Pub Flamingo and Wormwood's Cinema were vital early partners in promoting local and underexposed offerings, which could include anything from the band Blackpool to the film Jesus of Montreal. These posters, booklets and folders are a handy time capsule of turn-ons from the years BC (before The Coast).

I have been a volunteer since 1987 as Nick Barrington, host of Elegant Voltage. I've also been on the board of directors for nine years. A couple of folks have been there longer: Walter Kemp's classical music program has aired since week one, Bev Lamb and his folk show Touchstone came along six months later. They've rocked Saturday mornings ever since.

Like many universities, Dalhousie had a radio club for years. I recall hearing Stompin' Tom and an amiable Dal Radio DJ over speakers in the SUB in the early 1970s. The Dalhousie Student Union eventually made the big move for an FM license, reaching fruition on February 1, 1985. At the time, I was getting paid to play the hits and be a goof on commercial radio as long as I didn't use any big words. The corporate owner tightened its grip. Soon broadcasting became more a labour of love.

Thirty years in any organization that sees thousands of vibrant souls pass through its doors will generate some upheaval. A big part of 1993 Pride Week was the Friday All Day, All Gay broadcast. One sexy program mid-afternoon got a little too descriptive. Complaints were made. What some people saw as freedom of expression others viewed as recklessness. The CRTC was in the latter group. The subsequent license renewal came with conditions. A solidarity grew among campus stations and national broadcast SEX-FM increased awareness of how and when to be bold. With maturity came growth—a tenfold power increase in 2006 necessitated a move from 97.5 to 88.1FM.

A 1986 CKDU/Flamingo album release, Out of the Fog, contains the first recording by Sarah McLachlan and her band, October Game. In 1992, Sloan made its debut on another CKDU compilation, Hear and Now. While Rich Terfry morphed into Buck 65, he was also DJ Critical, host of The Treatment.

CKDU can still be comparatively saucy, so it's odd to think of it as a fount of history, an open, diverse reward for curiosity. It's on the internet (ckdu.ca), yet competes as a local voice with the internet's seemingly boundless digital galaxy. This evolution continues, all the more reason to toast CKDU's enduring presence on the radio dial, a bit to the left.

CKDU exhibit, What's Left on the Dial: A CKDU Retrospective
March 2-8
Khyber Centre for the Arts