A family-run, on-farm craft brewer, Meander River Farm and Brewery is passionate about its place

A knot of shadowy clouds hangs heavy on the horizon, and the winding roads in Hants County are mottled gray, the murky stamp of nighttime puddles fading as the sun finally breaks through, burning off the lingering dampness. By the time we cross the tiny bridge on Woodville Road, cotton clouds dot a blue sky. A bright red roof on the hillside blazes like a beacon. It’s Meander River Farm and Brewery.

The farm stretches for a couple of kilometres along a thin, burbling river of the same name, a river that curls and winds its way through low hills, scrawling a loose letter M through the nearby trees. The red roof sits atop the country store on the farm, where the brewery takes up a back room. In the front room there are shelves with other products from the farm: lavender soaps and salts, skin creams and jars of honey. You can exchange your growler at the counter; Campbell Bailey will run into the brewery to grab a new one for you.

Hunter and Angus, a pair of 12-year-old Labrador retriever litter mates, gold and black, totter around, barking slow greetings as visitors arrive. They are living, barking timestamps, the grey in their muzzles marking the dozen years since Bailey’s parents, Brenda and Alan, took over the land from her grandparents, who had lived in the 200-year-old farmhouse since the 1960s. “They moved out to BC and we took over the farm,” Bailey says. “At that point we started growing things—lavender, hops, the gardens—and having a few pigs here and there.” 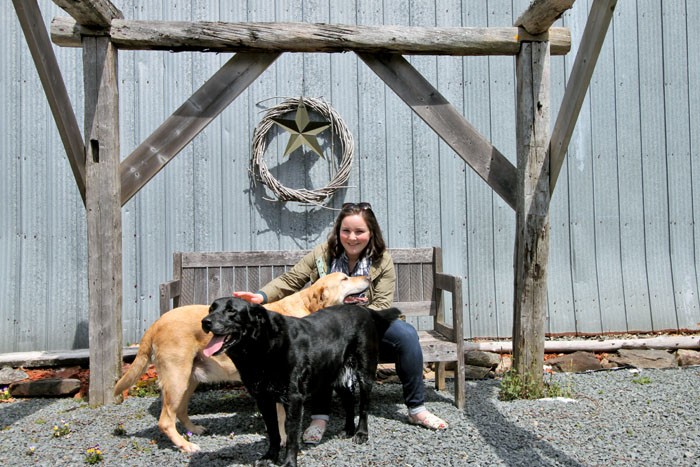 The family got into the hops business around seven years ago. It was then, when they started selling their crops to Garrison, that they realized their dream of starting a brewery could be a reality. “Everything was just falling into place. We had the space, we had the hops and we had a dream of being entrepreneurs,” she says. “So two years ago we opened the doors to the brewery.”

Like Big Spruce Brewing in Cape Breton, Meander Farm is an on-farm craft brewery. This is a smaller-scale operation, though, with just one boil kettle, one mash tun and two fermenters. “It’s like every home brewer’s dream, just small enough that anyone could fit it in their garage,” Bailey says. The farm grows lavender and hops, and there is a hobby aspect with some livestock and gardens. Bailey works part-time on the farm with her parents, commuting from Halifax where she lives and works a few days a week at Obladee Wine Bar. Her brother Fraser is also involved, but lives and works out west right now.

The farm keeps its Lunchbox Pale Ale and Honey Brown available year-round, but on any given day has around 10 different beers in its production cycle. “Because we’re so small, we do things seasonally,” Bailey says. A Smoky Chipotle porter also tends to go over well year-round, she says, but there are other brews they keep in the mix, like a Surf and Turf scotch ale made with seaweed and peated malt, and a wet-hopped brew made with fresh hops in the fall, called Homegrown. “It’s constantly rotating,” she says. “We’re seeing what the market likes, what we like, and trying to just roll with that. As things become available on the farm, we’ll use it, try to bring it in.”

We love this place and we wanted to be able to share that with people, whether it is the beer or the river itself.
—Campbell Bailey,Meander River Farm & Brewery

You can find Meander River’s beer on a permanent tap in Halifax at the Wooden Monkey, and it has shown up on rotating taps at bars and restaurants like Lion and Bright, Battery Park and the Board Room Cafe, and at Bishop’s Cellar and Rockhead. But the idea is to keep the business small, to stay community-minded, and to primarily operate as an agri-tourism destination.

“We love this place and we wanted to be able to share that with people, whether it is the beer or the river itself. We do trade shows and farmers’ markets to get the word out, but we really want people to come here,” says Bailey. “We want you to see how small it is, what we’re all about, why we’re doing it: our passion.”

White gravel crunches underfoot as we walk the farm’s path, winding by the hop yard, down to the silvery-mauve tufts of lavender. “Just over this hill, coming down into the barn is about a quarter acre of lavender and two and a half acres of hops,” Bailey says, pointing down the field. “We’ve got some apple trees down on the farm that we’re letting go now, but we make a cider with Davison Farms juice. Someday we’d like to do some kind of on-farm specialty cider as well.”

Bailey plucks a few buds from a branch of lavender, rolling and cracking them in her hand, releasing a wispy puff of perfume. “Lavender is a tricky thing to grow in Nova Scotia, so what we do have we savour as much as we can for our own products and distilling,” she says. But they do sell the lavender, which they’ve been growing since 2006, to Garrison, along with hops and honey they get from Cosman and Whidden. The honey company houses one of its largest bee colonies on the farm; when they extract, Meander River keeps and bottles some of its own product. Garrison uses all of those ingredients in its Honey Lavender ale.

The dogs criss-cross around us, trotting on the muddy edges of the path, briefly disappearing through the woods after a flittering of birds, bellies dripping with river water when they return. We walk back up to the trellis, past some rows of baby hops being tended in planters, to where the hop lines still sit bare, waiting for the last echo of winter’s chill to subside from the countryside.

The trellis is 18 feet high. “Every spring we’ll string,” Bailey says of the hops. “The plant is perennial, it’ll come up every year. We string from the top to the bottom. Usually about mid-July and early August is when they reach their height and start sprouting their hops. And then we’ll harvest by hand, have a little party with the community. We harvest around 300 pounds.”

By the end of May, the farm will kick its process into gear with the addition of seven piglets to the yard. “It all kind of starts with the pigs,” Bailey says. “They till the land, they fertilize the land, they get it ready for us. And then we plant whatever we can on that land. We use the hops in the brew and the mash is fed right back to the pigs. And then it all comes back in.” The Baileys want to farm as sustainably as possible: The wastewater from the brewing process is used to irrigate the hops, the pigs are eventually used for their own consumption.

“It all works together,” Bailey says. The tassels of her blue-and-white scarf flutter in the spring breeze as she skips over muddy patches in the gleaming white path, Hunter and Angus lazily at heel. “We want to be able to use what we have on the farm because we have so much to work with here.”