Going strong in its 35th year. 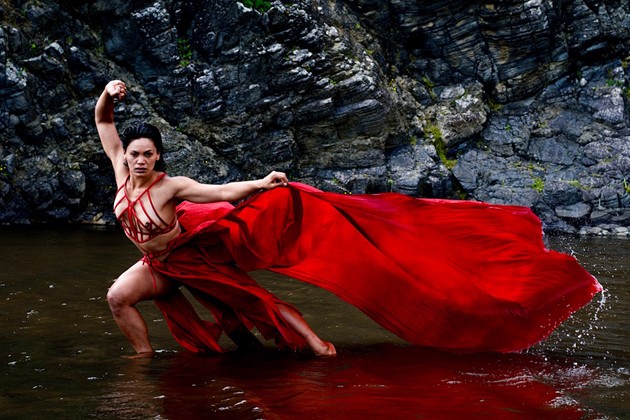 The season opener is definitely something to be excited about. In September, Kaha:wi Dance is presenting Re-Quickening, a powerful feminine performance ritual that is being co-presented with the Prismatic Arts Festival. Red Sky Performance is another Indigenous company that will be performing the much-anticipated Backbone in November. Glynn explains that these events dovetail nicely with the celebration of Canada’s 150th birthday, serving as a reminder of a history that goes back much further.

Spanish choreographer Sharon Fridman will be showcasing a contact-improv piece, stopping in Halifax on their first North American tour.

The Canadian talent in the upcoming season is also nothing to sneeze at. The incomparable Compagnie Marie Chouinard will grace the Rebecca Cohn stage on for one night only, on Valentine’s day, no less. Coleman Lemieux & Compagnie and Toronto Dance Theatre are also returning to Halifax. Ending the season will be Mocean Dance’s collaboration with Toronto-based choreography Heidi Strauss.

With seven companies and 55 dancers, there is a lot for dance fans to look forward to in the coming year.

Kaha:wi Dance Theatre (Six Nations) - Re-Quickening, September 21-23, 2017
As beautiful as it is arresting, Santee Smith’s ground breaking piece Re-Quickening explores the intersection of indigenous and new dance performance. Created through a process unique to her culture, Sante Smith’s Re-Quickening is a spiritual resurgence—a piecing together of shards of knowledge that tip colonialism on its head. Provoking, conceptual and visceral, this work is a timely call for reawakening. Kaha:wi Dance Theatre is one of Canada’s leading contemporary dance companies: renowned for its artistry, creative excellence and collaboration, this is a chance to experience the best of the contemporary indigenous dance movement now taking the world by storm.

“....a genuine spiritual experience that is also ravishing in its visual components.” The Globe and Mail, Paula Citron

Compañía Sharon Fridman (Spain) - Hasta Dónde, All Ways, October 5-7, 2017 (8 PM) – Dunn Theatre
Haunting, beautiful, human, unique – all words that begin to describe the work of Compañía Sharon Fridman. This remarkable contact-dance based company from Madrid - led by award winning Israeli choreographer, Sharon Fridman - has toured Europe and Asia extensively. With their roster of 7 dancers and a live musician, they are beginning their first North American tour here in Halifax, providing the rare opportunity to see this engaging European company.

Powerful, mesmerising and completely original, this internationally renowned company is one of Canada's leading exponents of contemporary world indigenous performance in dance, theatre and music. Raw and riveting, Backbone is a cutting-edge dance and live music creation inspired by the 'spine' of west coast North and South America. Featuring eight dancers, it combines contemporary dance with pure athleticism to produce a performance of remarkable power.

Coleman Lemieux & Compagnie (Toronto) - Mixed Program of James Kudelka Dances - December 7 – 9, 2017 (8 PM) – Dunn Theatre
Who can resist seeing one of Canada’s finest dance companies presenting a full evening of work by James Kudelka – one of this country’s finest choreographers? Coleman Lemieux & Compagnie are returning to Halifax for a magical evening of three works including the iconic The Man in Black - a celebration of American working-class grit and the man whose voice embodied it so movingly: Johnny Cash. Founded in Quebec in 2000 by Bill Coleman and Laurence Lemieux, CL&C has distinguished itself through innovative, unbridled artistic vision.

“...simple in its approach and ingenious in its outcome, The Man In Black was the hit of the program and one of the finest works I’ve seen...” Steve Sucato, Dance Magazine

Toronto Dance Theatre (Toronto) – House Mix, January 11 – 13, 2018 (8 PM) – Dunn Theatre
TDT is coming back to Halifax. For half a century, this world renowned company has remained one of Canada’s most vibrant and adored. In 2017 the company will mark its 50th anniversary by showcasing Christopher House’s unique contribution to Canadian dance scene with a mixed program of masterworks from his career.

“Downright startling – spewing forth a kinetic brilliance in the form of energy and continuum,” Anna Kisselgoff, The New York Times

Compagnie Marie Chouinard (Montreal) – 24 Preludes de Chopin and Le Cri de Monde, One Night Only: February 14, 2018 (8 PM) – Rebecca Cohn
Canada’s reigning queen of contemporary dance is coming back to Halifax with a mixed program as classic as it is outrageous — as athletic as it is visually arresting. A pure expression of human sensuality and spirit.

"A radical shock.... If you don’t shout, it’s because you’re well-mannered; then you remain speechless.” Aline Apostolska, La Presse

Mocean Dance (Halifax) –Premiere by Heidi Strauss, April 26-28, 2018 (8 PM) – Dunn Theatre
Atlantic Canada’s premier dance company, Mocean Dance, combines forces with Heidi Strauss, one of Toronto’s most prolific and successful creators, Strauss is currently resident choreographer at the Theatre Centre in Toronto. She makes mesmerizingly beautiful work addressing the ‘realness’ of where we are and who we are.

“Such a remarkably nuanced message could only be achieved by dance, and by an artist working only at the topmost level of her craft.” Stephen Bonfield, Calgary Herald