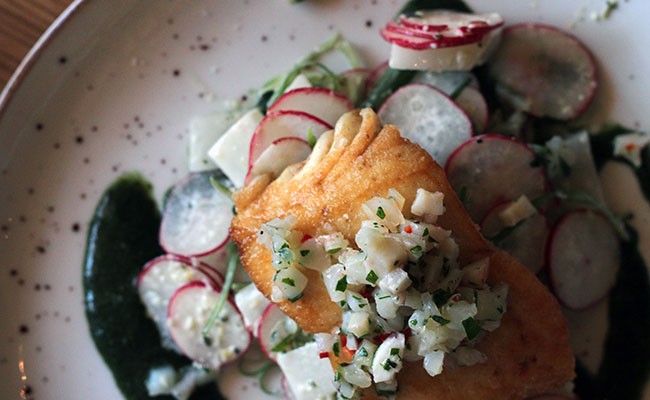 You don't need to be a bartender at Little Oak to be "behind the wood." It is impossible not to be behind wood at this tiny bar: The entire space is essentially a warm oaky embrace.

The room is small, but manages to feels airy with its combination of light oak, creamy whites and glass. After a string of days so rainy it feels like we should only see animals in twos, the sun is finally out so the restaurant has opened one of its huge windows, this one hinged like a garage door, making the dining room and patio feel like a shared space. As chilly breezes rip through Bishop's Landing, a server lays fuzzy blankets on the back of chairs and offers some to those brave enough to sit in the heatless sun.

It's a sleek and modern space, almost restrained. All of the art is found in the curves and undulating browns of the wood fibres, the gleam of glass on glass in the wine cellar, the pebbles and swirls in the white quartz bar and even the shadowy labyrinth of pipes behind the wooden panels of the ceiling. The simplicity makes the deep green in the luscious curve of the booth that sits on the back wall seem wonderfully ostentatious, like a party you want to go to even when it's empty.

It was last summer when Michael Hase, Rachel Knox and Ludovic Eveno—the team behind the Agricola Street Brasserie—opened Little Oak. Eveno, chef at the Brasserie, designed the menu with Ben Ridgley, who is heading up the kitchen at the bar.

And a bar is what Little Oak is, at its essence. The main menu is a small, a considered mix of snacks from charcuterie, cheese and spiced nuts to raw seafood like oysters, mussels and scallop ceviche. There is also a daily chalkboard menu that flexes with creativity—it changes with the season and with the whims of the chef.

The beverage program feels like a true reflection of the space—with a lot of depth found in its restraint, it manages to be comprehensive and not just interesting, but interested. There is a wine menu that pulls heavily from Old World wine countries, Canada and the US. There are small lists of beer, cider, sake, sherry and house cocktails. Basically, there is a ton of variety with no aimless sprawl.

I start with glass of Southbrook Small Lot orange wine ($16), a biodynamic vidal wine from Ontario. It is, in a word, thrilling to see a restaurant in Halifax take a chance on orange wine—a white that has limited extended contact with the grape skins during maceration, which affects not only the colour, but the aroma and tannin—as a regular, by-the-glass option. The Southbrook wine has just the slightest haze of cloudiness, the colour is a roily gold. It is bone dry, the vibrant citrus and herbal notes accented by a mellow yeasty tang.

My friend Megan orders from the cocktail selections. She gets the Forty-Love ($13), a summery sweet punch of citrus and mint balance with the bitterness of Aperol and Pimm's.

The beverage program feels like a true reflection of the space—with a lot of depth found in its restraint, it manages to be comprehensive and not just interesting, but interested.

Our server is Jon: He is polite and attentive, and when his attention is on other tables he is serving, someone else always seems at the ready to sweep in. He and the others routinely check in, making sure we are still comfortable with the huge dining room window open to the chilly sunshine. The room runs like a finely tuned machine.

Megan orders the Thai mussels ($10), and unable to decide to forego individual choices I order "eat the menu" ($76), which is six small plates listed on the chalkboard menu. I am clearly hungrier than Megan. I have over-ordered, though, I will come to learn. But between the two of us we manage to eat it all.

The mussels are beautiful, a clacking pile of tiny glistening shells with plump, silky mussels in a spicy, salty broth tinged with ginger and basil. Thin slices of red chilli fleck the bowl, a fresh green onion sitting atop like a frizzled crown. It's a fantastic bar snack and the merrestrial (is that a word? It is now! TM!) funk of the mussels and snap of the chilli make it a great pairing with the orange wine.

The first course of the full menu is a trout tartare, silky cubes of trout smacked with the spice of a Thai-inspired dressing. Pearls of trout roe and red and black tobiko give mild watery pops and salty snaps to each forkful. Dropped onto housemade sesame crackers that absolutely crackle with salt, this is something I could eat forever. I think I barely let Megan eat any. She was probably too polite to mention it. Though tempted to further explore the wine menu, the Tom Cat ($13) cocktail catches my eye. It's served up in a Nick and Nora glass—I am easily wooed by pretty glassware— a smooth drink, light and floral with some herbaceous and nuttiness from vermouth, sherry and Bonal, an aperitif made from quinine and gentian root.

In two hours the courses seem to fly by. Agnolotti filled with a herbed fluff of ricotta, the delicate sweetness of the cheese accented by a crumble of walnut gremolata and thick shavings of pungent aged gouda. Then a cold barley salad with glossy roasted beets and crunchy pumpkin seeds drizzled with balsamic and honey, sweet counterpoints to tart, velvety labneh, a creamy cheese made from strained yogurt.

Fennel fronds are draped over a beautiful moulded salad of shredded crab flecked with bright chillies and topped with diced green apple. Bright orange drops of Old Bay-seasoned oil float in the pale green honeydew water that surrounds the salad. The dish is bright and refreshing, light and lovely, as breezy and sunny as the day itself.

Pan-seared halibut has a golden crust that practically snaps as the fish below flakes apart. The fish and the herb-flecked salsa of minced octopus and shrimp that sits atop are a delicate foil to what feels like a nuanced exploration of bitterness below—any sharpness in the green swipe of a French sorrel and spinach puree reads as merely creamy next to a crisp peppery bite of radish salad. It all works together wonderfully.

My least favourite dish is the spiced lamb and pork meatballs and faro, which seem to have some Moroccan influence. The spicing is more aggressive here than in other dishes, and to me the dish is a bit muddy and flat. But I'm full anyway.