Noble’s Jenner Cormier has just been crowned The Best Bartender in Canada. First Halifax, next the world? 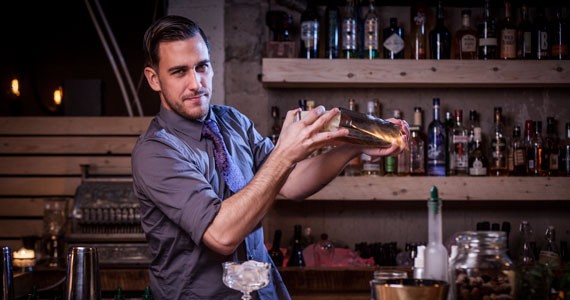 It's just after 8pm on Saturday night and Noble, the fallout shelter of a bar that is tucked into a concrete room underneath The Middle Spoon, is gearing up for a night of service. Champagne coupes, margarita saucers and highball glasses gleam in the dim light behind the bar. Jenner Cormier pulls an old-fashioned glass off the shelf, slides it onto the bar.

Cormier is The---yep, capital-T The---Best Bartender in Canada. He beat out hundreds of applicants to make it to Diageo's World Class Canada competition. There he beat out nine other bartenders---seven from Toronto, one from Vancouver and Halifax's own Jeff Van Horne---for the national title and a place in an international competition.

"What a weird title, eh?" he says with an easy shrug, both blown away by and proud of his win. He grabs a thick shard of ice and cracks into it over the sink, laying the foundation of one of the cocktails that led him to his win.

"It won't be exactly the same," he says, dropping the ice into the glass. He won't use the expensive Reserve brand rum or cedar-flavoured ice he used in Toronto. The drink features a cordial made of black currant jelly, ginger, orange juice, sherry, lemon and a mix of spices. "It's really sort of savoury flavour that highlights that rum," he says. He also adds some homemade espresso-chocolate bitters.

Cormier's cocktail presentation at World Class Canada had a Mad Hatter theme, both expanding on and concentrating the tea party theme he played with at Halifax's Made With Love earlier this year.

"I served the drink in mismatched teacups with little macarons that had signs in them that said 'eat me' and I also served it with a bottle of bitters in a mason jar with a little bit of syrup underneath that said 'mix me.' I had a clock that was stopped to show that time kind of stops when you're interacting and having cocktails."

Other bartenders used themes ranging from The Pink Panther to Titanic, and The Last Samurai to Die Hard. "That's the challenge because you're not used to that," he says. "You go to Made with Love and you just make hundreds of drinks, so you're not used to this theatrical approach.

"Well, most bartenders aren't used to it," he concedes as he runs the blue flame of a butane torch over a small pan of wood chips that flare up and send curls of smoke through the air, the aromatic for a sensory-based cocktail plating one of the customers across the bar ordered. "What they really emphasize at Diageo is that it's a bartender competition, not a cocktail competition," Cormier says. "And that's what kind of stuck with me heading into it and preparing: we're there to give people an experience."

This is the fourth year for the Diageo World Class Competition, but Canada's first year participating. The competition---the most extensive cocktail bartending education program in the world---involves making a series of creative and classic cocktails, and using some of Diageo's Reserve brands, like Bulleit bourbon, Ketel One vodka and Tanqueray No. Ten gin. Cormier will head to the French Riviera from July 4 to 9 to compete as one of 50 Best Bartenders from around the globe for the World title.

"I'm just glad and grateful to be representing the country," he says as he mixes up an Old Fashioned for a new customer. "But what's truly exciting for me is that people will start to realize where Halifax is and that we're passionate about our drinks out here.

"I'm hoping that this will kind of move the spotlight that's placed on Vancouver and Toronto, that it will extend it a little further east," he says. "I feel really honoured and super-excited to be a part of that shift."