To use feminist rhetoric taken from grassroots organizations to acknowledge rape culture on campus, and then block legislation that would support survivors is liberal hypocrisy at its finest. 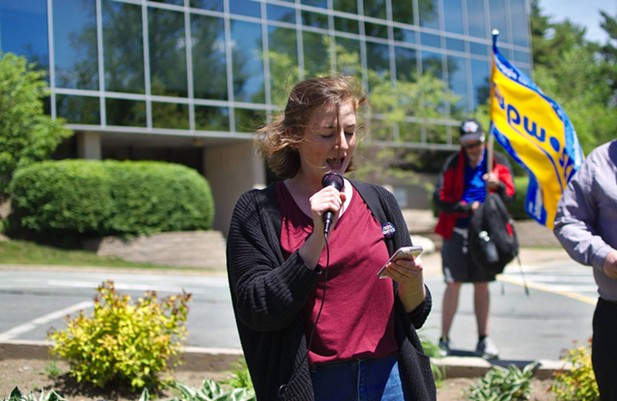 SUBMITTED
Aidan McNally is the chairperson of the Canadian Federation of Student—Nova Scotia. The Canadian Federation of Students represents over 600,000 students across the country and through the "No means No" and "Consent is Mandatory" campaigns, has been on the forefront of fighting against sexualized violence on campus for decades.
As I sat in the gallery of the provincial legislature and heard Patricia Arab, MLA from Fairview-Clayton Park, paying lip service to feminist ideals while simultaneously arguing against legislation that students have been demanding for years, I felt sick.

On the eve of International Women’s Day, the Liberal government had once again stonewalled legislation that would support survivors of sexualized violence on post-secondary campuses.

Campus sexualized violence legislation has been blocked at every opportunity by the Nova Scotia Liberals. First brought forward in 2015, there have been four different bills introduced into the house that would ensure that all campuses have robust stand-alone sexual violence policies and mandate public reporting on incidents of sexualized violence. Policies would include education, prevention and support initiatives and be reviewed regularly with student input. Similar legislation has now been passed in four other provinces.

When speaking in opposition to , the Nova Scotia Liberal Party quoted a report they released in December which included 10 recommendations for addressing sexualized violence on campus—a report that students helped write. While the report—“Changing the Culture of Acceptance”—took an intersectional approach to the issue of sexualized violence, this was only as a direct result of the tireless (and unpaid) contributions of students, the Antigonish Women’s Resource Centre and the Avalon Sexual Violence Centre. While the final recommendations were ones we could stand behind, the final report omitted the most critical contributions—a call for implementation timelines and accountability mechanisms.

To use feminist rhetoric taken from grassroots organizations to acknowledge rape culture on campus, and then block legislation that would support survivors is liberal hypocrisy at its finest.

Minister of Labour and Advanced Education Labi Kousoulis, who has less than a perfect track record on the issue of sexual violence within his own party, has shown that he will prioritize this government’s relationship with university presidents over ensuring that our post-secondary institutions adequately address sexualized violence. The reality is, universities have an abysmal track record in responding to sexualized violence on campus. Instead of giving university presidents the benefit of the doubt, we need government to give students tools to hold administrations accountable in the form of legislation.

In the time of #MeToo and #TimesUp, the public discourse on sexual violence has shifted. It has been unnerving at its best, and disgusting at its worst, to hear administrators, government officials and those in the public eye claim to understand the reality of rape culture on campus while actively thwarting attempts to challenge the status quo.

Students will not forget that just a few years ago that now Status of Women minister, Kelly Regan, went on record saying sexual violence policies were unnecessary because the criminal code already exists. Or how just last year, students at Dalhousie University began paying a levy to fund the student-run Sexual Assault and Harassment Phone Line because president Richard Florizone and the Dalhousie administration refused to do so.

As a student who has been involved in this fight for years, my message is this: while you might now be using the right words, your inaction speaks volumes. Do not hide behind the language of a report that was written by the students and community groups you refuse to support. Do not appropriate the language of intersectional feminism while you leave community sexual assault resources scrambling for funding. Do not claim to support survivors on campus, and refuse to pass legislation that would make campuses safer.