Liberals hold on to all four HRM seats in federal election

The Coast takes you to three results parties in the Halifax riding for a taste of the election night energy. 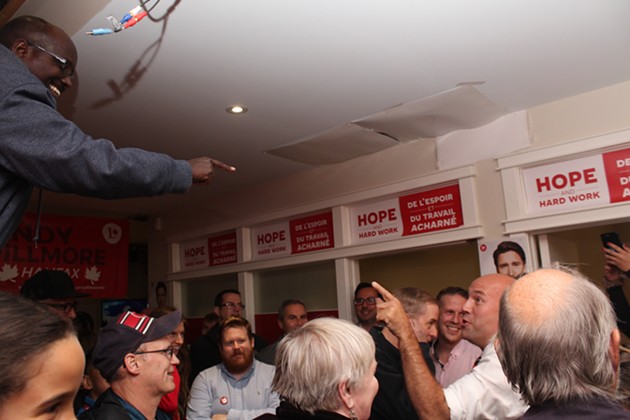 Victoria Walton
Andy Fillmore will keep his federal seat in Ottawa for the Halifax riding.
After a nearly too close for comfort six-week campaign that did little more than expose how poorly we Canadians are educated in the ins and outs of our governance system—and puff unearned wind into fringe party ideology—Halifax (and the country) gets another go at Liberal leadership.

All four Liberal incumbent MPs in Halifax Regional Municipality (Andy Fillmore, Geoff Regan, Darrell Samson and Darren Fisher) were re-elected by their constituents. NDP candidates took second place (and 25 percent of the popular vote) in all four as well.

Voter turnout for the region was on par with the national average at 66 percent, coming in under Nova Scotia's overall performance with 69.4 percent of registered voters showing up to vote at the polls.

As per tradition, party supporters, volunteers and free-snack fienders made their way to the parties' results parties—awaiting the arrival of their candidates and word on how the city, and country, voted.

The Coast has rounded up the highlights of the night at the Halifax riding Liberal, NDP and Green Party results parties. 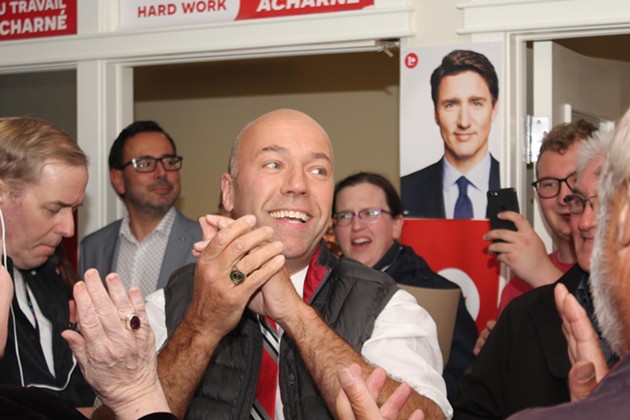 In what was originally projected to be a rather close riding, incumbent Liberal MP Andy Fillmore beat out NDP candidate Christine Saulnier for the seat.

At the beginning of the evening, a thin crowd gathered to watch the results roll in. But by the time Fillmore arrived at HQ around 10:30pm, it was a full house.

“When we started this six weeks ago, who knew where it was going to lead,” said Fillmore. “But we worked harder than anybody, we did anything that we could and we left it all on the field.”

Fillmore says his team knocked on 10,000 doors in the riding and made thousands of phone calls.

“We shared the message of the future, of the progressive future that we want Halifax to have."

Victoria Walton
Fillmore and his daughter Daisy among supporters celebrating his win.

The re-elected MP says the most important person on his team was his 12-year-old daughter, Daisy. “She has been a supporter and an inspiration. I couldn’t do it without her, and frankly, I do it for the most part for her," said Fillmore.

Fillmore says he plans to continue the work he’s been doing since the 2015 election. “The core piece will continue to help the middle class and those people who are working hard to join it,” he said.

Fillmore shared several of his accomplishments as MP with Monday's crowd, including opening George’s Island to the public—slated for next spring—increasing bus and ferry investments and growing the Irving shipbuilding contract.

But one new, pressing issue that’s been added to the Liberal agenda is climate change. “What’s different this year is that the climate crisis is come in to really crisp focus for all of us,” said Fillmore.

As Canada’s ocean city, Fillmore says Halifax has an opportunity to take the lead in creating green jobs.

“We have all the potential in the world to lead climate change action from right here in Halifax,” he said. “Creating those jobs that are going to pay for the transition that we so desperately need.”

MLA for Halifax Citadel-Sable Island Labi Kousoulis was at the Liberal HQ on Quinpool Road when Fillmore’s win was announced.

“I was very happy to see him be successful,” Kousoulis told The Coast. “I think he’s done a great job and I think it’s good for Halifax and Nova Scotia.”

The MLA says he was concerned this past week when projections showed the NDP gaining traction in the riding.

“A few weeks ago I was sitting in the legislature like ‘Oh Andy’s got a slam dunk,’ and the last week it was like ‘Oh I’ve got to pick up my socks a bit more and give an extra helping hand,’” Kousoulis said.

Fillmore says overall, he’s just excited to get back to Ottawa and back to work.

NDP’s calls to action are echoed amid disappointing election results

Around 100 people filled the Mayflower Curling Club in Halifax to celebrate NDP candidate Christine Saulnier’s campaign in Halifax. As the Liberals began winning seats across the province, the mood dimmed. But Saulnier’s entrance brought back a surge of the energy that carried her dedicated team throughout the campaign.

Saulnier said her work for the people of Halifax wasn’t over with her defeat. “I am so grateful for the work that we’ve done together. I’m so proud of this campaign,” Saulnier told the crowd.

She called on those in the room and her supporters around the city to build a mass movement for change, together—repeating NDP campaign promises and party policy tenents.

The NDP party won 24 seats in the federal election—and 16 percent of the popular vote—but only one seat in Atlantic Canada, which went to Jack Harris in Newfoundland’s St John’s east riding. But in HRM, the NDP won 25 percent of all votes cast.

Saulnier said that no matter who formed government, it’s up to Canadians to hold them to account on issues that matter to people in our community.

Saulnier will return to her job as Nova Scotia director of the Canadian Centre for Policy Alternatives and will bring the stories she heard while knocking on doors with her in her work. “I will continue to fight social and economic justice for living wages in our city and for environmental justice,” she said.

As for running again Saulnier says there’s a good chance: “This was an incredible experience for me…the first time that I've ever done anything like this,” said Saulnier, smiling. Knocking on doors and meeting thousands of people in every walk of life is “not something you get to do in everyday life.” And the people she met and stories she heard with certainly stay with her.

“I loved the city before, and I love it even more now.” 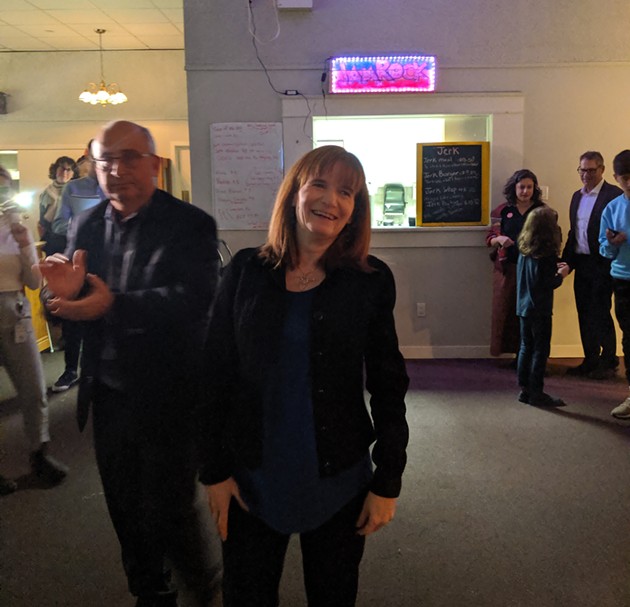 The Coast
Christine Saulnier arrives at the Mayflower Curling Club in Halifax.

Greens go for gold, get bronze, commit to continuing the fight

Jo-Ann Roberts, leader of the Halifax Green Party, only wrote one speech for last night's election but that doesn’t mean she considers this campaign a loss.

Roberts remained in high spirits when she re-entered the Green Party HQ, following a phone call with the Liberal’s Andy Fillmore. She only had words of hope and excitement concerning the future of their party in Nova Scotia and Canada as a whole.

"We fought an amazing campaign. We set the bar, we raised the expectations and we lived up to it, " said Jo-Ann Roberts to her crowd of supporters, shortly after hearing the news of her defeat. "We’ve changed politics in this city and in this province."

The campaign office was a sea of green throughout the night, with just over 60 people attending in support. Amid a mixture of volunteers, supporters and family, spirits ran high, filling the air with conversation and laughter. When Claire Kelly, Roberts’ daughter, took second place in the Moncton-Riverview-Dieppe riding for New Brunswick, the room exploded with cheers.

Although the majority of the party didn’t expect to win the riding, many believed that the platform they built for the Green Party this election will live on for years to come.

“It was amazing to see the whole team develop around Jo-Ann and develop around the whole message that there’s a need for a green voice in the House of Commons from Halifax,” said Susan Antoft, a wearer-of-many-hats volunteer for the party. “The end result is a little disappointing but I can only see the Green Party growing and getting better in the future."

While the Green Party got no seats in Nova Scotia, it made a breakthrough in Atlantic Canada, when Jenica Atwin from the Fredericton riding beat out her Liberal competition. Elizabeth May and Paul Manly were also re-elected for their ridings which gives the Greens three seats, a first for the party.

“We achieved more than anyone expected of us,” said Roberts about her defeat.

Roberts ran federally for the Green Party in Victoria but lost in the 2015 federal election. This year, she ran on a promise to protect the coast from offshore drilling, transition from fossil fuels to green energy, introduce a Guaranteed Liveable Income for Canada and bring in a national Pharmacare plan. She is also involved in issues affecting climate change, housing, democratic reform and income inequality.

Isabel has been a freelance reporter with The Coast since 2020, covering a variety of topics including the environment, development, and other social issues. Before the Coast, Isabel worked at the Dalhousie Gazette as opinions editor and is going into their fourth year in journalism at the University of King’s...
Read More about Isabel Buckmaster