Let's Get Trashed at Thrashfest 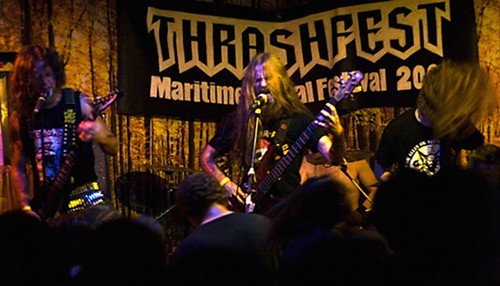 Oh hi metalheads. One of your biggest parties of the year is upon us again this weekend as Thrashfest returns for its third round. The two-day festival began humbly, as a house party in co-organizer Matt Francis' house, and has now unfolded to an tipsy and exuberant annual affair at Gus'.

This year's lineup features returning groups and first-timers (veterans Terratomb are on the bill, while the female-fronted fiends in Ignightor make their first appearance this year.) And while Abyssed will be making an appearance from Montreal, the rest of the lineup is purely local—-an unplanned but happy accident. "A good community has developed over the past two years we've been doing this," says Francis, who organizes the fest with Fistfight bandmate Myron Cottreau and Thy Flesh Consumed singer Peter Mestre. "People might look around and see a bunch of tough people in leather jackets, but the atmosphere is actually amazingly friendly and nice - people have been really welcoming."

This year's event features a reprise of the metal brunch introduced last winter during Thrashfest's companion festival Hell Freezes Over, featuring our favorite Judas Priest tribute group Screaming for Vengeance and Novichok, plus a breakfast all for $5.

Francis encourages all curious first-timers to venture out and take a bite of "Satan's Sausage." "People shouldn't worry about being metal enough," he says. "If you're at the show, you're metal enough."