The singer-songwriter is obsessed with the 1970s. Her Nov. 11 Halifax show—and new album with Ben Caplan—promise to hook you on the decade, too.

Terra Spencer knows that, when it comes to eras, right now is all about Y2K—but you can keep your butterfly clips and baby tees. The singer-songwriter has spent most of her life hooked on the (arguably) golden decade of her chosen genre: The 1970s. The fixation, Spencer recalls, “came about really organically, because I hung out a lot in my grandparents basement. That's where the instruments were, where the piano was. And there was no YouTube, there was no streaming, so whatever music you could get your hands on, that's what you listened to…So I listened to the records that my aunt had left behind in the basement: The Carpenters, Elton John, Supertramp: Those were my music collection.”

It’s not just that most of her favourite LPs were from that specific period, though. With a closetful of ’70s clothes and a voice lifted from AM radio, it feels more like Spencer was born in the wrong era: She should be singing her story-driven songs from a palette of burnt orange and avocado green, when times were different and pant legs were wide. Luckily for us and our modern ears, she showed up late—in our millennium—instead.

Case in point? Spencer’s latest record, Old News, an 11-track effort produced by Ben Caplan that was recorded live off-the-floor in a rapid-fire five days. “Most of the record was inspired by records from people like Ella [Fitzgerald] and Louis [Armstrong]. That kind of feel where that was the way records got made: You pile a bunch of the best musicians you could find into a room and maybe did two takes of a song, and that was it. Whatever you captured, that’s what you ran with,” Spencer says. “The two takes we would capture: That was the song.” The vibe is very Randy Newman’s well-behaved side meets early Hall & Oates.

“I took one of those leaps and did the uncool thing and just wrote to Ben and said, ‘Listen, I write songs. I have this one song that I would love to hear you sing. If you would ever make the time for it, that would be really wonderful,’” Spencer recalls of the record’s origin. After meeting for tea and plonking about on Caplan’s kitchen piano, Old News’ first track was essentially demoed—but Spencer didn’t think much more would come from it. Instead, Caplan called up and asked to produce. His dramatic baritone is littered throughout the album, a counterweight to Spencer’s airy voice and the album’s spright piano work.

(You can hear the whole thing live—“I’ll sing some of the songs that Ben sings,” Spencer adds with a little laugh—on Friday, Nov. 11 at 7:30pm at The Stage at Saint Andrew’s, 6036 Coburg Road.) 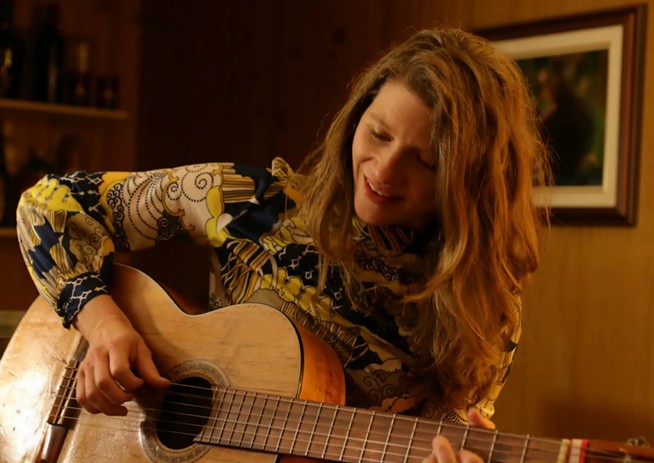 
Of course, Spencer’s latest record is far from our only era-based evidence. There’s another current project that proves she has the right to call the Me Decade “mine”: The new documentary Lost Angel, about singer-songwriter Judee Sill that cast Spencer in its B-roll (since live footage of Sill is scant). Sill, a ’70s artist who “was signed to Asylum Records—which was David Geffen’s new label at the time—alongside the Eagles, Jackson Browne, Linda Ronstadt: All these people that went supernova, but she just played her cards wrong,” is maybe best described as the Amy Winehouse of her era: Tragic, beautiful, talented and a light snuffed out too soon.

Spencer recalls how one of her first-ever songs, an effort she uploaded to Facebook, was compared to Sill, causing Spencer to go on a daylong deep dive into the Californian’s movie-worthy backstory and to take on the late singer-songwriter as an inspiration and muse.

“In my phone case there’s a picture of Judee Sill, I have a Judee Sill sticker on my laptop,” Spencer adds. “She was 35 when she died, in the year that I was born—and her life, and obviously career, ended right at the same age when I began writing songs.”

While her talisman of tunes isn’t exactly a square fit (Spencer’s music doesn’t carry the religious streak Sill was known for, for example) the space between the two feels more crevice than valley—something affirmed by Spencer’s turn in Lost Angel: The Genius of Judee Sill, where she acts as an almost body-double of her icon, shooting cropped scenes in era-appropriate garb redolent with guitar. The filmmakers behind the doc found Spencer through word of a tribute show she was putting on for Sill at the Art Bar in 2019, on the 40th anniversary of Sill’s passing. Since she died in relative obscurity, “I really wanted to give her something that felt like a proper memorial service, as well as being a tribute show,” Spencer says.

“I try not to be too hokey about it, but it's partly because I feel like not that many people know about her,” Spencer adds, saying she’s “trying to share her story and her music with a bigger audience that she didn't get to do.” If Sill were still around, she’d love Old News—and maybe in another universe somewhere, it’s Sill who warbles alongside Spencer on the album standout, the Sill-evoking song “Messy.”