Halifax council turn down a way to press “pause” on undesired growth. 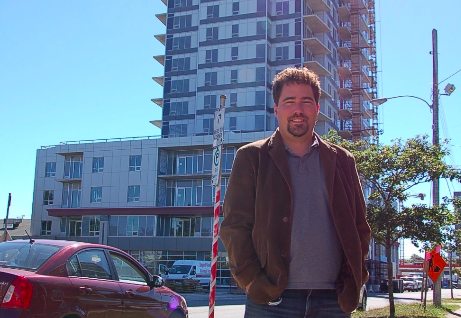 When demolition started on Young Avenue and plans to pave the way for Hondas hit the north end, Haligonians began campaigning to “save” their streets from development.

But last Tuesday, Halifax Regional Council voted ‘no’ on adding a tool that may have aided that fight. By a narrow vote of 8-7 (with two councillors absent), the city turned down creating interim development controls.

“It’s a planning tool, it’s not used very often,” Watts says. “It’s one of those tools that allows us to do our job and to have a conversation in our community.”

The tool would help control how people use their properties, says Watts. That could potentially allow council to change the zoning of a particular property to not allow commercial use of largely residential land.

“It’s one of those tools that allows us to do our job and to have a conversation in our community.” —Jennifer Watts

Peter Ziobrowski, founder and president of The Action Group for Better Architecture in Nova Scotia (AGBANS), says if council agreed with citizens angered by recent developments, it would have given them the option to take time to figure out how to protect properties.

Ziobrowski says information was available on the tool, but he believes the councillors didn’t understand it. Three months ago, council voted to amend the Heritage Act to allow interim develop controls, says Ziobrowski. But when it came to adding the planning tool to the municipality’s charter, allowing it to be applied to all forms of planning and development, councillors took issue.

Spryfield—Sambro Loop—Prospect Road councillor Stephen Adams says development controls add too much uncertainty for every potential project. He says the controls could also unfairly impact those who have already purchased property.

Ziobrowski says Adams has a valid argument, but he points out that the neighbours of hypothetical development projects also bought their property with an expectation that the zoning would remain consistent. Take those residents who are going to have to live with council’s decision to allow a 29-storey building at Quinpool and Robie.

“The neighbours of that property bought their properties with the expectation that it was zoned a certain way, and then along comes a developer who wants to redevelop, asks for a whole bunch of extra height and council just folds over and gives it to them,” Ziobrowski says.

HRM has used development controls before, but had to apply for special consideration to use them from the province. Watts says council can apply to use IDCs again, but the process is unnecessarily complicated. Ziobrowski says more than IDCs are needed to fix how Halifax is growing.

“Part of the issue is that a lot of the zoning and development rules that are in place now, have existed since the ’70s,” Ziobrowski says. “Halifax in the ’70s is a very different place from Halifax in 2016.”

After the war, Halifax was rundown, he says. Industrial development was encouraged on the peninsula. But now, HRM is trying to rebuild a vibrant downtown.

“So any tool that gives council the power to say, ‘Hang on, we want to think about this,’ is a good thing,” says Ziobrowski.