Say what you will about the beer, but the policy is watered down. 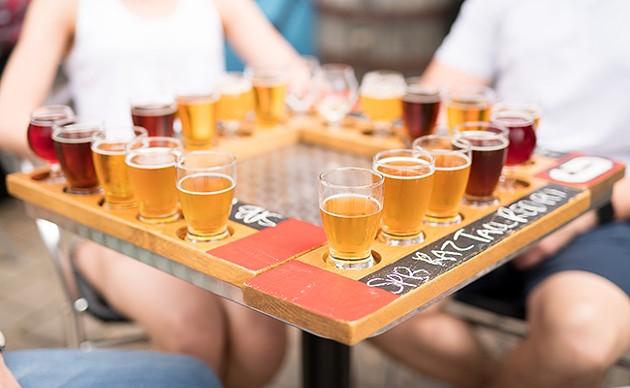 Ryan Williams
“When you take a word like local and you get rid of any cache or any real meaning to that word, now all of a sudden Budweiser is local.”
In April, the provincial alcohol regulator quietly passed the new Local Beer Production Policy, which means a 40 percent reduction on the markup for local producers selling beer to the NSLC.

In theory, the policy gives more profits to "local" brewers and less to the NSLC-slash-government, by giving the brewer a higher percentage of the markup (retail price) that the liquor corporation would put on the product's shelf price.

The policy applies to the first 15,000 hectoliters of a product sold, capped at a benefit of $750,000. But according to the Craft Brewers Association of Nova Scotia (CBANS), only one company will benefit from the new policy: “The Oland brewery on Agricola Street there in Halifax, because they make beer in Nova Scotia, they are going to be considered a local producer,” says CBANS president Kirk Cox.

But unlike other local breweries—think Garrison, Propeller, Good Robot and more—Oland’s is owned by multinational company Anheuser-Busch InBev, which also owns Labatt, Budweiser and Coors.

These smaller companies already got the markup benefit when it was capped at 15,000 hectoliters of total product. But with the new policy, selling the NSLC an amount over the cap doesn't get you penalized—meaning AB InBev, Oland's parent company (ahem, and Labatt's and Budweiser's), now qualifies too.

Cox says local brewers were taken off guard when the announcement came: “The board decision was made in February, which means the NSLC would've been working on this for months in advance of that,” he says. “So we were told not after the board approved it but the day before it was to go public, or in effect, which was April.”

CBANS defines a craft brewer as a business making less than 15,000 hectoliters a year, and no one in the association has hit that limit yet.

They will get their tax break too—but not nearly as much or as quickly as AB InBev will. “I've been told anecdotally [Oland’s] makes 250,000 hectoliters a year I believe. So, even that portion of their business in Halifax is a pretty big business,” he adds.

Previously, local brewers that outgrew the 15,000 hectoliter limit would be treated the same as any other big brewer and would lose their tax break. But now, the first 15,000 hectoliters qualify as long as the beer has “local producer status” by having some component of production in the province.

“The local producer policy forgets the fact of where the brewery comes from or where they are based out of or whether or not they're actually a local business or not, and moves the definition essentially to where you produce your beer. So, if Heineken can come to Halifax and produces beer, can they get this markup?” says Cox.

Nova Scotia’s new policy is in contrast to other jurisdictions, where the size limits for craft brewers often increase as the beer market matures.

“They’ve said 'OK well now our craft brewers are starting to grow up a little bit, get a little bigger a little stronger', and they’ve raised the level," says Brian Titus, president of Garrison Brewing in Halifax and vice president of CBANS. "Instead of doing that, they’ve kept the level at the same point and now they’ve said 'well you don’t lose anything after you get to that point. And you know, let’s just give it to everybody, it’ll be fair'."

But the NSLC says the new policy is to the benefit of everyone."We developed a Local Beer Production Policy to ensure all local producers are treated consistently in terms of NSLC markups. Previously only those with a craft brewery status who produced under 15,000 hectolitres were eligible for the preferred markup," says NSLC rep Beverley Ware in an email.

"This industry is growing, and some producers are approaching production of more than 15,000 HL. Under the old policy, that meant they would lose the preferential mark-up on all volume. With the new policy, they will retain it on the first 15,000 HL," says Ware.

“When you take a word like local and you get rid of any cache or any real meaning to that word, now all of a sudden Budweiser is local”

Titus says craft brewers are aware that the multinational company has long been trying to convince the government they need more tax breaks.

“The understanding is very clear that this has been lobbied for quite a bit of time, and if we don’t give some kind of break to these guys you know, they might not always be there,” he says.

While Titus says he’s grateful for the jobs the Agricola Street factory contributes to the local economy, it’s now coming at a cost to taxpayers.

“There are 200 people making a good living there, so that’s a positive thing. But that does not and should not qualify them for a break entirely programmed to aid small local producers,” he says. “What it means is now every year, the taxpayers are going to pay Budweiser three-quarters of a million dollars to stay here and produce beer.”

The CBANS vice president says local brewers have more interest in keeping their profits local, and not just one aspect of the business. “Every aspect of what we do is done here as opposed to dealing with marketing agencies in Toronto and dealing with head office for purchasing and whatever else. Everything we do stays here,” Titus says.

“It comes off a little sneaky, to be honest, and it strikes unfortunately the trust factor,” Titus says. “We’re small businesses part of a small association, and we have to have faith that our regulator who is our number one customer is going to have our back and our interests and involve us in the process.”

Brewers have no choice but to reconcile with the provincial alcohol monopoly retailer and licensor. However, Titus does hope to continue the fight to keep meaning in words like “local” and “craft.”

“When you take a word like local and you get rid of any cache or any real meaning to that word, now all of a sudden Budweiser is local,” he says. “Local means a lot to not only brewers and winemakers and distillers and that but it also means things to restaurants and food producers and fishers and like, local means something. And now it kind of doesn’t mean anything as far as the NSLC and the Nova Scotia government are concerned. So that’s really frustrating.”