Nicolas Cage's capacity to act as though he's constantly living the most agonizing moment of his life is at least justified in Knowing.

As astronomer John Koestler, he's set off when his son's grade-school class unearths a 1959 time capsule of students' future predictions. The seemingly random series of scrawled numbers that his son received is, John is convinced, dates of Earthly disasters over the past 50 years, and a prediction of more tragedy to come.

Director Alex Proyas takes a premise reminiscent of The Number 23, with the faithless hero aspect of Signs, and turns it into compelling Doomsday pulp. At least until it gets insulting. Proyas is a skilled filmmaker who has never equalled the atmosphere of his '90s pop-art benchmarks The Crow and Dark City. The rock comedy Garage Days didn't deliver a single memorable song. And I, Robot only worked in pieces.

Despite Cage's weirdo charisma, and some well-visualized moments, Knowing hasn't many surprises left once its solid premise is established. What remains is a conclusion that echoes the religious fear-mongering of Kirk Cameron's Left Behind films. Real science fiction is about how human behaviour is affected once the variables around us change; it's an atheistic genre. Knowing starts as a goofy head-trip, and then just gets goofy.

Knowing is not showing in any theaters in the area. 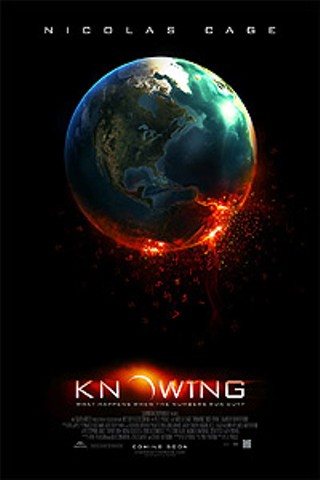