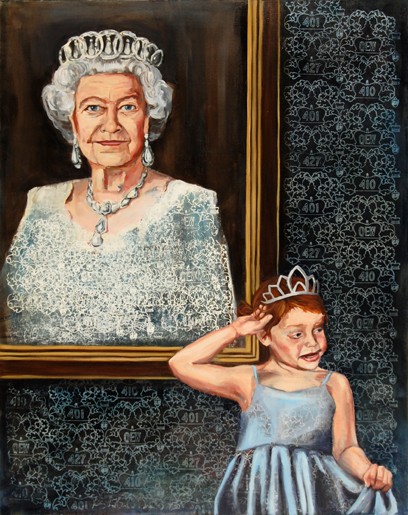 Although most Haligonians will be lucky to catch a glimpse of Queen Elizabeth II’s hat when she visits next week, artist Kat Frick Miller has been up close to her royal majesty in a more creative way.

The inspiration for Miller’s portraits of Queen Elizabeth came from all directions. The artist, who is currently part of NSCAD’s Community Studio Residency program in Lunenburg, started thinking about the role of the British royal family when Stephen Harper asked governor general Michaëlle Jean—-the Queen’s representative in Canada—-for her permission to end the parliamentary session early. “I considered how I felt, as a person, about that power, even if it’s mostly symbolic,” Miller says. The Ontario-native screen-printer and painter was also developing repeat patterns based on the province’s King’s Highway sign emblem, which has a crown perched on top. Crown symbols are all over Ontario highways, even on the provincial licence plates: “I was surrounded by it, but always in the background, like air,” she says. If you look closely at the portraits, Miller has seamlessly screenprinted the pattern as part of her paintings’ background, like a royal wallpaper.

And on a personal level, Miller relates to Liz as an icon through her 92-year-old grandmother. Although her memory is failing from Alzheimer’s, her grandmother still recalls the 1939 royal visit; lining up her Girl Guide troupe for a salute along the railroad tracks, even though the young Queen and the train would not be stopping. “For that generation, there was such reverence. She was such a role model,” says Miller.

Elizabeth’s role as an iconic figurehead is playfully depicted as she stands among dioramas of an elk, owl and beaver from the natural history museum. In another, a little girl (taken from a photo of Miller as a child) wearing a crown, plays princess in front of a traditional portrait. She has a “devilish look in her eye,” says Miller, “some think that maybe it’s mocking.”

Miller, who shares the year-long studio residency with textile artist Jennifer Green and ceramicist Katherine Thomas, will exhibit her paintings at the end of the term from August 13-19 (40 Duke Street, Lunenburg). Private studio visits can be arranged at lunenburgstudio@nscad.ca.