New Art Records helps young musical artists get their start, with a little help from old guys like Amy Milan and Dallas Green. 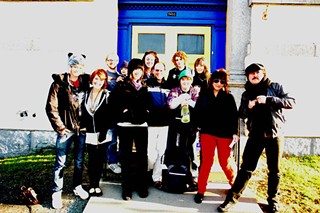 While teaching youth the musical ropes a few years ago, Malachy Kazi noticed a hole in Halifax's music scene. "There's no real strong support network for young artists; it's very frustrating," he says. So he started to patch it up. With help from a former student, Kazi built a studio in the Shambhala School.

"I didn't think about it as a label until Jonny Stevens"---from Music Nova Scotia---"said, 'Mal, you have a raw string of artists here that are amazing; you should do an album.'" And New Art Records was born.

The label, helmed by Kazi and Chance Gillis, is celebrating its first CD release Saturday at Neptune Studio Theatre. Juvenilia is a compilation of what Kazi describes as singer-songwriter/indie/rock, featuring Berend's Pages, Snow and Blackbirds, Lampshades and Offlights and artists Pat Bethune and Olivia Fader. The youth, all 15 to 19, have had visits from artists such as the Stars' Evan Cranley and Amy Milan, Serena Ryder, Joel Plaskett and, just this week, Dallas Green of City and Colour. David Christensen helped take the students through the pre-production process.

Morgan Kenney, vocalist for Berend's Pages, is now 19 and committed to being a musician, but when she met Kazi eight years ago she was just a kid learning to play the guitar. Juvenilia is Kenney's first recording experience, and despite the hard work she's looking eagerly ahead.

Karen Murphy---a grade 10 student at Halifax West, drummer for Snow and Blackbirds, and the youngest artist playing on the CD---is of the same mind.

"It was just amazing, and I've really just wanted to be in music ever since. I don't know what else I'd be doing right now."