Just the news on COVID-19 in Nova Scotia, for the week starting June 8

New C19 cases and other info bits, mostly from the province but also Halifax.

Editor's note: In its 27 years The Coast has never been a just-the-facts news service, but for these strange times this news centre offers quick-hit updates.

Gimme five (days in a row with no new cases) 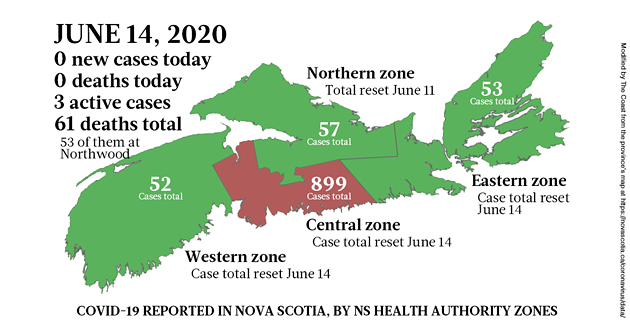 Things today are much the same as they were yesterday (after the false alarm). No new cases, nobody dead from C19, nobody recovered. There are three active cases in the whole province, none of them related to long-term care.

This makes five days in a row without a case diagnosis, Nova Scotia’s longest streak since the first cases were announced March 15. There have only been two new cases in the last 10 days.

A couple previously diagnosed cases were moved around today—the Nova Scotia Health Authority’s Central zone picking up two, one from each of the Eastern and Western zones. This is apparently routine, as we were told by the province a couple days ago when we first noticed the numbers moving around, and as is now mentioned as a caveat in the daily reports: “Cumulative cases by zone may change as data is updated in Panorama.”

Today’s report from the province includes a reminder that daycares can reopen tomorrow. The guidelines for how that works are here.

Positively false: a correction and a streak intact 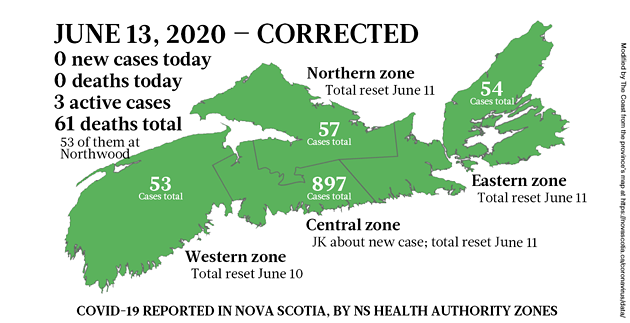 Sorry about this folks, but a few hours after the announcement that there was a new case, the province sent a correction. Apparently there was “a false positive test result,” and instead of having a case today and breaking its streak of no-case days—as we reported earlier, which you can see below—Nova Scotia just set a new record of four days in a row with no new cases, no deaths.

Above is the corrected map, all nice and green to indicate a lack of newly diagnosed cases, with no new-case red in sight. Without a case today, Northwood nursing home now hasn’t had a diagnosed patient since Tuesday, extending its own winning streak.

Note that when we say “Sorry about this,” we mean sorry for having mislead you, unintentional though it was. We are not in the slightest sorry Nova Scotia’s no-case streak is intact. That is simply amazing news, and we’re only sorry we couldn’t share it earlier. 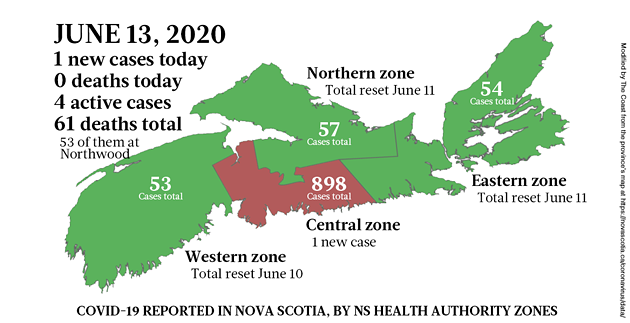 The province is reporting a new case of COVID-19 today, ending Nova Scotia’s longest streak of consecutive days without cases at three.

The newly diagnosed C19 patient is a resident at Northwood, the first new case at the beleaguered Halifax nursing home since Tuesday. “COVID-19 is still here in our province," premier Stephen McNeil said in the press release announcing the current numbers. "We must keep working together to follow the public health protocols and keep the spread of this virus as low as possible."

Since yesterday, one patient with the disease has recovered, offsetting the new case so that the number of active cases remains at four. 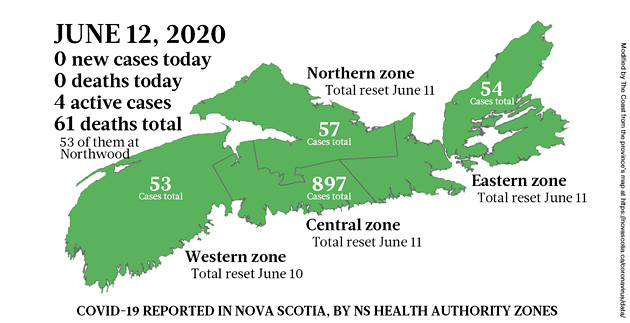 For the third day in a row, Nova Scotia is reporting no new cases and no deaths from the odious disease. This is an unprecedented, absolutely welcome streak.

Just like yesterday, there are four active cases in the province. The public is not being told where those cases are located.

Getting all of Nova Scotia’s COVID-19 case and lab info onto the Panorama system—a data merge that went live Wednesday—lead to some changes on the province’s map of where the cases are. The stated reason was a desire to make the map more relevant by showing where the patient lives rather than where the diagnosis was made. On Wednesday, 16 cases got shuffled between the NS Health Authority’s zones.

Today there was more shuffling, as the Northern and Eastern zones each lost two cases, and the Central zone gained them. The province assures us this wasn’t some sort of glitch or hangover of the big data switch, it was just the desired result of information being updated in Panorama. Or as software developers say, it’s a feature, not a bug.

We’ve updated our map with the latest info, so it matches the case totals on the province’s bare-bones version. 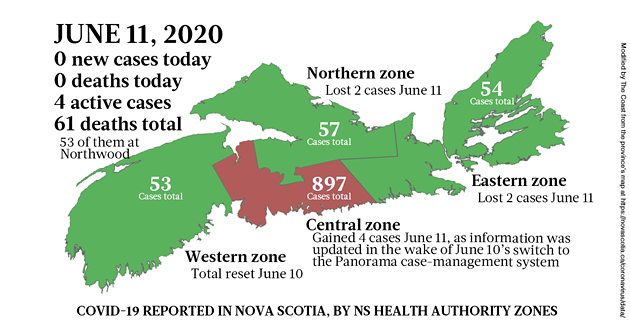 Second day in a row of no new cases

While we wish doctor Strang well on his trip to New Brunswick, the province is sending along good vibes by having no news cases and no new deaths today. Plus a patient has recovered, leaving only four active cases in Nova Scotia, none of them connected to Northwood or other nursing home facilities.

The map of case distribution isn't ready yet because the province shuffled the numbers a little bit after yesterday's data refresh. So we've asked for clarification, and will publish the current map when we're assured the numbers are correct.

No new cases, lots of news 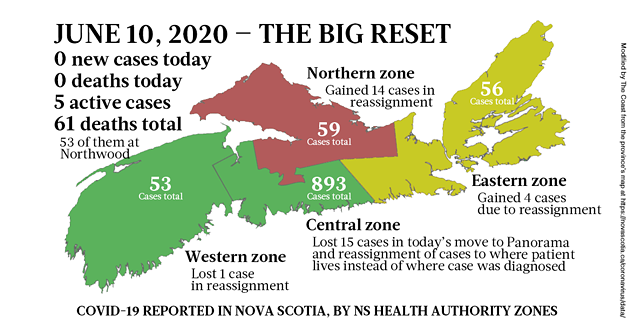 Here’s the current map of where cases have been diagnosed in the province, with the very latest “gold standard” numbers announced by doctor Strang as part of the major data consolidation announced today, to a system called Panorama. Get the full report on that, and the reason Strang and McNeil won’t be doing briefings for the next two weeks, and the magical thinking behind us not being told which health zone(s) Nova Scotia’s five active cases are in, here.

One new case and one new death are being reported today by the province. The person who died of COVID-19 is described as “a female in her 70's with underlying medical conditions in the Central Zone. She was not a resident of a long-term care home.”

The report includes a notice like yesterday’s, saying the various C19 information sources public health relies on are being merged into “a single source.” That is a system called Panorama. The merger isn’t done yet, and the province hasn’t updated its main coronavirus page in anticipation, so we can’t produce the map we usually do to show where the new case occurred.

Top doc Robert Strang is expected to talk about the Panorama project at today’s 3pm briefing. You can watch live at novascotia.ca/stayinformed/webcast, or catch it later at the Nova Scotia government's YouTube page.

Nova Scotia finally gets its act together 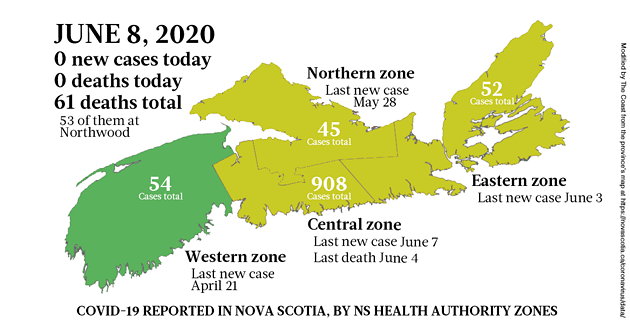 The province’s daily C19 report was late coming out—the email usually arrives between 11am and 1pm, but didn’t come until after 3pm today. We feared this meant some awful news in terms of new cases and/or deaths, but we were wrong. Zero new cases, zero new deaths to start the week off right.

However, there was an unprecedented message at the top of the report. To quote: “Data sources are being reconciled and consolidated to ensure all publicly reported data comes from a single source, Panorama, the province's public health reporting system. Updated data will be reported this week.”

Hard to know if this explains why the report came out so late, but it certainly suggests a major change afoot. A welcome change, at that.

At his regular briefings on the state of COVID-19 in the province, head public health doctor Robert Strang has faced many questions about inconsistencies and seeming errors in the numbers reported by the province. And many times he’s referred to the problems inherent in trying to collect information from several sources. He must be happy this change is coming.

We asked the province a bunch of questions about the transition to Panorama, and were told to be patient because Strang “plans to talk a bit more about this at tomorrow’s news conference.” We can’t wait.

The collection of news updates from the June 1 week is here.