Journalism is going to be OK, says Seymour Hersh 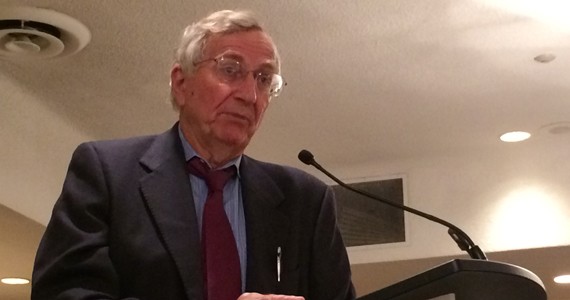 DONNA LEE
Seymour Hersh speaks at the CAJ conference in Halifax on June 6.

Whether Seymour Hersh cares about his legendary status is neither here nor there. At age 78, the investigative reporter has a body of work most ambitious journalists would likely sell their souls to assemble.

Hersh has produced material that’s been controversial, partly for mistakes he has admittedly made and for his use of unnamed sources and anonymous quotes. But his stuff has also been memorable for its uncovering of nasty wrongdoing and corruption hidden in state secrets.

It’s almost always attracted the attention of the White House, and of jealous journalistic competitors.

Let’s face it, Hersh says, if it wasn’t for journalists exposing the lies and hypocritical crap being discharged by governments, few people in this world (including potential whistleblowers) would have the opportunity and inclination to chronicle various misdeeds taking place in the halls of power.

“You just can’t do it on the inside,” he said in Halifax last Saturday.

A Pulitzer Prize-winning writer, Hersh has been a muckraking freelancer, staff reporter at The Associated Press, staffer with The New York Times, regular contributor to The New Yorker and the author of several books. He helped expose the My Lai Massacre during the Vietnam War, revealed a massive CIA domestic spying program and detailed the torture at Abu Ghraib prison.

Hersh was in town to give a speech at the Canadian Association of Journalists’ national conference. His address was delivered in the wake of his latest contentious project—a 10,356-word piece for the London Review of Books that alleges the Obama administration lied about events surrounding the raid in 2011, in Pakistan, that led to the killing of Osama bin Laden.

Supporters say his story sounds plausible and the White House could well have lied. Detractors maintain he doesn’t know what he’s talking about, saying Hersh has “lost it.” That sort of response comes with the territory, the conference heard.

After his anecdote-peppered remarks, made in a packed hotel ballroom, a relaxed–looking Hersh sat down with The Coast to chat about journalism-related matters.

Hersh likes to speak quickly and will often digress. A lot of knowledge and work details have been processed and stored over the decades, so his mind can be excused if it occasionally exhibits information overload.

Asked about stretching the boundaries of professional ethics, such as misrepresenting oneself to go undercover to get a story, Hersh said there are no occasions when ethical breaches would be suitable.

“An investigative journalist has got to be held to even higher standards,” he said.

Hersh said journalists can be politically outspoken and good at what they do at the same time. “I may have a million different views of the world, but I’m not going to distort what I know,” he says.

In his speech, Hersh covered Middle East affairs and touched on the state of the news game. He said it’s “a great business to be in,” but acknowledged there are problems regarding lack of money earmarked for investigative work and the way newsroom staffers least likely to take chances usually end up promoted by management.

Hersh, who was born and raised in Chicago, said some solid newspapers aren’t nearly as good as they once were and suggested old-school television news is “disappearing.” On the other hand, he said, electronic formats should be around for future generations, though they have experienced growing pains.

“It’s really going to be OK,” said Hersh, on the health of journalism. “It’s not so good now, but it’s going through an enormous change–our business—and I think it’s going to come out OK.”

By Daniel Glick / The Story Group

Speaking for The Coast: Foreign correspondence

On journalism and biting the hand that feeds you