Jordan Boneparty is recording things that go bump in the night

The Night Time Podcast explores the mysterious side of Atlantic Canada 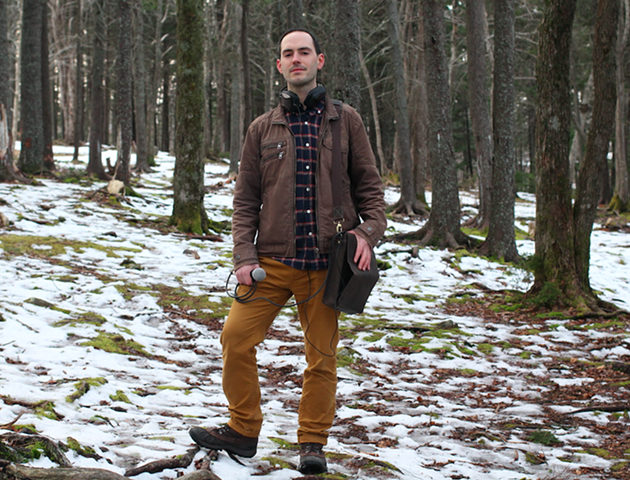 Andrew D
Jordan Boneparty had always thought about creating his own podcast, but the idea didn’t move forward until he got involved in a mystery of his own.

While walking home from work on Joseph Howe Drive last year, he noticed some papers on the side of the road. Sitting among them was an old journal:  “It just looked like something that some kid had tossed on the last day of school,” says Boneparty. But when he had a closer look, it turned out to be much older than it appeared. A mention of the death of King George VI as a current event dated the book to 1952. Boneparty researched every fact he could find in the journal to track down the original owner. With the help of Reddit, he located the author in just two days.

Two weeks later, as reported by the CBC, he was able to reunite the journal with 76-year old Eva Smith MacKay. She had not seen the journal in 63 years. Boneparty contacted the Mysterious Topics podcast—a favourite podcast of his—to tell them about the journal mystery. They invited him on as a guest to share his story. At the time, as well, Boneparty had been researching and compiling material about his grandfather’s story of his UFO sighting from the 1970s.

“My initial thought was interviewing my grandad, and trying to make a short documentary,” he says. He had also considered packaging the material as an audio story and submitting it to the Mysterious Topics or Astonishing Legends podcasts. But bolstered by his recent success, he decided to release the story on his own, as the first episode of The Night Time Podcast.

As a first-time podcaster, Boneparty had to rely on diverse skills to get his show off the ground.

“I do it all, man. The music, everything. I’m a musician as well,” he says, “Not a good one, but good enough to make that intro.” Boneparty’s background as a musician helped him with audio editing.

He started by recording himself playing guitar on a tape deck with a four-track recorder. When he and some friends formed a band, he got his first taste of digitally editing audio.

“I just got good at it. The way you edit a podcast is the same way you would edit guitar,” he says. The equipment he uses is leftover from his days as a musician. Boneparty had also dabbled in photography; he’s used his skills to create visuals that help set the show’s eerie tone. While the show now has a consistent look and sound, Boneparty admits he didn’t have a master plan.

“When I started it, I just thought it was going to be a podcast that my friends and I would listen to," he says. Now, he's got over 16 episodes uploaded on the podcast's creepy website with topics that range from mysterious disappearances to paranormal accounts and activity in the region.


“It’s not for me to judge whether or not what someone experienced is real."

For each epsiode, Boneparty lets himself get wrapped up in each story he comes across.

“If something comes up that I’m interested in, I just obsess about it. Read about it. Find out the whole history,” says Boneparty, “And then a month later I’ve completely forgotten about it.” He says some of the topics he covers are more ‘out there’ than others. But Boneparty, who describes himself as a skeptic, is careful not to weigh in on whether or not he doubts a guests’ claims.

“It’s not for me to judge whether or not what someone experienced is real,” he says. “I want to have guests tell their story, and let the listeners have the conversation about what to believe.” By following his passions, Boneparty seems to have discovered a winning formula. The Night Time Podcast was ranked 49 in iTunes’ Society & Culture section, outpacing both of his major influences Astonishing Mysteries and Mysterious Topics. Eventually, he says, "I’d like to be able to find something I can do and do it well. But it’s probably not podcasting. It’s probably raising my son.”

He says his three-year-old son is responsible for the name of the podcast. "Really it’s called The Night Time Podcast because when my son’s asleep, that’s when I have an hour or two to do this.”

Before starting his own show, Boneparty was an avid podcast listener himself. “Pretty much everywhere I go, I walk and I’m listening to podcasts,” he says. Here are a few of his favourites.

Mystery Show
A show involving small-scale mysteries, such as tracking down the original owner of a one-of-a-kind belt buckle.

Astonishing Legends
This podcast about strange happenings brings a research-based approach to the topic. It's a “must listen” for Boneparty.

Mysterious Topics
Another podcast about the unexplained. “They inspired me, because it’s just two guys talking about stuff they like,” he says.

The X-Files Files<
Comedian Kumail Nanjiani and a guest discuss their favourite cases of the X-Files. As a fan of the TV series, Boneparty describes himself as, "more of a Scully, trying to be as Mulder as possible."

Tune in to 25 for 25, The Coast's anniversary podcast