While not perfect, Jamieson’s Irish-House and Grill touches on greatness. Be sure to stay for dessert.

I've been to Jamieson's Irish-House & Grill a handful of times. I like the restaurant, and it's one of the categories in The Coast's annual Best of Food poll that I always feel like readers get right when they crown it the best of Cole Harbour. Walking in with my friend Stephen, I expect a great meal.

The inside is a respite from the mess of construction in the parking lot. It's a charming place, a muted kind of colourful, heavy on woodsy hues, rows of bottles lining bright walls and atmospheric bric-a-brac in the lounge area. The beautiful oiled wood floor offers an uneven texture on which a dozen or so tables are scattered, with comfortable couches in a seating area in the front. We watch our step as our server leads us to a roomy four-top where we can spread out.

It's only a few minutes before our server drops by again to ask if we'd like drinks. Stephen decides on a Jamieson's IPA ($6.49), while I just get a soda ($2.59). Moments later they're delivered and we place our order.

We get the Jamieson's Special Wings ($10.49) to start. They are piping hot when they arrive; too hot to hold, in fact. Seduced by the plump, glazed wings, we dig in with forks. They are batter-free, marinated and baked instead of deep-fried and drenched in a sweet and mildly spicy honey barbecue sauce. They are tender and meaty and absolutely delicious, bare bones by the end of the meal.

For our entrees, I choose Jamieson's signature stuffed chicken breast ($17.39), and Stephen gets pork tenderloin scallopine ($17.99). Both are served with seasonal veggies and we opt for mashed potatoes.

As our server walks across the room with our plates, we can't help but notice the potatoes. It's like a snowbank sitting on the plate, tall and heaping, setting a fluffy stage for the rest of the food. Both plates also have mix of fresh carrots, green beans and broccoli on the side.

The pork has a golden parmesan breading, and a tangle of crispy onions perched on top. A drizzle of a gooey honey, thyme and lemon sauce dots the plate. The sauce is simple, but hits really nice sweet and citrus notes. The generous serving of pork is well-cooked and nicely seasoned. It's good.

The chicken is a bit of a mess. The chicken is under-seasoned and the vegetables, while cooked to the perfect point of tender crispness, are over-salted to the point of almost being inedible---strange since the vegetables on Stephen's plate are fine. The sauce--- Jamieson's signature whiskey and mushroom cream sauce, has broken into a grainy, watery puddle. It's a shame as the mushroom mousseline tucked into the chicken is actually quite nice. But it's also, weirdly, not a big deal since I am lost in the fluffy cloud of starch, and quite content to fill up on the ridiculous portion of potatoes.

Having based almost all of my ordering on the all-caps "JAMIESON'S" that starts the names of a number of the dishes, I finish the trend with an order of Jamieson's Irish soda bread ice cream ($6.29), which I split with Stephen. It's good. Really good. It's slightly boozy tasting, with a hint of Baileys in the background, and the creamy ice cream combined with the chewy crunch of the crumbly bread bits is a really nice combination.

I expected a great meal; I got a good one. I wish it had been a bit better, but it won't stop me from going back to Jamieson's. Our server was fantastic, friendly and attentive, the space is cozy and calm, and while the sum of the parts of the meal wasn't by definition great, some of the parts were.

By Allison Saunders and Michelle Cameron 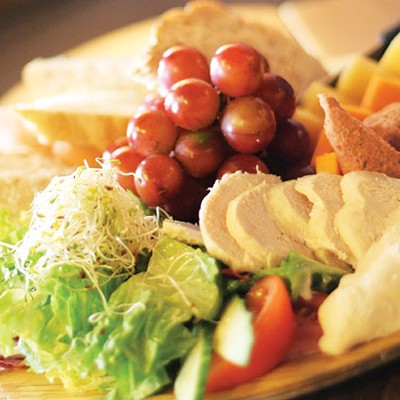