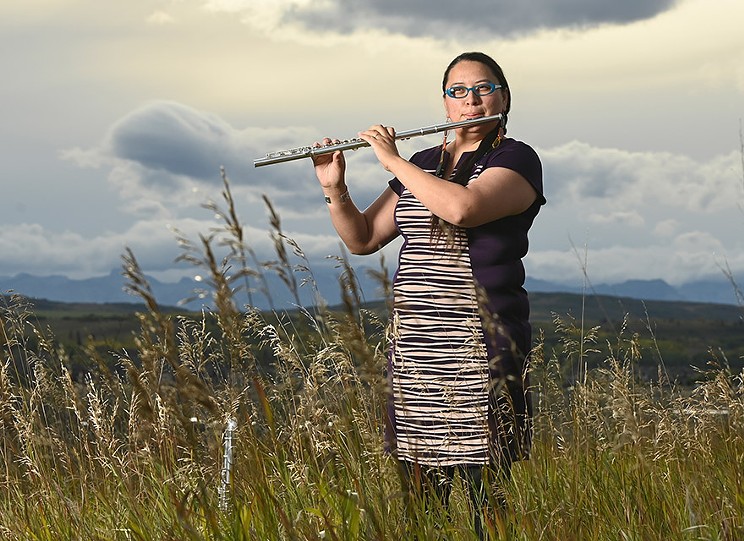 Jessica McMann is composer-in-residence of Cecilia Concerts. The work she debuts June 29 is the result of her residency.

The composer and flutist will debut a new work that asserts that the rights of Indigenous women across Turtle Island are intrinsically tied to the forests and to nature.

Multidisciplinary artist Jessica McMann didn’t set out to be a history-making composer and flutist. She took to the instrument in childhood and a natural talent kept it in her orbit, a steady yet quotidian pull like the tide. But when she takes to the stage at Halifax Central Library’s Paul O’Regan Hall on June 29, though, the tide will be coming in as history is formed in sonic waves: McMann, who is Cree, will debut a new commissioned work alongside Anishinaabe pianist Beverley McKiver and Cree/Nehiyaw violinist Karen Shepherd.

“I think that we are carving out spaces that are inhospitable to us. And we are part of an emerging community of Indigenous people—musicians—who are classically trained and live in this classical world,” McMann says, speaking by phone from the prairies, where she is based. “We're playing our own music in this world.”

The class of Indigenous composers McMann finds herself amongst—a scene she first discovered around roughly 2017—aren’t “like, ‘Oh, I'm gonna take this Beethoven piece and try to change it’,” McMann explains. “It was like they're creating their own music. And I really liked that.”

McMann’s foray into composing began with a looper pedal and a beat machine (a far cry from her current resume, which sees her touring North America and Europe, creating commissions for multiple Canadian institutions and being a Laureate of the Hnatyshyn Foundation REVEAL Indigenous Art Awards). She keeps the bedroom pop origin alive in her current practice—even if the classical instruments she writes for don’t bely these beginnings—by dedicating 10 minutes a day to improvisational music-making, building outwards from self-made prompts like a lo-fi beat. “I find that’s a really comfortable spot to start creating my new works from,” she says.

The piece being debuted at Wednesday’s free show also stemmed in part through improvisation, before becoming a three-piece, classical-adjacent number that carries many heavy themes on its broad back. The work asserts that the rights of Indigenous women across Turtle Island are intrinsically tied to the forests and to nature—a recurring idea in McMann’s work. “I started from this post-apocalyptic world in my head,” McMann says. Imagining the landscape of the Alberta badlands and what might’ve come before, she built a soundscape that serves up “the strengths of Indigenous women, the revitalization of land, Land Back, land being given back and giving the stewardship back to Indigenous people.”

After audiences witness McMann perform with McKiver and Shepard onstage, McMann hopes “that they’ll feel something. I always like hearing from people when it hits an emotional core within themselves…I hope people come away and go ‘Oh, I’m going to think about this differently now.’”