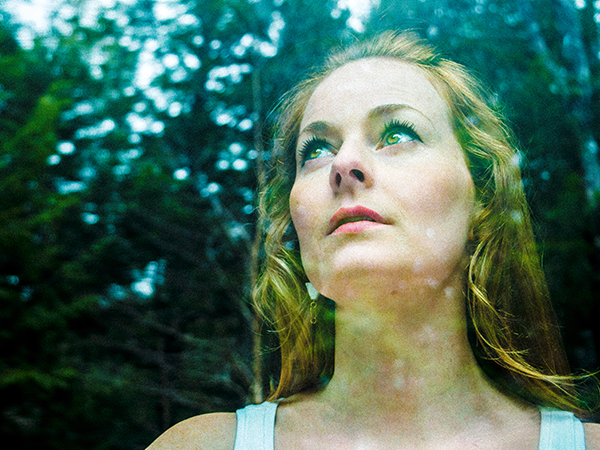 The singer-songwriter was surrounded by activity at her home: Her husband and consistent collaborator, producer Daniel Ledwell, was taking down holiday decorations; their son, one-year-old Gus, was in her lap. Her attention shifting between Gus and the frozen lake in the distance, Grant told me about a track she'd made at the end of the "hardest and most amazing year" of her life: a year that tested her strength and shifted her outlook as a musician and as a person.

Grant has written prolifically over the past 15 years—a catalog of folk songs, variously hued, all buoyed by her effortless, luminous voice. But this song, she says, felt different. It was co-written with songwriter Robyn Dell'Unto—something Grant says she has only recently started trying—and came out of "really big conversations" the two shared during their sessions.

Grant's always had a sort of watercolour sensibility to her songwriting, letting big feelings—love, loss, hope—bleed into one another. With Dell'Unto, and after 2019, she says, the feelings in her songs stayed vivid but the details got sharper.

Gus was born the previous December, then came Love, Inevitable, her seventh and boldest album, recorded in Portland with producer Tucker Martine and released last May. Between postpartum emotion, touring with an infant and navigating new boundaries between public and private, Grant says the past year took a lot out of her. But she came out of it feeling "stronger than before."

Though she wrote the album before she even knew she was pregnant, you can hear her personal strength and commitment to hope on Love, Inevitable. It's in the lucid texture of the music, in the way Grant's voice can float up into melody and brighten even the most somber lyrics.

You can hear it even more in her newest material. Last Friday, Grant released the song she was describing back in December. "Happy Birthday, Baby" is ostensibly about Gus' birth and is filled with specific memories of maternal expectation: winter baking, endless knitting. But it is the song's opening that strikes the most: "I threw stones out into the ocean/Making wishes for you to just to come on home." Her songs aren't all that different from those stones she throws—expressions of hope, ripples of feeling.

This weekend, she's playing her biggest hometown show since Love, Inevitable dropped last spring: a celebration of love on Valentine's Day with openers Don Brownrigg, Kim Harris and a bouquet of other special guests. But beyond a couple more shows in Montreal and Ottawa—and with her second child due in June—Grant isn't entirely sure where she'll go next. Some days, she wonders about trying something new ("Maybe I'll be a nurse!"), but then, she says, a peer's song can come on the radio and immediately remind her why she makes music.

I marvelled at how calm she felt in a sea of uncertainty, at the sense of trust she seemed to place in the world around her. "You might as well trust it," she said, eyes lifting from Gus to meet mine. "I don't know what my other option would be."