Jazz Fest: Samba Nova and NSCC in the Afternoon

Samba Nova marches to its own drumbeat

If it wasn't for the matching green shirts and the colourful drums of varying sizes they held in their hands, one would never guess that the members of Samba Nova were all part of the same muscial posse. The Brazilian percussion collective is a multicultural, multi-generational group, with members ranging in age from 20 to 72. Yesterday, at the Halifax Jazz Festival's main tent, Samba Nova delivered a free demonstration of the fact that nothing unites people quite like a killer beat.

Or, in the case of Samba Nova, many beats. With bandleader Carlos Pessoa at the helm, the 20-odd players blended deep bass, snapping snare and rattling percussion sounds with airtight precision. By rights it should have sparked an all-out boogie session, but the early afternoon time slot and the arresting mesmerizing nature of the music had the audience more in trance mode than dance mode. Instead, smiling faces and stomping feet were proof positive of the crowd's appreciation for the Samba funk, maracatu and Celtic-Brazilian mashups Samba Nova doled out.

The everybody's-welcome party vibe was true to both Samba's origins and Samba Nova's mission, Pessoa said after the show.

"We just try to play drums and have fun." 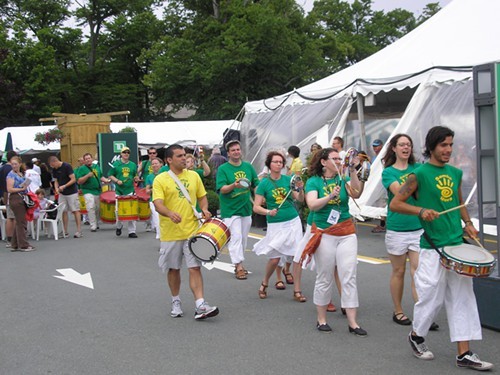 For anyone who missed yesterday's fun, it sounded something like this:

Samba Nova, Pessoa noted, holds Saturday afternoon workshop sessions from 2-4 p.m. at St. Matthew's Church, so anyone join in with the beat.

Pessoa's group put a Brazilian spin on jazz. But for those purists who believe the only true jazz is basic horns, keys and bass, the NSCC Jam at Stayner's Wharf later in the afternoon served up the goods.

Bad, single-bridge-related traffic delayed the start of the program, but under the watchful eye of NSCC instructor and local musician Jeff Goodspeed, pianist Siobhan Martin, saxophonist Andrew Black and bassist Billy Taylor Habib soldiered on with a series of jazz standards.

"The (NSCC) program has a variety of music, but when you just get the three of us together unrehearsed, it's better to stick with something we know we can all do," Black said before the show. 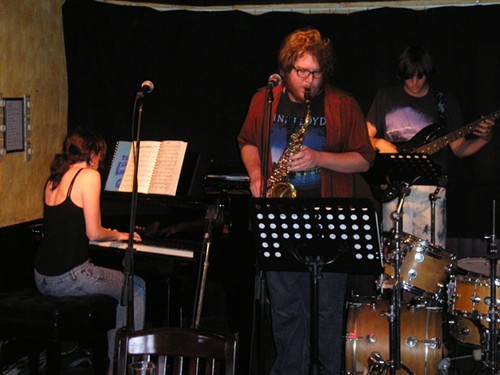 The slow, sultry tunes provided a welcome soundtrack to a quiet afternoon at the pub, as well as a nice contrast to the banging beats of the Samba Nova show.

My only complaint was that the people at the table behind me didn't feel the same way. One woman in particular chatted above the music throughout the set, as if the band was a hurdle of sound to be leaped over. I get that it was a restaurant environment and not everybody came for the music. But have a little respect for the folks who are trying to entertain you.