The Bayer’s Lake cafe has 630 different flavour combinations, ready when you are. 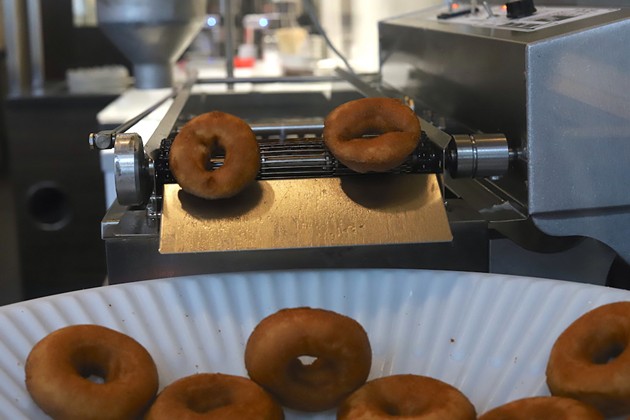 Victoria Walton
The "donut robot" spits out two freshly cooked vanilla spice cake donuts.
The “donut robot” at Jagger’s Cafe can churn out over 700 donuts an hour. “On a busy day the machine doesn’t stop,” says Jagger Winterbourne, co-owner and namesake of the Bayer’s Lake spot that first opened in March of last year.

Batter gets poured into the top of the small but mighty donut machine, which then plops donut shapes into the hot frying oil two-at-a-time. As they automatically flip down the line, the donuts get perfectly fried on each side, finally falling into a basket at the end with a light golden-brown crust and a satisfying thud.

Victoria Walton
“You can watch them funnel through and get made, and then you take them off and it’s completely fresh. So your donut will be five minutes out of the fryer, and you can pick your toppings,” Winterbourne says.

The donuts themselves are all identical—vanilla spice cake donuts. But from there, the flavour combinations are left to your imagination.

Victoria Walton
A condiment station not unlike the Subway sandwich artist's palette, only with sweeter toppings.
Customers can use Jagger’s donut order form to select icing flavour (five to choose from including vanilla, hot fudge and maple), toppings (15 options including bacon, sprinkles and graham crackers), and drizzle flavour (six to choose from including chocolate, peanut butter and caramel).

Donuts are made on the spot in front of you, and never sit around for longer than an hour. “You can have it exactly the way you want, which makes a ton of difference,” says the cafe’s general manager Matt Dingwell.

Victoria Walton
Jagger's donut of the week for January 11-17, the strawberry shortcake donut.
For the uninitiated and overwhelmed, Jagger's has a list of “fan favourites” and pre-set flavour combos for half-dozen or full dozen orders. There’s also a featured donut of the week that is constantly changing. “Every Monday we come up with a new one,” says Dingwell.

For now, the donuts are not gluten-free or vegan, but Winterbourne and Dingwell say they’ve recieved lots of requests for both. “You’d need a whole separate fryer, basically, to do the different kinds of donuts,” says Dingwell, adding that they hope to introduce them in the future.

When Jagger’s opened in March, the first wave of COVID-19 in the province shut them down just five days later. It was tough, but the timing wasn’t good in the long run. “We were just getting started, so it was a lot easier for us to adapt to the new Covid environment than it would’ve been for a business that had been set up for years,” says Dingwell.

The cafe managed to set up on DoorDash and Uber Eats, and find ways to promote take-out and delivery. “We did a month closure and we figured out kind of how to reopen and how to approach the guidelines,” he says, sitting at a table in the cafe one day in January, a week after dine-in service re-opened in HRM.

“How we’re looking at it, if we’re a new business able to open up and make it through Covid, we’re going to be fine afterwards,” says Dingwell.

Before opening, one of the biggest challenges for Winterbourne was finding a location for the cafe because of the amount of competition from large chains.

“It was very hard because a lot of the places we’d go they put limitations in where you can’t be so close to a Tim Hortons or a Starbucks,” he says. When Winterbourne finally found the location at 120 Suzie Lake Crescent, he wanted to do even more than just donuts.

Victoria Walton
Owner Jagger Winterbourne beside freshly made donuts at Jagger's Cafe in Bayer's Lake.
“We took it as inspiration to turn it into a whole, full service, full-experience of an establishment where we have everything from drinks that you would see at places like Starbucks, to food items like sandwiches and wraps,” he says.

But the donuts are still the star of the show. And unlike chain cafes, the donut robot is working all day long. “They make one batch in the morning, they sell out they sell out and they sit there all day,” says Dingwell. “Whereas we make small batches all throughout the day. People call at 7 at night and be like is it too late to get donuts? Nope, you can get as many as you want. Any time of day, always going to be fresh.” 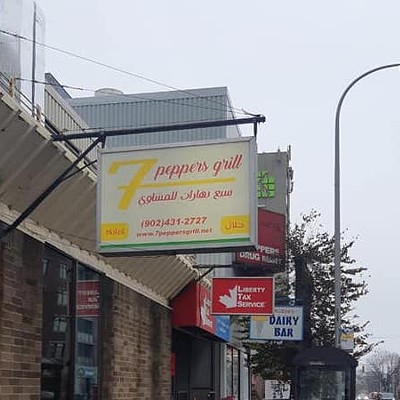