The survivor of human trafficking tells her story to help others learn.

MEGHAN TANSEY WHITTON
The Teen Sex Trade: My Story is available September 1.
When Jade Brooks was 15, she thought she met the love of her life. He wooed her, bought her gifts, took her on dates and told her that he was in love.

Looking back now, she recognizes him as her trafficker—the man who manipulated her into moving from her home near Uniacke Square and selling her body in massage parlours and strip clubs throughout Toronto and Montreal.

Poet, activist and now author, Brooks is turning that trauma into teaching with the release of her first book, The Teen Sex Trade: My Story.

Human trafficking in Canada is not talked about as often or as seriously as it should be, says Brooks. Her upcoming autobiography is an opportunity to change that, and share her story as a survivor in hopes of educating and protecting young women across the country.

“I know how many girls this happens to where I’m from, and I figured it must be happening to girls in other places,” she says. “I just want to bring that awareness so people can make a conscious and educated decision when dealing with someone who is trying to introduce them to the sex trade.”

One of five children, Brooks says her parents did what they could to take care of her and her siblings. But drug addictions and domestic abuse led to her being taken into foster care at age 11. She cycled through group homes and foster families until she returned to live with her mother at age 15.

By then, Brooks had already met the man who would become her trafficker.

“It’s not normal,” she says. “I want people to understand, especially within the Black community, that this is not normal.”

Brooks says abusive behaviours like domestic violence and human trafficking were normalized in the areas where she grew up, and this normalization only added to the problem.

“Pimping is an issue that doesn’t just start with that single person. A lot of the times the pimp has the same vulnerabilities as the victims, they’re just using those vulnerabilities in different ways,” she says. “They didn’t choose the circumstances that lead up to that point, and that’s what makes me sick.” 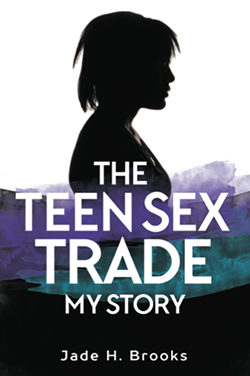 Often, sexual exploitation is introduced after a period of grooming. Brooks calls it the “honeymoon stage.” The trafficker fills the victim’s needs in order to gain a foothold for manipulation. Brooks can remember hearing stories in her community about the sex trade, but never being taught what to look out for.

“I was given kind of a warning from my mom, but it was never an in-depth conversation,” she says.

At the root of the human trafficking problem in many communities is a reluctance to name and discuss the issues that perpetuate cycles of abuse.

Leaving this generational trauma unspoken, however, stands in the way of education that could help protect young people from becoming entangled in abusive relationships. For Brooks, it took moving away from her Halifax communities and meeting with a therapist to realize that she had been a victim of human trafficking, and not simply a relationship that went wrong.

“I thought that because he hit me or was aggressive or loud, it was because he cared and was frustrated with me,” she says. “I started understanding that no, that’s not love. That’s not normal. That’s not OK.”

It’s this kind of awareness Brooks hopes to spread with her book, which she began writing as a way to process the trauma she endured.

“It was another trauma within itself, just reliving it,” she says. “I didn’t realize how much I remembered until I sat down to write. I definitely cried a lot. I definitely had to put it down a lot.”

At the same time, Brooks found that writing the book gave her a chance to heal, to forgive and gain a new perception of her  experiences.

“It was very liberating because I was able to understand more about myself from writing it down,” Brooks says. “It’s something that I’m going to have to carry for the rest of my life, I really believe that, and I’m just thankful that I can carry it in a healthier way now.”

Looking forward, Brooks is excited to share her story, bring awareness to the issue of human trafficking in communities all across Canada, and to continue to support other victims and survivors of sexual exploitation.

She encourages everyone who reads her book to practice self-care as they read, and understand that her story does not come from a place of anger, but from a desire to bring education, awareness and an end to the issue of sexual exploitation in Halifax and across Canada.

The Teen Sex Trade: My Story will be available at Chapters and Indigo locations across the country as of September 1.