An open letter to Tom Mulcair, Elizabeth May
and Justin Trudeau. 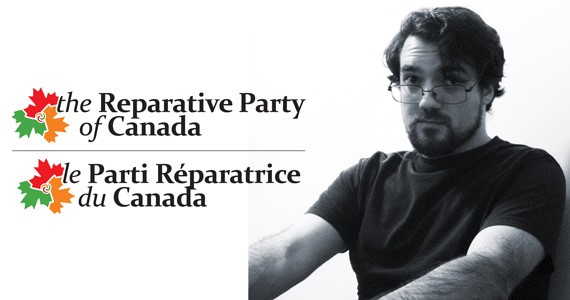 This election need only focus on a single issue: Canadian democracy is no longer functioning. By merging the Canadian Alliance and Progressive Conservative parties in 2003, Stephen Harper and Peter MacKay broke the electoral process of our country. The majority parliaments of the Harper Conservatives have been falsely obtained, and hold the support of a dwindling minority of Canadians. This is disheartening and depressing, and is the root cause of voter apathy. We implore you to set aside your differences and merge your parties for the sake of Canadian democracy. Not only would this surely have the support of voting Canadians, it would give the 40 percent of Canadians who do not vote a viable option to address our concerns about the way this country has been run for the past decade.

In watching the Maclean’s National Leaders Debate, there is a clear line separating the three of you from Mr. Harper. It is also clear that you are stronger when working together. A united left, pledging to work together amongst themselves and with the opposition after the election, keeping each other in check and restoring free votes on the parliamentary floor—that would be a beautiful democracy. Canada does not want a solitary figurehead to command us. We want leaders who are willing to work together to repair our lost Canadian values. Not to mention working with Perry Bellegarde of the Assembly of First Nations and Gilles Duceppe of the Bloc Quebecois to make amends for this country’s wounded past. And so, you call this new party The Reparative Party of Canada.

From Merriam-Webster:
“reparative
“1. of, relating to, or effecting repair
“2. serving to make amends”

By casting aside the nomenclature of our corrupted political past, you will gain the confidence of the Canadian public. Do we want to keep and conserve the current processes and policies of the Canadian parliament and senate? Or do we want to abolish them and repair Canadian democracy and values? Please consider this seriously and sincerely. Frankly, how could you not want to be a part of this revolutionary opportunity to change the future of our country for the better, together? Mr. Harper has given you the gift of time. Call your MPs and figure out a way to make this happen.

PS: I designed a logo for you. No charge.

PPS: Megan Leslie, please pass this on to Mr. Mulcair for me. Thanks!

———
Voice of the City is a platform for any and all Halifax individuals to share their diverse opinions and writings. The Coast does not guarantee the accuracy of, or endorse the views of those published. Our editors reserve the right to alter submissions for clarity, length and style. Want to appear in this section? Submissions can be sent to voice@thecoast.ca.