It’s fiddlehead season, and they’re in danger of being over-picked

Victoria Walton
If you’ve ventured into the woods this spring, you may have come across the east coast delicacy that is fiddleheads.

They usually pop up along streams or other water sources in small groups. If left unpicked, they’ll unfurl to become ostrich ferns. But for two or three weeks in May each year, fiddleheads are found at farmer’s markets stalls and even grocery stores.

And it's all thanks to foragers like Fred Dardenne.

“Fiddleheads, personally it’s a very very small business for me. I buy probably I would say only 60, 80 pounds every year, because there is a lot of foragers in this area for that,” says Dardenne, who moved to Halifax from his native Belgium for the diverse landscape of wild food.

“It was a good area for a lot of the wild foods such as greens in the forests, greens along the coast, berries, seaweed. It was very good for nature,” he tells The Coast.

But in recent years, Dardenne has noticed how saturated the local foraging market has become.

“If it was eight years ago, it was only me in the city for the chanterelles. I did approximately 300, 400 pounds a week. But after that, when you have a lot of people, when they come in the market with chanterelles, the price is lower,” he says.

But it’s not just his own business he’s worried about. With wild food, there’s only as much available as nature grows.

Dardenne says foragers should ask themselves questions. “If I take this kind of product then can I have that the next year? After two years, after three years?” says Dardenne. 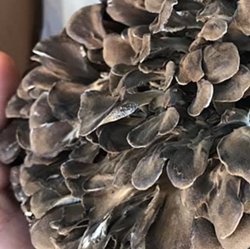 Fred Dardenne
Maitake mushrooms
Most common in the Halifax market right now is mushrooms. From chanterelles to maitake, restaurants across the city are buying from many foragers. “The mushroom is certainly the most popular product. And after that, I would say seaweed,” he says.

According to the Canadian Food Inspection Agency, foragers need to keep a record of who they sell to, and what product.

“If I sell one product to a chef, I want to make sure nobody would be sick with my stock,” Dardenne says. For fiddleheads specifically, safety is an issue, as they can be poisonous if not cooked correctly.

“When you sell this kind of product to the chef you need to tell them to be safe. When you boil them you need to boil them 20 minutes,” Dardenne says.

Many wild foods have similar safety issues. For example, forget-me-not flowers are edible, but only in small quantities.

“You can eat probably two, three, four flowers on a plate. That’s wonderful when you have some flowers on the plate. But you can’t eat a full plate with a lot of forget-me-nots,” says the forager. “The same with the seaweed. Seaweed you can eat a small quantity every day, you can’t eat a lot of it.” 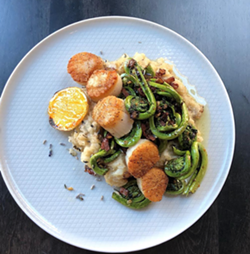 Julep
Julep turns fiddleheads into a work of art in this scallop dish
Some of the restaurants Dardenne supplies to include the Prince George hotel's Gio, the Ostrich Club, and Julep.

“I dropped this year 17 pounds [of fiddleheads] to Julep and 15 to Ostrich Club, that’s it,” he says. But other foragers operate on a much wider scale, buying up to 5,000 pounds of wild ramps, which grow in Ontario, to sell to their clients.

As Dardenne forages less and less himself, he still has connections to about 60 other foragers across Canada, many who just focus on collecting one specific plant.

Some people, says Dardenne, "take only one kind of mushroom during the year." And others "take only the morels on the west coast, and they pick only a small quantity of some product."

They find the products by having access to private land, since Crown land is often picked over.

But in recent years, more and more of these land-owners are realizing the profit in wild foods and are selling their goods themselves. “If you go on Kijiji you will have 10 people, they want to sell the fiddleheads,” Dardenne says.

As fiddlehead season winds to a close this week, morels are next in season. But Dardenne also is moving away from foraging as the market becomes flooded with other vendors to things like cheese and foie gras, instead.