CD Plus and Taz shower you with in-stores 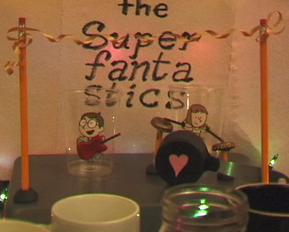 The Superfantastics in their cute cup form

Who among us could imagine a world without record stores? Without records, our evenings would be staid affairs, and I would certainly look less dignified standing beside a non-existent record collection with a brandy snifter for my yearly portrait. Give thanks for record stores everywhere on International Record Store Day. CD Plus and Taz both have special events planned, see The Lodge and The Bad Arts perform a free in-store show at CD Plus Saturday April 18 at 2pm. The Lodge's new record, Take That, Devil is scheduled to be released on April 21, but will be available for early purchase for all attendees. Ryan Patey, former Sam the Record Man employee and local booker was enlisted by Taz Records co-manager Scott Cochrane to help organize Taz Records’ festivities this Saturday (at 1pm), featuring The Superfantastics, Laura Merrimen, Save September and surprise guests. “Taz was nominated by CBC Radio 3 (well, the "people" nominated them) last year as one of the best record stores in Canada, so we thought it would be a good idea to celebrate the day with a bunch of local artists,” says Patey. “With the way things are going it is incredibly important to show appreciation for independent record stores. Music is all about diversity, and it is only in great independent record stores that you can find that. The big chain stores concentrate on the top 40 and the artists they have exclusive deals with while places like Taz maintain shelf space for such local artists as Garrett Mason (his Juno-winning blues album is currently only available at Taz). Plus, the people that work in these stores live and breathe what they do. They can give you a history lesson for hours based on a single song on a random 45.” Whether or not you want the lesson, I imagine. Oh snap! Patey also mentions the possibility for more in-stores, International Record Store Day or no. “We did a few in-stores last summer, and they went over well, so I suspect we will do a few more as the weather warms up. “ Now the weather just has to comply.