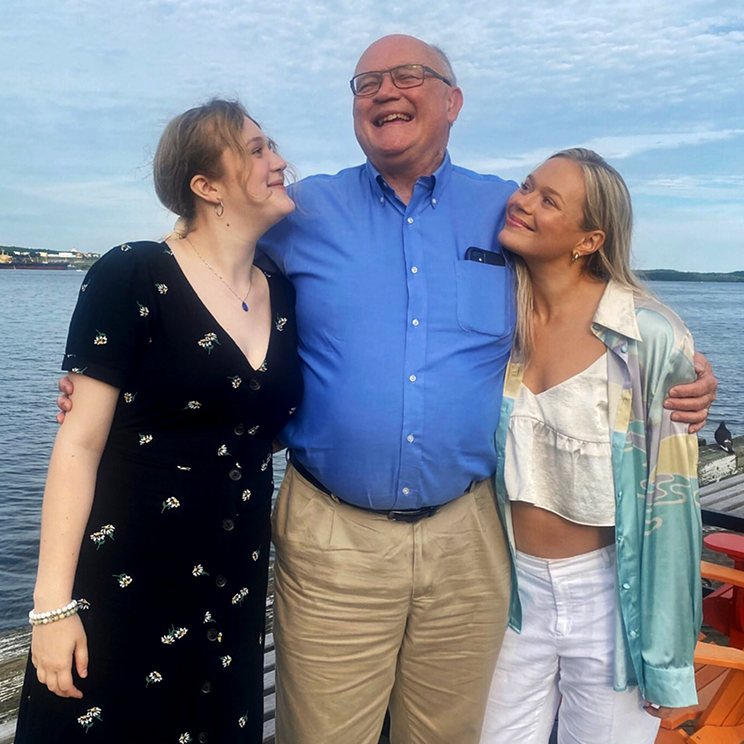 submitted
Robert Strang and his daughters Emma (left) and Alex after a family dinner out—one that got interrupted by an anti-vaxxer.

Inside the first family of Nova Scotia’s pandemic

Emma and Alex Strang tell us what it’s like sharing your dad with the whole province.

Eighteen months ago, Alexandra and Emma Strang’s father was just your average dad. “He loves dad jokes, and makes terrible crazy ones all the time,” says Emma, 17, who just graduated high school and is teaching at Neptune Theatre for the summer.

An avid reader and former rugby player, he is famous in the family for his walking skills. House lore holds him up as a power walker who leaves everyone, except maybe elder daughter Alex, in the dust. And he’s got the resume highlights of a traditional WASP provider: doctor, coach, quietly religious man.

The disease slows down, and so does doctor Strang: With COVID stable and Phase 5 coming up, Strang has stopped regular briefings.

Dr. Strang pens letter to NS families to encourage student vaccine uptake: About four weeks ahead of the first day of class, Nova Scotia has yet to release its back to school plan.

But when the pandemic hit Nova Scotia, the province turned to the fast-walking jokester, who works under the inscrutable “chief medical officer of health” job title. As head of public health, Robert Strang directed an effective, no-nonsense campaign against COVID-19 that quickly made him a well-known and beloved public figure.

“It’s just a little strange that everyone knows who he is now, because to me he’s just like—dad,” says Emma. “He’s just very goofy. He’s not at all the kind of serious, stern person he seems like. He’s very goofy and kind of weird.”

For the Strang family, which also includes Strang’s wife Stephanie and 15-year-old son Thomas, who has autism, it’s been a whirlwind ride.

“It’s weird and it’s also fun. It’s funny to me, I don’t really take anything seriously, but it makes me laugh,” says Alex, 26, who’s finishing law school at Dalhousie University and works at the Legal Aid clinic. “He’s just the biggest goofball to me.”

Strang’s been in the public eye before—notably during a mumps outbreak at Halifax universities in 2009, and when cannabis was legalized in 2017—but never like this, and his kids were younger then. Last March, their dad was whisked away to frequent briefings and was suddenly attached to his work phone, dealing with emails that never seemed to stop coming in.

“I don’t know if he’s actually colourblind, or just really bad at colour, but when we let him pick out his own outfits he tends to pick things that really don’t match.”

“Even when he’s technically not working, he’s always working. There’s never been a time where he’s not still having to respond to emails or take calls. His work phone is always on him, he’s always engaged with something COVID even if he’s not technically sitting in the office working,” says Alex.

“A lot of the time he’s here, because he was working from home, but also we would see him for dinner at the end of the day,” adds Emma, who still lives at home. “So he was here but really not here.”

Emma and her mom frequently help pick out Strang’s outfits and make sure his trademark ties match. “I have become his personal stylist, kind of,” Emma says. “I don’t know if he’s actually colourblind, or just really bad at colour, but when we let him pick out his own outfits he tends to pick things that really don’t match. So I’ve started, I will pick out a tie and a shirt and a jacket, and I’ll even do pants too because he’ll try to wear beige pants with everything.”

The 61-year-old public health official’s kids have also sometimes wished they could correct his slang. “There was a time he said he wasn’t very techno, when he was trying to say that he wasn’t great with technology,” laughs Emma.

Like any good dad does, Strang has occasionally embarrassed his kids. “When he tweeted his nasty feet, I was like ‘no one needs to see this, the world does not need this. Take your feet off Twitter,’” says Alex, who now plans to get him a pedicure for his next birthday.

He’s even mentioned his kids in a few press conferences, saying “my kids would kill me” if he gave out any COVID-friendly dance moves when The Coast asked last month.

Back when doctor Strang first went viral online, the two say he was overjoyed. “The funniest part about it honestly is just my dad’s reaction to it, because he is so excited,” says Emma. “He was so excited when he saw the first Doctor Strang meme, he was like ‘Look girls, I’ve been memed!” Strang still often sends memes (of himself) in the family group chat.

Strang even created his own COVID catch phrase without any help from his media team: “Roar back.” Emma says, “he came up with that all by himself, and he was very proud of himself when that started to catch on.”

But celebrity—even of the public health variety—comes at a cost. In late June, when the family was out for dinner on the waterfront celebrating Alex’s birthday and Emma’s graduation, they got interrupted by someone who didn’t agree with Nova Scotia’s health policies and started filming Strang and his family.

Shoutout to the guy on the waterfront last night who started videoing us out at a family dinner while yelling about hydroxychloroquine, that was really fun and not at all creepy or intrusive

“That’s definitely upsetting, I got really angry,” says Alex of the experience. “Luckily, I think that’s the first time it happened when we were out as a family,” Emma says, but it’s happened to the doctor alone recently as well.

While Strang has always kept a level head, even when asked the most grilling questions during the province’s livestreamed COVID briefings, his family wasn’t ready for the same type of scrutiny.

T he Strang daughters sound wise beyond their years, but still worry about their dad, who also battled skin cancer last year near the start of the pandemic, adding personal health concerns on top of worrying about the health of almost a million Nova Scotians.

“It's tricky, because not everyone is gonna like everything he does all the time, and so it's hard to step back,” says Emma. “I recognize this is how it works, being a person more in the public eye, and I can't go fight people on Twitter for him.”

Yet through it all, doctor Strang’s personality, along with his dad jokes and unique ties, have shone through.

“He says, ‘Oh I took vacation days.’ But it doesn’t count if you’re responding to 800 work emails a day. That’s not vacation, don’t count that as a vacation day!”

“It’s been nice in a way that, like, I know my dad ’s awesome, and I am able to see all the hard work he’s doing every day,” says Emma. “So it’s nice to be able to be like ‘hey look at all these nice things people are saying on Twitter.’ It makes me happy that he’s hearing that people appreciate him.”

Twenty-two of Strang’s ties even made their own appearance on display at the IWK as part of a holiday fundraiser last December. The tree that incorporated them sold for $8,250. Strang has also rappelled down a building to raise money for the Make-a-Wish foundation, and there are both a Dr. Robert Strang Community Hero Award and a Dalhousie scholarship created in his name.

Now that Nova Scotia is well on the way to having 75 percent of the population fully vaccinated, allowing newly elected Tim Houston—the third premier of the pandemic—to aim at September 15 for the province to drop most public health restrictions and enter Phase 5 of reopening, the girls are hoping to have their dad back, full-time.

“It feels like things are starting to wind down, but it almost feels like I’ll jinx it if I say that by fall things are going to be quiet,” Emma says.

Alex and her friends are trying to convince the doctor to go on a pub crawl once he’s got more free time, but they mostly hope Strang can get back to some of his hobbies. “He really likes reading biographies,” says Emma. “And historical non-fiction books. He read a very long five-book series one time on the building of Canadian railroads.”

And both Emma and Alex agree, he really needs a post-pandemic vacation.

“I really wanted to be like, throw your phone in the lake for a weekend,” says Alex, laughing. “He says, ‘Oh I took vacation days.’ But it doesn’t count if you’re responding to 800 work emails a day. That’s not vacation, don’t count that as a vacation day!”

“It’s hard for anyone to work for this long at such a sustained level of intensity,” adds Emma. “So I’m excited for him to be able to take a little bit of a break and just rest.”