Curating the first exhibition of solely Afro-Indigenous artists in Halifax since the 1990s, Jade Byard Peek wishes to inspire. 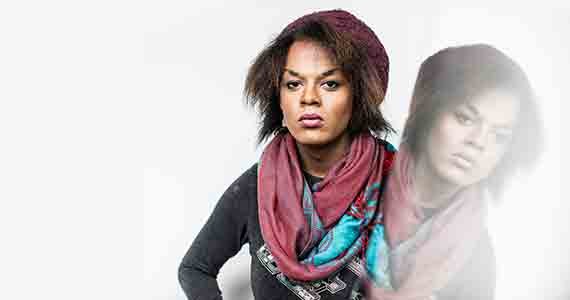 Jade Byard Peek can meet an hour after the interview request. She's running on a tight schedule but that afternoon she has a rare hour to talk, maybe the only one she'll have that week. In addition to her studies at NSCAD (a degree in art history focusing on Black and Indigenous methodologies, social criticism, art education and curatorial practice), Byard Peek—a Mi'kmaw and Black woman of trans experience—is a multi-disciplinary artist and performer; sits on the NSCAD student union and is the provincial and national women's representative for the Canadian Federation of Students; is a community activist; a frequent panelist and guest speaker in universities and conferences; and is currently co-organizing a Black Lives Matter reading group at the Khyber Centre for the Arts.

Recently she's taken on the role of curator for the upcoming exhibition We are the Griots (Anna Leonowens Gallery, February 13-18). Featuring works by Byard Peek (who has a background in painting and performance) and collaborators Michael Davies-Cole and Bria Miller, the exhibition will centre on contemporary Black experiences framed by Afro-Indigenous (Black Nova Scotian) histories. According to Byard Peek, it's also the first exhibition of solely Afro-Indigenous artists that Halifax has seen since the 1990s.

But for Byard Peek visibility also means a widespread representation of Black Canadian history in our education systems. "Black history"—in Canada—"is skewed, it's misrepresented, it's distorted, and it's from a Euro-Canadian and British Canadian legacy of saving refugees. Specifically loyalists of the American revolution," she says. "Africville gets called Canada's hidden racist secret. In my community it's not a secret, and the repercussions of that are ongoing."

From both African Nova Scotian and Indigenous ancestries, the artists in We are the Griots see the upcoming Canada 150 events as a time to confront these skewed histories. Indigenous activists and allies across the country are already pushing against the colonial narratives of the anniversary, but Byard Peek hasn't seen any call-out from the government asking for Black perspectives or seeking to showcase Black arts. "That's the reason I wanted to do this show in the first place," says Byard Peek. "I was frustrated at NSCAD not learning Black Nova Scotian art, our history should be represented."

Reclaiming the term "griot," an anglicized French term for West African knowledge-keepers, musicians, storytellers and historians, the artists in We are the Griots position themselves in that role: showcasing artworks that speak to Black Nova Scotian lived experiences and bringing underrepresented histories to the forefront.