Propeller steps out of its comfort zone with its latest concoction 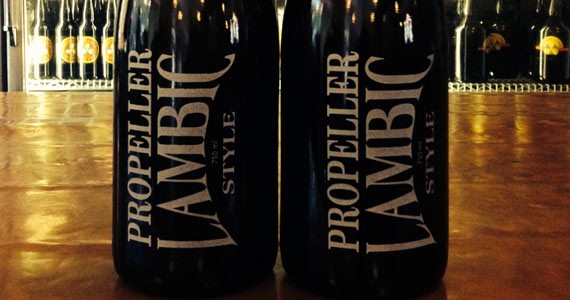 Anyone who's lived in Halifax for more than five minutes knows how hard it is to keep a secret here. But since 2011, the north end's beloved Propeller Brewing Co. has been quietly concocting something special: a series of Lambics. The first, a traditional Framboise, launches this weekend.

Created through the ancient process of spontaneous fermentation, Lambic-style beer, as Propeller's director of sales and marketing Andrew Cooper describes, "involves nurturing things in your beer that you [normally] put all effort to avoid getting into your beer," namely, naturally occurring airborne yeast. The result is a complex sourness balanced through the addition of macerated fruit—in this case, raspberries—unmalted wheat and aged hops. Brewed with imported Lambic yeast, aged in oak wine barrels and bottle-conditioned for several months, by the time Propeller Framboise (4.2 percent) hits your tongue, it will be effervescent, musty and tart.

"It's definitely a chance to show people that we can step outside our comfort zone," explains Cooper, comparing this project to the brewery's one-hit wonder program: "A lot of what we're brewing over at Gottingen Street now is outside of what our core brands are, in the spectrum of beer styles. That's one of the reasons why we decided we would do this."

Propeller Framboise launches Saturday at Stillwell, with a very limited (200-bottle) release at both Halifax and Burnside brewery locations Monday, August 25. The second launches around Christmastime.

Cooper is pragmatic in his excitement. "We hope to do this forever, let's say. We may not. It's very labour intensive and we're quite confident there's not going to be any money made on the venture," he says, laughing. "But it just shows where the beer industry in Nova Scotia and in Canada is going—we're to a point where we can pull off any style and do it well."

Propeller’s on the level