“If you haven't woken up to the second wave, this is your wake-up call” 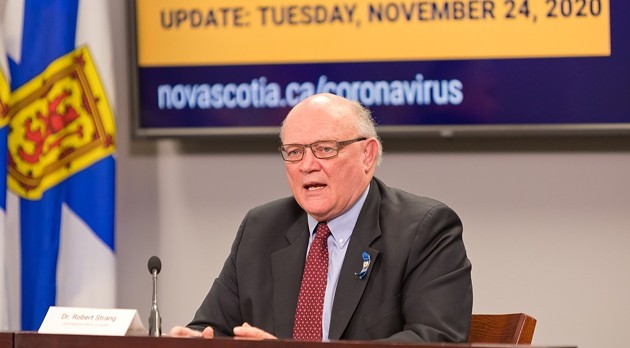 Update December 4: Today top doc Strang announced that the restrictions described below are going to be in effect until at least Wednesday, December 16. When initially announced, the restriction period was for two weeks, ending at midnight December 9, unless extended. By making a one-week extension now, rather than waiting a few days until closer to the initial deadline, Stang said he hopes to “give people more clarity and certainty,” He also reminded Nova Scotians that the goal of beating back the current C19 outbreak has a better change of happening “the more we buckle down and stay tight right now.”

As sequels often do, COVID-19 Second Wave is sticking pretty close to the plot of COVID-19 First Wave. Just like in the original, after a few days of rising case numbers and growing tensions in the community, yesterday the no-nonsense government officials—played by premier Stephen McNeil and Nova Scotia's chief medical officer of health Robert Strang, reprising their popular roles—announced strict lockdowns for Halifax, effecting countless masses. But there's a chance that we learned enough about the virus, and ourselves, in First Wave to beat it quickly this time around.

The province had 37 new cases of C19 Tuesday, all but two in Halifax. That's not just a major leap from 11 cases, which had been the the recent high, but is one of the highest daily totals Nova Scotia's ever had. Only four days in April, at the height of the first wave, were higher, with the peak of 55 cases on April 23. "If that isn't enough of a concern, I don't know what is," McNeil said at the start of the briefing. "If you haven't woken up to the second wave, this is your wake-up call."

During these past eight months in front of the camera in the government's downtown Halifax briefing room, Strang hasn't displayed a huge range of emotion. Gruff is his default setting, and it's not much of a stretch for him to get from there to grumpy or frustrated, depending on which basic anti-C19 steps people seem unwilling or unable to follow. Tuesday, however, he was borderline rousing, encouraging Nova Scotians to rise to the challenge of fighting the coronvirus better and faster than other places have done.

“I don’t want to scare people, but I want people to have a realistic picture of what we're facing.”

"We're doing this much sooner than other provinces," he said about the serious steps Nova Scotia is taking to disrupt community spread, at a relatively early stage of the second wave. "We're putting tight restrictions on now. Doing it now gives us the best opportunity to be able to lift the restrictions as early as possible. It also puts us into a better place to have earlier community and economic recovery. The longer we let things go on, the harder and longer it will be to recover from it. So that is why we're acting now."

The second wave arrived in Canada's six western provinces in September, and rose steadily. But even now, when it is triple the height of the first wave, responses are lazy. Yesterday, when Nova Scotia locked Halifax down, British Columbia only just clarified that its new mask-wearing rule indeed applies to "many indoor public spaces," and Alberta brought in measures to close schools but leave bars and restaurants open.

Atlantic Canada and the North were practically immune to the second wave until November. It officially arrived here last Tuesday, when unpredictable community transmission of the disease was confirmed. Strang and McNeil are aiming to accomplish the rare feat of nipping an outbreak in the bud, which is complicated by the disease's two-week incubation period: Even if the whole province went into complete shutdown today, the disease has made enough inroads that new cases will keep coming for two weeks, severely testing public patience and faith in the health measures at the time citizen buy-in is needed most.

Calling C19 a "stealth agent" at the briefing, Strang said "I just want to make sure people understand the context. And they're not surprised when we still see high cases in the weekend." He promised we will get more cases in HRM and outside HRM, probably in hospitals and nursing homes, too. "We know that's going to happen," he said. "I don't want to scare people, but I want people to have a realistic picture of what we're facing."

Abandoning all signs of gruff, Strang even got empathetic. "I know the situation is causing a lot of fear and anxiety for people. And I understand that. But we all have tools at our hand that can actually—by all doing it together—we have the ability to control this.

The bulk of the new restrictions and closures are specific to the Halifax Regional Municipality, where most of the second-wave cases are. However, the "stay close to home" message applies to the whole province, as part of the efforts designed to prevent the current outbreak from spreading both beyond Halifax and beyond the youngish age bracket of highly social patients it's primarily circulating in.

"This isn't easy, it's not easy," said Strang. "For me, I have a very hard last few days. This weighs on me heavily. We're back to where we were in March and April. It's hard for everybody, and we're feeling—feeling that. But just because it's hard doesn't make it impossible."

On Monday, restrictions on gatherings in HRM came into effect that were supposed to last until December 21. Tuesday's new, more wide-ranging restrictions are theoretically in place only two weeks, from just after the stroke of midnight this Thursday, November 26, through midnight Wednesday, December 9. But they may be extended depending on the progress we, and the virus, make.

Most of the new measures apply to an area the province is calling "western and central HRM," from Hubbards to peninsular Halifax, Dartmouth to Porters Lake, Bedford and Sackville to Mount Eniacke, out to Fall River and past the airport up to Enfield and Elmsdale. (The official listing is here with a lot of place names and an unhelpful map.)

The restrictions coming into effect on Thursday for Halifax, as announced by the province with some additional Coast commentary, are:

The restrictions coming into effect on Thursday for all of Nova Scotia are:

Things that are staying open in Halifax include barbers, hair salons, nail salons and estheticians, with Strang's proviso that "we're going back to exclude any procedures that involve the face and the client having to remove their mask." Hospitals and community based health-care providers are open. And crucially for so many people, schools, after-school programs and childcare are staying open.

"School-aged children are not where we're seeing the virus activity," said Strang. "Even the couple of school cases we've had, they have been exposed somewhere else. So the schools remain a safe environment."

“For everybody in HRM, now is the time to go to work, go to school, do your essential shopping and go home.”

One of the 37 cases announced Tuesday was at the Northeast Kings Education Centre, over an hour from Halifax in Canning in the province's Western health zone, and the school is closed for the rest of the week. Still, Strang doubled down. "Keeping schools open as long, as much as possible is critically important. Being at school is important for the mental, physical health and development and socialization of our young people," he said. "I emphasize that at this point in time our schools remain safe, and we are not going to be closing schools other than in reaction to certain cases."

To these reassuring words, Strang added a caveat: "If we have to change that, we will." An important reminder we're only in the first phase of the second wave, unable to do much except stay close to home and wait to find out how our story ends.