A new documentary highlights the history of Black hockey players in the Maritimes—and explores how it resonates in 2020. 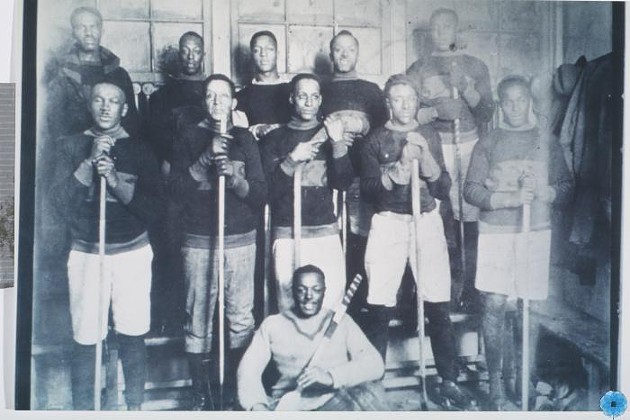 archival photo via novamuse.ca
A 1921 photograph of Coloured Hockey League team The Africville Sea-Sides—a rare piece of history of the longstanding legacy of Black hockey players in Canada.
[Editor's note, April 3, 2020: As of late March, the National Film Board has released Ice Breakers on its website—NFB.ca—for free streaming. Add it to your self-isolation watch list.]


When filmmaker Sandi Rankaduwa saw the National Film Board’s call for a short film program called Re-Imagining My Nova Scotia, she thought back to a book she’d read a couple weeks prior named Black Ice: The Lost History of the Colored Hockey League of the Maritimes, 1895-1925. Born in Sri Lanka and raised on PEI and in Nova Scotia, she’d never heard of the CHL, and was willing to bet few others were aware of the league’s story, too.

But once the NFB greenlit the idea, the subject posed a significant challenge: How does one explore the history of a hockey league in the medium of film when there’s precious little visual evidence of its existence?

Enter Josh Crooks, a young, Black, elite forward from Cole Harbour. When Rankaduwa was tipped off to Crooks’ existence by Lee Francis—another subject of the doc who serves as the vice president of the Black Ice Hockey and Sports Hall of Fame Society—she realized that focusing on a current player was the best way to investigate the league’s legacy. “I wanted it to be uplifting and seen as relevant,” Rankaduwa said over the phone from New York City in mid-February. “I think sometimes when we talk about history and recall things from the past, we don't necessarily emphasize what it means to the present and the future, and that's something we tried to do with the film—show that it's not just that this history is important to acknowledge, but that it has effects on the present and future of players of colour.”

“It's history,” Francis says about why it’s important to tell the league’s story. “We always read a lot of stuff, especially this time of year, about Black history. It's just one component of our history that has been hidden away. I mean, it's not a Black or white issue. It's an issue for everybody.”

Without giving away too much, the doc recognizes the CHL as the birthplace of at least a couple of hockey’s most exciting and lasting innovations: “They were very quick and aggressive, and it was a really entertaining game,” Rankaduwa said. “And I think that's part of why so many Canadians are watching it now.”

It also explores Francis’ experiences as a Black player, coach and parent, watching his son play hockey and touching on an incident that led his son to quit the game altogether.

There’s a scene where Josh and his father, John Crooks, visit the Nova Scotia Sport Hall of Fame and, after some searching, find a single photograph, obscured by a jersey, of the 1921 Africville Sea-Sides (a CHL team) in a temporary exhibit. That photo is no longer there, as the NSSHF’s new temporary exhibit in the same space is one featuring sports cartoons by the Chronicle Herald’s Bruce MacKinnon. The Museum and Communications Coordinator pointed to the museum’s online archive at Nova Muse, where the photo lives permanently. As of this month, there is no CHL presence in the NSSHF’s physical exhibits.

Over the phone on February 12, NSSHF CEO Bruce Rainnie explained that the majority of the Hall’s display space only features inductees who were chosen through a public nomination process that the public can access via the organization’s website. As of 2020, no one has nominated any team from the CHL—and so, there is no information about the league at the NSSHF. But, it's worth noting that no one nominated cartoonist Bruce MacKinnon, either. Rainnie explained in a follow-up email that temporary exhibits like MacKinnon’s don’t adhere to the same rules as permanent ones at the Hall. The concepts for temporary exhibits are decided on by the five staff members of the NSSHF, with Rainnie having the final word.

In the doc, father and son leave the NSSHF rather abruptly, upset and unaware of the Hall’s nomination process.

Rainnie says “every effort” is made to get the word out about the nomination process, including a yearly reminder in any area serviced by the Saltwire network of newspapers, social media messaging and appearances on local radio and TV. Nominations for 2020 are currently closed.

Ice Breakers was supposed to screen at Pier 21 as part of African Heritage Month this week. Over email, the NFB’s head of media relations, Magalie Boutin, said that event was postponed and that “the NFB is committed to re-scheduling the film as soon as possible.” When asked why the event was postponed, Boutin wrote: “The NFB is reviewing some concerns raised by the Nova Scotia Sports Hall of Fame. No decision has been taken at this time and we wont (sic) comment at the moment.”

Rankaduwa would like to see the film educate a wider audience about the history of the CHLM, with the hope that this reminder of its existence continues to help carve a path forward for players of colour. “I hope more people learn about this, and it shapes how they see hockey, and I hope more players of colour can feel inspired and encouraged by watching the film,” Rankaduwa said about the hopes she has for Ice Breakers. “I think this is sort of a moment of reckoning in hockey.”