I Hear You: a medical drama that listens

The web series tells the "quiet side of medicine, where gender-oppressed people are dying." 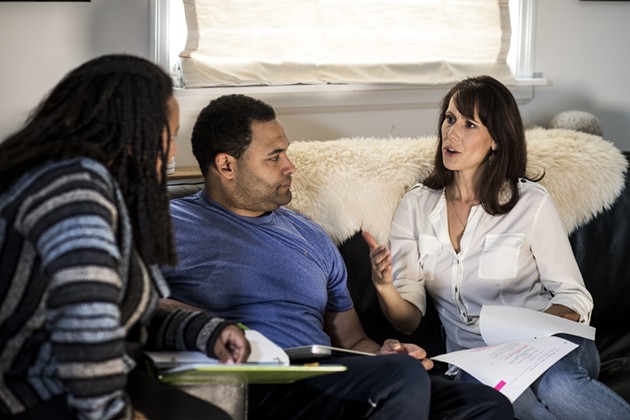 Submitted
Amy Trefry (right) sits with actor Jacob Sampson and actor/co-creator Koumbie on the set of I Hear You.
I Hear You
now streaming on ihearyouseries.com
free
The world doesn’t need another medical drama. If you’re looking for life-or-death plot lines and heroes (or hunks) in scrubs, you’ve been long-satiated thanks to Grey’s Anatomy, E.R and even the likes of The Mindy Project. Good thing, then, that the web series Halifax-based filmmakers Amy Trefry and Koumbie have created falls so far outside its genre, a new one is almost needed. I Hear You, a 10-part show now available online at ihearyouseries.com, is “a non-conforming, feminist medical drama,” explains Trefry. “It was driven more by a need for society to talk about this.”

The 10-minute (ish) episodes chronicle what Trefry calls “the quiet side of medicine, where gender-oppressed people are dying because they are not being heard or listened to and their pain is not being recognized—and the medical system doesn't have the tools, expertise or resources to help them.”  (Bad news if you were only in it for the gore—but good news for the rest of us, who like to watch human stories unfold like crumpled paper onscreen.)

Plots range from a woman’s panic attack during a pelvic exam to a trans woman’s first UTI to a non-binary person's decade-long attempt to get tubal ligation. Based on composites of true stories, Trefry says the series was borne out of "the personal connection to the idea [that] there is a massive gap and gender bias in the medical system—and there is this huge demographic of gender-oppressed folks, that includes women and non-binary people, who are not being heard in that medical community."

The takeaway? You're not the only one who's left the doctor's office feeling like they didn't hear a word you said—a truth that multiplies for anyone who's not a white, cisgender male. (As Trefry adds, "Who can do that with a 15-minute time slot?")

Simply put, Trefry says she and her co-creator “knew we weren’t alone, but we felt very alone and we felt very silenced.”

The system is sick, and it will take incremental changes to get better: “I’m very aware of stories on both sides of the gurney," Trefry adds. "That it is not just patients that are struggling to get help but there’s physicians struggling to help their patients as well.”

She explains how systemic issues springing from the white, hetero, cis-male-centred reality of medicine mean marginalized groups, trans people and non-men don’t receive adequate care in many ways. (For example: There is a procedure to follow after you get your tonsils out that's common knowledge—you know to eat ice cream—but the post-op care for things like miscarriages aren't as step-by-step, leaving some patients in the lurch if their doctors aren't thoughtful.)

“The medical system is still made by men for men; research is done on men, drug companies are run by men; drugs are made for men. I mean, I feel like that maybe subversive level isn't recognized by people—but the audience that we’re targeting right now, they’re super aware of it,” Trefry—who is also the show’s writer, producer and star—continues: “I feel like our show, we’re preaching to the choir because right now the group who already knows this are the people who need their voice to be heard and my hope is if I reflect in the show at them, they feel like it’s ok; that they see themselves and identify themselves in that and that’s one of the first steps to feeling seen and heard and then advocating for yourself further.”

Playing the role of Dr. Alyssa Hart—a character Trefry says “fails over and over and over again but is constantly trying”—means Trefry is also sharing screen time with some of the Halifax acting world’s big names, like Stephanie MacDonald (who plays a single-by-choice mom struggling with postpartum depression) and Jacob Sampson (who plays the significant other of Dr. Hart).


Having a diverse cast helped the show stay true to its source material, too, Trefry says: “This is a show for women, about women, written and created by women—the actual lens, the actual eye of the show, needed to be a woman. And when I say ‘women’, I mean it in the most inclusive way possible."

Aside from empowering its target audience, Trefry hopes I Hear You will raise the temperature enough to make the medical community treat its own fever: “We’re just asking for physicians to try.”