Hundreds of Nova Scotian students walk out in support of teachers 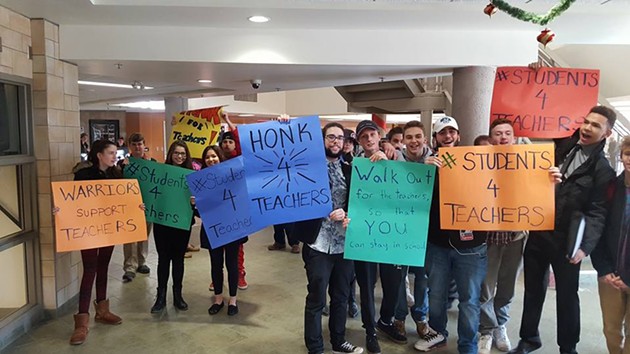 Students across Nova Scotia are walking the walk.

On Friday, students from about 25 schools—including Dartmouth High School, Halifax West High School and Citadel High School—participated in a walk-out in support of their teachers' labour battle against the Department of Education.

According to a release from the Students for Teachers Facebook group, the goal of the protest is to send "a strong message to the government that we do not support them, and we are fighting alongside our teachers for our education."

Hundreds of students in downtown Halifax made their way to Province House for the protest. Other rallying students elsewhere in the province were encouraged to protest outside their MLA’s office if it was nearby.

The Nova Scotia Teachers Union (NSTU) voted overwhelmingly in favour of a strike on October 25. On November 21, talks between NSTU and the provincial government broke down, with premier Stephen McNeil saying the province couldn’t afford to meet the union’s proposal.

Starting Monday, December 5 teachers will only perform the mandated duties of their expired collective agreement under a work-to-rule job action.

The number of #students4teachers posts on social media is really incredible. It's great to see so much engagement across NS. #nspoli