The nearly-$10,000 project was directed by the CAO and the mayor, not the Black activists who first proposed the idea. Victoria Walton
Black Lives Matter was painted along Brunswick Street overnight on September 26, missing the entrance to Halifax Regional Police headquarters by merely a kilometre.
Aaliyah Paris woke up on Monday morning blindsided by the news that Halifax and Dartmouth were home to two new Black Lives Matter street murals.

It's not that Paris doesn’t support the movement, she does. So much so that back in June she actually came up with her own idea to paint an “All Black Lives Matter” mural (the “all” meant to include LGBTQ2s+ and non-neurotypical Black people who often feel excluded from the BLM movement).

“I had no idea that this was going to be happening now,” she tells The Coast. “As far as I knew it was just like something they were talking about loosely, they didn’t have concrete plans. And then fast forward to earlier this week and then I just see it done.”

After learning about the murals, Paris posted a video on her Instagram and later shared it to Facebook as well, saying the felt like she’d been slighted. “I spent months of my own time doing all of this work,” she says in the video.

Her original plan was to find a city street, gather a group of artists, and to foster an inclusive sense of community through the project.

“I wanted the mural to be a community-based thing with BIPOC community members helping out, not city workers doing a street installation," she says in the video. "It’s more than that."

But after raising over $2,000, the project was put on hold before it could even begin after the group consulted a lawyer about what would happen if they actually did it.

“We could receive multiple different charges, and most likely since we’re all racialized people, if they combine and or stack those charges we could each individually face 20 years for that,” says Paris, who is Afro-Nova Scotian and Congolese.

On that advice, the group paused the project until it could be given official approval. 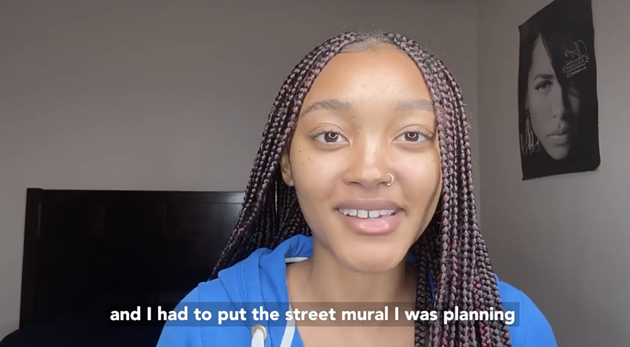 Facebook
A screenshot from Paris' video where she accuses the mayor of stealing and corporatizing her idea.
Then the mayor’s office took the idea and ran with it. HRM spokesperson Erin DiCarlo says there were discussions about similar initiatives between community members and the municipality’s office of Diversity & Inclusion as well as the African Nova Scotian Affairs Integration Office, “however, community engagement specific to this installation was not undertaken.”

For a total price of $9,125.03 including HST, Gramac Ltd., a construction company based in Lower Sackville, painted the murals overnight Saturday on Alderney Drive in Dartmouth and Sunday on Brunswick Street in Halifax.

When The Coast told Paris the price, she was shocked. “That is a lot of money. Oh, like, wow. That makes it that much worse. They just completely outsourced; they didn’t even stick within the community. That is a lot of money from them that could’ve gone elsewhere,” she says. “Just wow.”

And while municipal staff didn’t consult the public, they did consult among themselves.

“This art installation was directed by the CAO with the mayor’s endorsement,” says DiCarlo. “The planning process, including liaising with the municipality’s office of Diversity & Inclusion as well as ANSAIO, choosing locations, and hiring a contractor took a number of weeks to complete.”

Paris says she likely wouldn’t have been involved in the project because she feels it was too performative.

But she hasn’t given up hope there’s a way forward that can still be inclusive of the community.

“As it stands I’m open to having a conversation, but that doesn’t necessarily mean I’ll work with [the mayor’s office] directly as I prefer staying in the community and in spaces where community members feel heard and safe,” Paris says.

Paris says the project may grow into something different than she originally planned, but she’s certain it will still become something for the community.

“The money is still there and we are still brainstorming right now in terms of what our next move is going to be,” she says. “But we’re definitely not just going to let it not happen.”