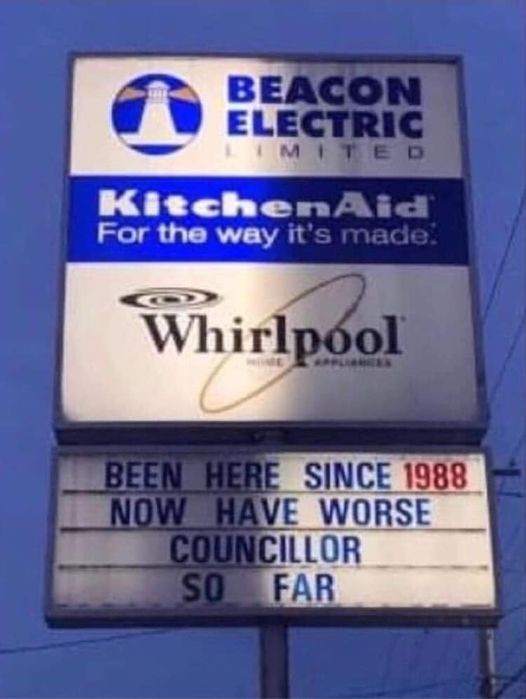 A brief explanation of advisory committee roles and libel laws.

The letterboard underneath Beacon Electric and Whirlpool Corporation’s company signs on Hammonds Plains Road used to read: “Been here since 1988 now have the worse councillor so far.” Until last week.

On Dec. 29, Halifax city councillor Pam Lovelace posted to Facebook that she had taken legal action against Beacon Electric and Whirlpool for libel because of that sign.

In her Facebook post, Lovelace says the sign is about a specific case, and that the problems started after a community council meeting on June 14, 2021. But the issues started seven months earlier, in November 2020. So, come along on a journey into the magical world of bureaucracy and libel law to find out if Lovelace is, in fact, the “worse” councillor since 1988.

On Nov. 4, 2020, Tier Too Properties pitched a doggy daycare idea off Hammonds Plains Road—near Beacon Electric’s building—to the North West Planning Advisory Committee. An indoor dog kennel was allowed by the land zoning, but an outdoor dog run would require a development agreement. All development agreements have to go through the regional design and/or planning advisory committees. And as the name suggests, advisory committees do not have legislative power in the HRM, but their suggestions are heard and often accepted by the committees with legislative power.

In that Nov. 4 meeting, the community council, which included councillors Tim Outhit and Lisa Blackburn, voted to reject the outdoor dog run because the closest neighbouring house, 75 feet away, would have been unduly affected by the noise. The only person to vote for the dog run at the time was then advisory board member Chris Bewsher. And it seems like he voted for it because the affected neighbour didn’t show up to the meeting to say it was an issue.

The advisory committee also voted against the development agreement because of issues it could cause with bylaw enforcement. The committee members were worried Halifax bylaw officers could have trouble trying to enforce bylaws on a site council had specifically approved for the noise it makes.

Because the advisory board rejected the proposal, Tier Too Properties rejigged its design to make it more likely to pass through the subsequent community council meeting and then get moved on to council. In this rejigging, the developer moved the dog run away from the neighbouring house and instead put it right behind Beacon Electric.

This new proposal is what was discussed in a June 2021 community council meeting. In that meeting, Reggie Stallard Jr. of Beacon Electric told the committee that the developer didn’t do proper noise mitigation, and instead just made the dog run larger and put it right against the Beacon Electric building. Stallard said city staff labelled his business as a warehouse, but it’s not. He told the committee it was a retail store, with a conference room in the back right beside the new dog run. He told the committee the loud dogs were going to wreak havoc on his business because the planned noise mitigation for the new location was not enough.

At the meeting, councillor Lovelace asked Stellard if he would be happy with a six-foot fence. Stellard said no because the Jollytails dog daycare in Burnside had far more than a fence, and its more substantial noise mitigation still did very little to muffle loud barking.

Another speaker at the meeting, Charlene Muldoon, said she was worried about rats and the smell that comes with dogs going to the bathroom on artificial turf. Lovelace asked if Muldoon looked up the zoning of her house before buying, and Muldoon told Lovelace that she rents. Lovelace then asked if Muldoon would be happy with a larger fence, and Muldoon said, “Well, if it does get approved, something's gonna have to be done.”

And so, with two of Lovelace’s constituents telling her they didn’t want this development, Lovelace voted in favour of it, even though she could have voted against it, and it would have still passed with a vote of 4-1.

This is likely why Beacon Electric put that sign up. Given the opportunity to symbolically vote with her constituents who engaged in the public participation process, she instead voted against them.

Then in December 2022, Lovelace posted on Facebook celebrating the sign’s removal, writing in part: “In Nova Scotia, Defamation is not ‘opinion’, it’s illegal. A published opinion of someone is ‘Fair Comment’ under law but must be proven as accurate, otherwise it’s libel.” 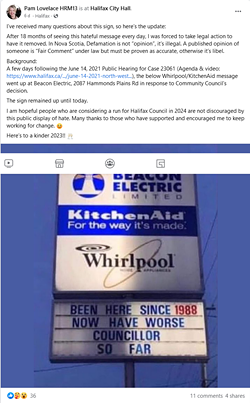 Pam Lovelace HRM13 Facebook page
The post Pam Lovelace made after her cease-and-desist letter was acted upon by Whirlpool.

Which fundamentally misconstrues libel law. Opinions don’t need to be proven; people just need a reasonable justification to hold their opinion. Lovelace voting to put a pack of braying dogs permanently outside of a business conference room would absolutely justify the opinion of that business owner that Lovelace is the “worse” councillor they’ve had since 1988.

As far as defamation is concerned, this sign is not that either. It’s very clearly an opinion voiced by a constituent who was unhappy their councillor didn’t stick up for them in a public meeting. And voicing that opinion, or the right to do so, should be protected.

According to one of The Coast’s libel lawyers, Nancy Rubin of Stewart McKelvey, “the law protects opinions on matters of public interest, based on the facts. Comments don’t have to be fair or nice. The crank and the enthusiast are equally protected in the interest of public debate.”

Criticizing a councillor for a public decision she made is an opinion. And because the criticism is about a specific decision made by Lovelace in a public meeting about her response to public participation in her role as a public servant, it is absolutely a matter of public interest.

On Facebook, Lovelace said she had taken legal action and confirmed to The Coast via email that she sent a cease-and-desist, which in turn made Beacon Electric and Whirlpool take down the sign. Although it should be noted that sending a cease-and-desist letter is a choice and not something that is legally mandated, Lovelace was not “forced” to do this, as per her Facebook post.

In 2001, the province of Nova Scotia briefly considered passing anti-SLAPP legislation put forward by then MLA Graham Steele. SLAPPs, or strategic litigation against public participation, are frivolous lawsuits that have no chance of standing up in a court of law. SLAPPs are generally used by people or corporations with power and money to bully less powerful people and businesses into doing what they want in hopes that the smaller entity doesn’t have the time, resources or desire to fight the SLAPP. If the anti-SLAPP legislation had passed as written in 2001, Lovelace would have had to eat a large legal bill for her use of a SLAPP against a business in her district. But since that legislation did not pass, councillors are free to SLAPP their constituents for signs they don’t like.

And for what it’s worth—in this journalist’s opinion—the worst councillors right now are Lindell Smith, Becky Kent and Lisa Blackburn, because they all sit on the Board of Police Commissioners but aren't using the power of their positions to prevent the Halifax Regional Police from low key violating our Charter rights.