By Stephanie Johns and Adria Young 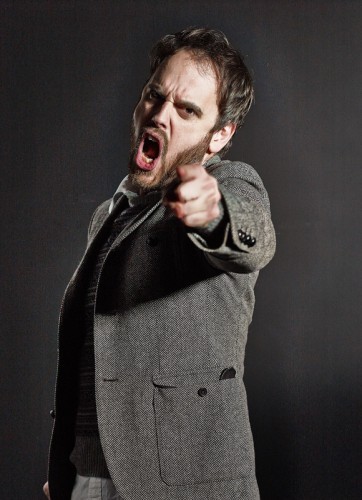 Andy Bush doing some of that yelling he loves so much.

I love watching Andy Bush yell. And he yells a lot as the host of Good Morning Tonight, a live talk-show produced by HPX comedy whiz Stephan MacLeod, which features Andy’s “dad” Rollie Bush (Mark Little) desperately trying to derail all of Andy’s attempts at even marginal success. Joined onstage by “Positive” Geordie Miller and live-text correspondent Paul Doucette, Andy underwent a series of Wile E. Coyote-like obstacles. Andy got mad when: Rollie botched his entrance sketch; when “hipster gypsy” Bill Wood read Andy’s tarot and exposed his inability to love; when Struan Sutherland was so funny (and I mean HBO-special-funny) I don’t think Andy even got his jokes; when the band (Joel Waddell, Matt Reid and Nathan Pilon) offered weak drumrolls for Andy’s “punchlines;” or all the times Rollie interrupted Andy, which was every time. I think Andy needs anger management.

Anyway, after the intermission, the audience was treated to a reading from Geordie’s junior high-school journal about the time he went to see The Counting Crows. And then Andy interviewed two roadies (Cheryl Hann and Everardo Ramirez) who broke into a musical number about selling their souls to the Devil. Like Andy, Cheryl is great at yelling and it was extra funny that the only woman on the show played a dude. There were lots of nonsensical contributions from the couch, including Rollie making fun of Paul’s dyslexia because Paul types “Gerdio” instead of “Geordie” in emails. Paul said it was his little secret that he can’t spell. “No, I’ve noticed,” said Geordie. Rollie said Gerdio would be a great name for a racehorse.   The definite highlight was when Rollie pitched his new Cows Ice Cream shirts. Rollie is a businessman, BTW, and always has new products and pitches lined up. So last night he broke down the science of Cows marketing: “Take something popular, and then put a cow in it.” He unveiled his new line of Cows t-shirts, including “I’m in the Moooo’d for anal” and he’s really onto something there. Then Andy brought out the final special guest, Rich Aucoin, which Andy kept pronouncing with a French accent for some reason and they talked about Subway sandwiches. Then Rich performed “Yelling in Sleep” from his record Ephemeral (the release is tonight!) and that was really cool; I love Rich. Then Rollie sang the entire Subway menu and Andy kept getting mad that no one was leaving. It was a really great show. —Adria Young Calgary's Telstar Drugs is one of my favourite bands in Canada right now. Its bandcamp page is a treasure trove of hypnotizing experimental rock, heavy on the krautrock influence and mind-blowing drumming. The Carleton was packed to the rafters, and though momentarily slowed by a buzzing amp and an unruly guitar strap, Telstar Drugs wound its way through a set showcasing a charming blend of expectant lulls and meteoric peaks. The vibe was strong, and I've never heard someone call a CD a 5" before and that was funny. Also, it'll never get old to see that volume of people out on a rainy Wednesday night. I wish that was every night.