How to get a great tattoo, part 2 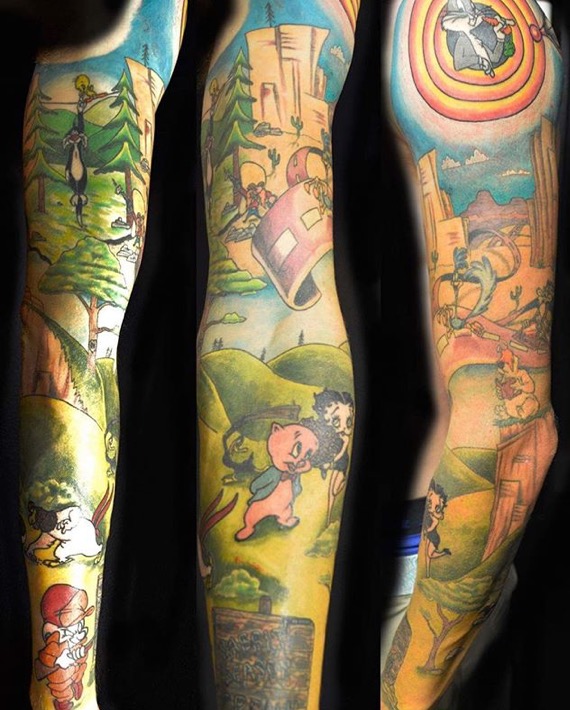 Courtesy of Deuce Tattoos
This client went full Looney
With colleague Carmin A, tattoo artist Bronwin Ironside from Deuce Tattoos in Bancroft, Ontario, is one of over 70 artists who'll be at this weekend's 10th anniversary edition of the Maritime Tattoo Festival. With 11 years of experience as a tattoo designer and artist around Ontario, she explains the elements of one client's scenic and colourful Looney Tunes sleeve.

When did you work on this design?
I started this sleeve in around 2010, while working at Mike’s Tattoo in Peterborough, Ontario. My client moved across the country so we picked away at it over the course of the next few years.

What's the story behind it?
When Marshall was little, his mother worked two jobs and in the mornings, he would watch cartoons and take care of himself. Thus, giving him a pretty big connection with and affection for Looney Tunes. He came in with the basic idea of the characters he wanted to include (that list was long, by the by), and he left it up to me to figure out how to make it make sense. I ended up free-hand drawing all of the landscape on him, and using stencils for the individual characters.

How long did this full sleeve take?
This took a few full-day sittings. Longer than usual because in the middle, I went on mat leave.

How often do people bring in their own designs?
People frequently bring in reference pieces to visually explain the direction they’d like you to take, to give them the artwork and tattoo they want. It’s up to me to deliver the client with what would work best for the both the client, and myself. It’s one thing to use a specific font that someone has really fallen in love with, but it’s a horse of a different colour when someone comes in and wants you to recreate an entire sleeve or back piece that’s on someone else’s body. I always try my best to steer people away from that, because everyone deserves to have something unique. I can always use the same general idea, but create different artwork. References are great for inspiration.

Have you ever refused a client's tattoo idea?
The only tattoos I will refuse to do are things that spread hate of any nature (racist, homophobic, etc.). I prefer to and would rather spread love. I also wouldn’t do something that is just a plain bad idea. I’m not going to tattoo someones' eyeball, for example. In terms of refusing to do something I deem too strange, art is subjective. Just because I don’t personally have the desire for a specific image on my body that I think is a little bizarre shouldn’t negate someone else’s love for it. I don’t particularly want a centipede tattoo, but I love that the gal I tattooed one on was over the moon after wanting it done for 30 years. That’s part of the beauty of tattooing, you have the ability to give someone something they’ve felt like they’ve been missing, and make them feel a little more whole.

Our Artists Matter is a rallying call, not a reminder