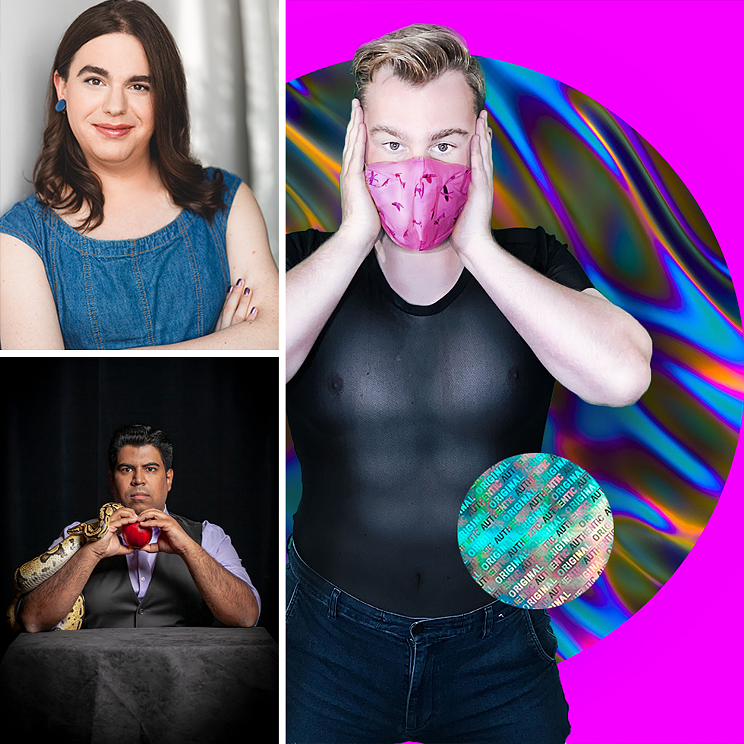 From sketch comedy to period thrillers to shows about the awkwardness awaiting at friend reunions, our favourite Fringe picks pack a punch.

How to binge on Fringe

A list of plays to see at the annual theatre festival, from Sep 2-12

It's been a hard run for the Halifax Fringe Festival: Last year's event marched on in the face of an unprecedented time by pivoting to online and re-imagining the very foundations of the form. The year before that was just as formidable, though, with a hurricane hitting town the weekend of the fest—effectively cancelling dozens of shows. But now, in 2021, it feels like things might finally be going Fringe's way: The province's reopening plan means we can see a show IRL again, and The Bus Stop Theatre—long a nucleus of the unjuried theatre celebration—is putting renovations on hold to host a swath of performances as the fest takes place around town from Sep 2-12.

A smaller, all-local slate of offerings at the event is the perfect treat to transition into fall with. And while every single Fringe show promises unexpected adventure and creativity as always, here are six pieces in particular that we're making sure to snap up tickets for:

Mind The Light
Halifax singer-songwriter stalwart Gabrielle Papillon's Fringe debut has been years in the making, snug in the seed of a song (2012's "Go Into The Night"), rooting in old family lore (the piece is based on Papillon's imagining of her great-grandmother's coulda-been life as a lighthouse keeper) and budding thanks to her lifelong love of musical theatre.

But it wasn't until Papillon connected with local actor Avery Jean Brennan that things began to really blossom, with the two "walking around the Public Gardens for like, three hours," as Papillon puts it, one March day before green-lighting the project. For the final result, Papillon has music, lyric and concept credits for the show while Brennan is the brains behind a book accompaniment. Set in the 1880s, the story picks up where family history—of a lighthouse keeper dying in a storm enroute to the mainland for a midwife to assist his wife's early labour—left off: What if Papillon's great-grandmother (the baby in question) had stayed and operated the lighthouse as an adult? And what if its isolation was the perfect cover for her to build the sort of queer, atypical family the time period wouldn't allow?

"I don't think my great grandmother was queer, but I'm queer," Papillon starts, saying she feels tired of tropes where the queer characters either don't exist or die tragically, "or their whole purpose of the show is about their queerness." In Mind The Light, she says, there's "this bubble where on the island, in that family, everybody can be who they are—and it's largely because the matriarch of the family chooses to stay and to maintain her autonomy...to stay on the island and sort of create this little safe haven."

VomBoss
Endometriosis is a condition where menstruation-like tissue grows outside of the uterus, breaking down and bleeding like a displaced period. It's very painful, and since the blood has no exit point, can cause a host of problems, from organ scarring to fertility issues. But google it, and the first suggested question to pop up is: "How serious is endometriosis?"

Without meaning to, the search engine has just told you the first thing you really need to know about the condition, which affects 10 percent of the menstruating population globally: The only thing you'll do more than grimace in pain is prove that the pain exists.

This grimacing, this proving, is where Sarah Smith's play VomBoss begins. The actor- director based the play on her own experience (she's had endometriosis since 2016), which included "a period where I was vomiting almost daily for quite a long time. And I don't know if it's because I'm an actor or because women are just expected to act like this in society, but I would just keep going about my life as if nothing was wrong," she says. "Just the expectation that even though you're in constant excruciating pain and you're going through all these horrifying symptoms, you just keep going. That's the norm: I always vomit like a boss—it's like a Girlboss," she says, a deadpan delivery explanation of the play's title. Billed as a "darkly comedic thriller," (the doctor who doesn't take a young woman seriously is the show's villain) the play jackknifes between scenes based in reality and "absolutely unhinged, strange skits."

Dangerous Lies
Tabraze Sheikh's suspenseful true story traces how it feels to grow up Muslim in a post-9/11 world. Clocking in with an hour's runtime, Sheikh describes the play as a meditation on hope, loss and identity.

Gay Garbage
Award-winning comic Tom Hearn got the inspiration for his Fringe comedy show from the most unlikely of places: "In 2019 a woman came up to me and a fellow sketch comedian," Hearn tells us in an email. "She said that she loved when he was on stage—because he didn't do that 'Gay Garbage.' So I got to work, creating a solo sketch show which celebrates MY queerness."

My First Heart Attack
Fringe vet and Coast alumni Jane Kansas has always known how to weave a taught, perfect world from expertly plucked words. Her third festival show recounts her recent, 170-day stay in Dartmouth General and the QEII following her heart attack, recounted with the ususal Kanas humor.

Lakeview: a live read
Tara Thorne (another Coast alumni) and Nciole Steeves, the director-producer team behind the upcoming Telefilm Talent to Watch film Compulsus, arrive at Fringe with an early draft of a movie they say "doesn't technically exist, as performed by some of your local faves, who definitely do." Billed as a queer ensemble comedy, the show follows a group of pals reuniting at a lake house weekend.