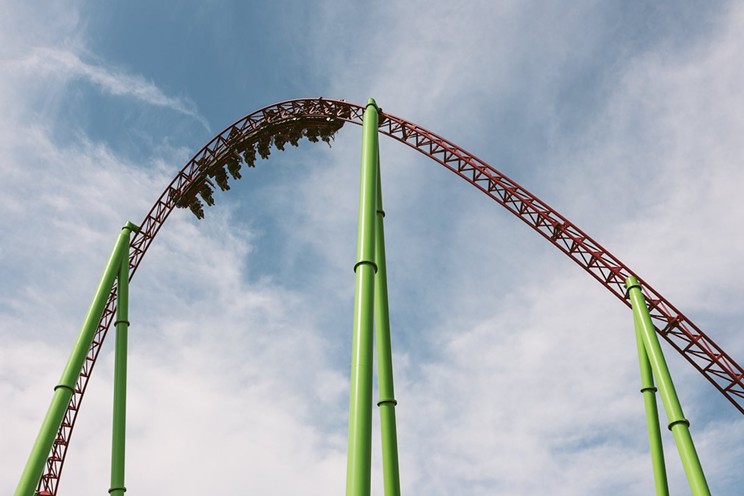 Stock photo
With any luck the coronavirus counts will go down as quickly as they went up.

Updated: All of the province’s pandemic statistics were going up, but Doctor Strang says the outlook is "low and slow and stable."

Update December 8: The new provincial COVID numbers came out today, and cases, hospitalizations and deaths are all back down. To find out more about the threat of a winter surge, we got on the phone with Dr. Robert Strang, who thinks Nova Scotia is in a good place right now with the disease. “What we're seeing is low and slow and stable,” says Nova Scotia's chief medical officer of health, “continuing to slowly trend over time downwards.” Strang says that assessment comes from looking not just at the weekly testing numbers, but from considering other factors including the risks posed by new variants and measurements of COVID in waste water.

Nova Scotia’s COVID stats had been moving in the right direction since October. The numbers of new cases and pandemic patients admitted to hospital kept dropping week after week. Even deaths, which have been stubbornly persistent, joined the trend, dropping from the recent high of 17 deaths reported in the Oct. 20 weekly numbers to 10 in the Nov. 24 report.

But on Dec. 1, in the latest numbers, everything went up. Is that just a blip in the data, or the start of the threatened winter COVID surge? That’s the question of the month, and we’ll answer it as much as we can with the information the province provides.

New infections rose from 515 reported Nov. 24 to 544 reported last Thursday, Dec. 1. That works out to a rise of just 5.6% from one week to the next, and 544 cases is still less than half of the new infections reported Oct. 20. (See the graph below.) That’s the good news. The bad news is that any increase after five straight weeks of declines raises a flag. And the worse news is those numbers aren’t very trustworthy.

Getting tested regularly used to be something we did as basic pandi prevention. “Let's continue to make proactive testing a top priority,” then-premier Iain Rankin said in February 2021. “No matter whether you live in Halifax or elsewhere in the province, I encourage you, even if you don't have symptoms, to book an appointment at one of the primary assessment centres or drop into a pop-up testing site."

Today in Nova Scotia it’s hard to get a PCR test. Except for people who are having medical procedures and therefore get tested automatically, anybody else has to have COVID symptoms before they can think about getting PCR tested. And symptoms on their own aren’t enough; a symptomatic person has to have at least one extra factor off the province’s screening list. For example, First Nations people, those who work in front line health care, persons aged 50+ or individuals living in nursing homes are eligible for PCR testing if they show symptoms. But hundreds of thousands of otherwise healthy Nova Scotians simply can’t find out if they have COVID unless their symptoms land them in hospital.

Nova Scotian COVID in 2022: Deaths, cases and hospitalizations: Infographics of new infections, disease fatalities and COVID-19 patients in hospital from the pandemic’s first wave in 2020 to omicron in 2022.

A positive rapid test doesn’t count as a reason to get the more conclusive PCR test, by the way. So the current anecdotal boom of sick people self-identifying with COVID after a rapid test isn’t showing up anywhere in Nova Scotia’s official numbers. Instead, that statistic of new cases is designed to undercount reality and can’t be trusted to inform us of the current disease situation. (Test positivity, a measure of how big the pool of people getting tested is, would provide useful context to the new cases number; the province doesn’t currently report it, which will be the subject of a future story.)

Death stats are vital but lagging

The number of COVID-caused deaths is a vital count of the coronavirus’s worst effect. But it’s most useful as a measure of pain, suffering and how completely the province has abandoned disease countermeasures (think mandatory masking, border controls, travel restrictions, quarantining, proactive testing). It isn’t very good at giving a timely sense of disease spread.

Any deaths come days or weeks after infection. To acknowledge this, the province recently changed the way it reports fatalities on its COVID data dashboard, dividing out deaths that are known to have occurred in the last seven-day reporting period from deaths where the person died earlier, but was only confirmed to be a COVID death in the latest reporting period.

The Dec. 1 report is typical of how the numbers work out: There were a total of 15 COVID deaths announced, 14 of them being people who died some time before the Nov. 22-28 reporting period, and only one person who died during the period *and* that death was confirmed as a COVID death in the same period.

While it’s always good for the province to be more clear and explicit about the data it gives, for our purposes the two classes of deaths are a distinction without a difference. The Coast uses the total number of new deaths reported each Thursday at the data dashboard, as in the graph above, without getting into the finer timing details. Most recently, there were 10 deaths reported Nov. 24, and 15 reported Dec. 1. That’s a 50% rise in deaths from one week to the next, but even that massive increase—related to people who got infected earlier in November, when provincial COVID numbers were dropping—doesn’t give us any information about a looming December surge.

Checking in on hospital admissions

Which brings us to hospitalizations, defined by the province (under Data Notes and Sources) as the number of “people who have been admitted to…hospital due to COVID-19” during the weekly reporting period. It’s not usually lagging some days or weeks behind the reporting period, like the death count. And since the province hasn’t (yet) told people with the deadly disease to stay away from hospital if they develop extreme symptoms, it’s not being deliberately suppressed like the count of new cases.

In other words, hospitalization are our best measure of COVID’s virulence week to week. And here the numbers show a distinct turn.

Throughout 2022, hospitalizations have been going up and down, as the above graph shows. These rises and drops can be volatile—one week the number is down, next week it’s up, down, up. But across the year there have been several periods when admissions steadily dropped for several consecutive weeks, such as from the Jan. 27 report to March 3, or July 28 to Aug. 25.

The very longest downward streak was six weeks in a row, Oct. 13 to Nov. 24, when the number of weekly hospital admissions fell from 55 patients to 31. That streak ended with last week’s report, when the province announced 43 admissions in the Dec. 1 numbers, a 38.7% jump.

Is it time to worry?

The count of new cases is a deliberately low measure of COVID activity in Nova Scotia. That’s a systemic failing, although in fairness both the Nov. 24 and Dec. 1 reports suffer from it equally, so we can compare apples to apples. (Rotten apples to rotten apples, maybe.) Those reports show a small but real increase in COVID activity, after weeks of decline; that's probably a small but real surge concern.

More significantly, the hospitalization number, our clearest picture of disease reality, is suddenly up almost 40% after a long decline. This could be the start of the winter COVID surge being predicted in media.

But it's only one data point, a lone dot, and it can’t tell much of a story on its own. If the province was still giving daily reports with briefings from chief medical officer of health Dr. Robert Strang, we’d already know what’s happening. As it is, we’ll have to wait until the new set of statistics comes out tomorrow for the next clue.