How Halifax treats unhoused people brings shame to us all | Opinion | Halifax, Nova Scotia | THE COAST

The Coast
The path to the Barrington Street green space site is blocked by a fence.

Get more stories like this delivered to your inbox by signing up for The Coast Daily newsletter.
Author's note: Since this story ran, I've received feedback about the accuracy of my reporting. There is a porta potty at the Geary Street site; I've been told it was there when I was there a week ago. I did not see it then but I have since found it. Unfortunately as is the way of the internet, this correction likely will not be seen by as many people who read the first piece. I know this. So I know this correction is not quite enough; I will have to work harder in future reporting to truly amend this mistake.


It’s hard not to be cynical about the way of the world as a journalist, especially one with military training. In the military, there’s a saying: trust but verify. The military’s trade is violence, so we trust each other, but also want to know for ourselves that the things we need in moments of life or death will work as intended. It’s a trait that also makes a good reporter. When the city’s politicians, police and staff tell us they won’t move anyone who doesn’t have a place to go, I trust them.

But I also verify. Which is why, on a sunny Friday morning, I went to the four campsites the city is offering to the unhoused. I wanted to know that if the police do evict people from Meagher Park on July 17 as planned, there will be somewhere for those people to go. 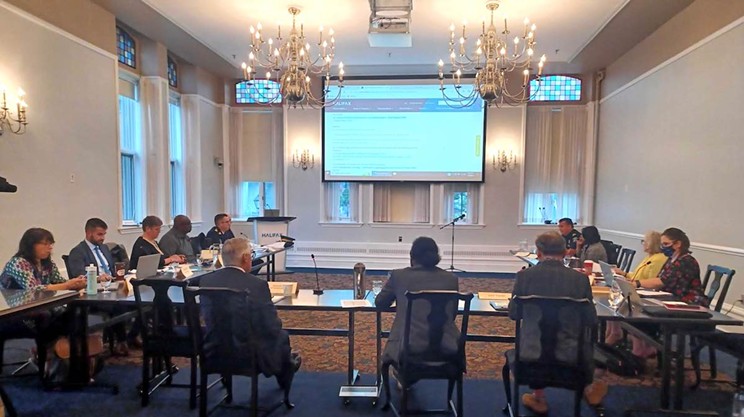 Police board tries to get ready for next week’s evictions from People’s Park: But top city staffer Jacques Dubé, architect of the disastrous shelter siege eviction last August, tells the board he and police chief Kinsella will handle it themselves.​​

City council opens some parks for unhoused Haligonians to sleep in: Public officials allow four pieces of public land to be used by houseless members of the public.

The good news is that there is room in some of the sites.

The bad news is this plan seems to have been developed without taking into account that unhoused people are human beings with agency who deserve empathy, respect and dignity.

This issue is fraught and filled with nuance. The city chose the sites it did in part because it is where people are already sleeping. My grievances with this scheme might be non-issues for some, and there may be issues that are more serious to others that I miss, but what is quite clear is that this policy seems to have been put in place with one objective: Provide the bare minimum in places that won’t make middle-class busybodies write angry emails.

Is there any other reason that the only green space provided in a densely populated subdivision also happens to be next to the low-income public housing on Green Road Park?

The Geary Street green space has no portable toilet. When asked about it, a city spokesperson wrote in an email: “Municipal staff have procured and installed portable toilets and garbage cans for organized garbage collection at the designated outdoor sheltering locations in municipal parks.” I have verified. I no longer trust.

John, a man who sleeps sometimes at the Geary Street site, told me the closest Porta Potty is in the Dartmouth Commons at the Ovens and that it is “fucking disgusting.” It is, and it is.

John (who asked The Coast to change his name to better protect him from the stigma of not having a home) took some time to talk about his situation. He’s been sleeping outside for a while. He had steady employment, but he got COVID and couldn’t go in for a few weeks due to internal pandemic policies at work. His trade is in high demand by Halifax Harbour Bridges, but he can’t work there because he smokes weed and can’t pass the required piss test—even though pot is legal. It’s worth noting that in order to be in charge of a Canadian warship or submarine at sea you need to have not smoked weed for 24 hours, no piss test. Should people doing bridge maintenance have higher drug safety standards than people driving billion-dollar warships chock full of weapons? Nope, it’s just another way we make being poor harder than it needs to be.

While he was out sick, someone stole one of his work boots. He can’t afford new boots, and he can’t go on job sites without safety boots.

John had to leave to go meet his girlfriend and try to get a phone. I had to go to the Barrington Street green space.

HRM staff presentation
The map to the four campsites the city is offering to unhoused Haligonians.

It’s not quite clear where the Barrington green space is. On the city’s map of the four approved sites, it looks like it’s between Barrington and the dockyard’s parking lot. On the Barrington bike lanes, there’s a Porta Potty and a little goat trail behind a fence. Is this the entrance? If people have questions about the city, their councillors tell them to call 311, so maybe they know? “Hmmm… I don’t know,” says the person who answered 311. She gave vague directions to where I was currently standing. “Is it accessible? Good question, I don’t know,” she says. It’s not.

Not only is it not accessible to people with mobility issues, but the only entrances are also goat-trail-like walking paths. On the other side of the Barrington green space is a cliff that drops five to 10 metres into the dockyard parking lot. If the city is sanctioning this site and someone falls off the cliff into the parking lot and hurts themselves, which has happened before, is the city now liable? If something goes wrong, how easily will emergency services be able to get there? Is anyone in the city thinking about what happens in an emergency for these people? Or should we read between the lines and conclude that the city just does not care if these people live or die?

Filled with impotent frustration, I head to Flinn Park. The site the city has approved for sleeping in is supposed to be lower Flinn Park, a piece of grass between some train tracks and Quinpool Road. However, the portable toilet provided for unhoused people is in the park part of Flinn Park. Right next to a couple of children’s playgrounds.

This is not necessarily bad, but it’s setting everyone up for failure.

People in this city go out of their way to antagonize the unhoused. Police chief Dan Kinsella has clarified at the past two Board of Police Commissioners meetings that if the police get a call, they do have to respond. He also told the board that the police don’t have a policy in place to guide them in interactions with the unhoused. Is the city setting the police up to fail? Is it setting up unhoused people to be sucked into our legal system?

Has anyone working for the city thought through the implications of this policy as implemented?

It’s good that the city is starting to remove some of the criminal elements of poverty, but it seems like the only goal is to hide houseless people from sight. City officials like to repeat that they have an empathy-based approach to homelessness. That is simply not true. Empathy means the ability to understand and share the feelings of others.

But as far as I can tell, this park plan doesn’t even consider houseless people to be human beings.

Editor's note: Since this story was first published, The Coast has changed the first name of the man who sometimes sleeps at the Geary Street site at his request in order to better protect his identity.