How Halifax composts 50,000 tonnes of material a year.

From banana peel to airport-garden soil: the nitty gritty on the municipality’s decomposition disposition. 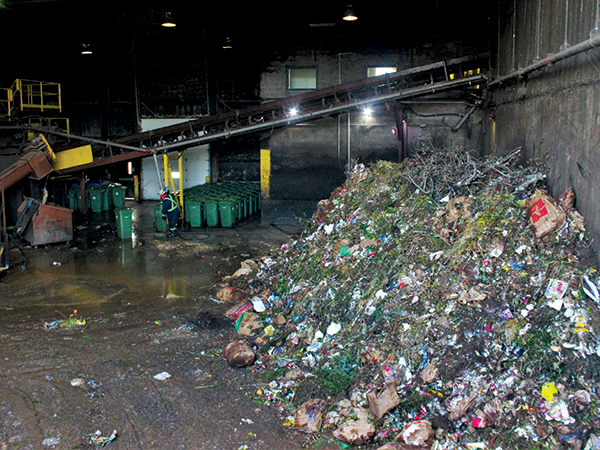 VICTORIA WALTON
A pile of compost dumped by trucks at the Miller waste facility.

H alifax has been composting since before it was cool, way back in 1998. These days, the municipality composts about 50,000 tonnes of compost every year—almost twice as much as it recycles.

The Miller Waste facility, on Gloria McCluskey Avenue in Burnside, receives about half of this material. The other half goes to the AIM Environmental facility in Ragged Lake outside Bedford.

The first thing you notice at the Burnside location is the smell. Compost on a large scale has a smell all its own. It's somewhere between dirty diapers, old shoes and rotting meat, permeating the air both inside and outside the warehouse.

Operations analyst Sean Hagan says for his first few years at the facility, the smell bothered him. But now, 12 years into it, he barely notices the odour anymore. Though he may not notice it, everyone employed at the facility still arrives home at the end of the day smelling like work.

Compost trucks arrive from their routes and dump their contents onto the tipping floor. The facility is built slightly below ground level so that compost materials don't blow away while being dumped.

The materials are pushed into a large pile on the floor, and then, similar to the MRF recycling facility, pushed up a conveyor belt. On the upper level, about four workers take the first stab at sorting through it all.

"They're pulling off things like plastic bags, diapers, anything that shouldn't be there in the organics process," says Chloe Kennedy, waste resource educator with HRM. "After they take all the material off then all the material goes through a magnet, and the magnet pulls off any chunks of metal contaminants or hazards."

The city is keen to educate people on what doesn't go in compost bins. Recently there's been an uptick in marketing "biodegradable" bags that don't live up to their name.

"There's a number of products on the market right now that are labelled as compostable but they're not necessarily compatible with our system," says Kennedy.

Educators frequently tell residents not to include things like pet waste in their compost.

"There's a number of mixed material contamination issues with cat litter, like the little blue balls that are used for scent," Kennedy adds. "And we service over 400,000 residents. When you have that much waste coming to the same facility there could be different pathogens or parasites."

Kennedy says between the workers and the magnet, about five tonnes—the equivalent of five small cars—of contaminants are taken out each day, and sent to the landfill.

Next, the remaining compostable material is shredded into two-inch pieces, and sent up another conveyor belt, where it drops into the second side of the facility—the vessel.

The vessel is large, deep and daunting, coming in at 75 feet wide, 270 feet long, and over eight feet deep. It's where compost sits for about a month to break down and begin the process of turning into soil.

"In this 30 days, the material loses a lot of weight and volume. As it breaks down it becomes lighter and way smaller," says Kennedy.

During those 30 days, there's an agitator at work, which moves the compost around. The eight-foot metal blade that pushes the material around makes HRM's process an aerobic one. (Versus vermicomposting, which relies on little wiggling worms to move around and break down the material, or static aerobic composting which takes a bit longer.)

"Once every two days the material is pushed about 10 feet, and that adds air into the process," explains Kennedy.

The city opts for aerobic over anaerobic processing in part because it releases less methane. Though temperature in the vessel still gets up to 50 degrees celsius for three days—the federal standard for pathogen kill says Kennedy. And the compost piles certainly have steam coming off them.

After 30 days in the main part of the vessel, the compost is moved to the rear portion, where it ages for another two months and finally becomes soil.

After being screened one last time for contaminants, the product is sent to Elmsdale Landscaping, which has a contract with HRM.

Elmsdale then ages the soil for another 12-24 months, and sells the product to their clients, both individuals and corporations.

"For the most part it's not going too far," says Kennedy. "The Halifax airport was landscaped using HRM's compost."

The job at the facility isn't done yet, though. Once the compost leaves, there's still residue it leaves behind.

Leachate—AKA the runoff water created when compost breaks down—is treated by Miller. The gas produced by the decomposition process is also sent through a natural bio-filter made of tree bark.

Kennedy says the main purpose of this is to reduce the smell coming from the facility so other nearby residents and businesses don't complain.

The public education team also does work around backyard composting, which HRM has been promoting since day one as well.

"It's really great for HRM when folks can compost their own organic waste at home, and then turn that waste into a valuable amenity for their garden," says Kennedy.

HRM offers plenty of education around compost, and those looking to learn more can sign up for the backyard composting basics program or the master composter recycler program.

By 2021 the 25-year contracts for both Miller and AIM Environmental will expire, according to a council agenda from last year. A tender request on the provincial website reveals that the city has not yet announced who will take over compost management for the next 35 years.