An update on #NSFilmJobs, the local arts story of the year. 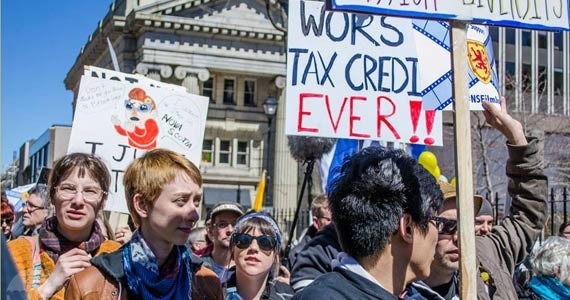 Last April's budget announcement kicked off a tumultuous time for Nova Scotia's film industry. The Liberal government slashed the film tax credit, the foundation of the film industry in many other provinces. After much backlash and a very successful PR campaign headed by Screen Nova Scotia, the previous uncapped tax credit, estimated to be worth $24 million, was replaced with a $10 million incentive fund with a separate credit available to digital animation productions.

That's not so bad, right? Maybe not in the long-term, but the NDP reported the number of film productions scheduled to shoot in Nova Scotia is down dramatically compared to this time last year. Many productions were cancelled or postponed due to the cut and uncertainty surrounding the new incentive fund. Meanwhile, hundreds of industry workers have left the province for greener pastures, many who were also contributors to a vibrant independent arts scene.

In November, local theatre company Doppler Effect staged its final production in Halifax and is setting sail to Europe. "As two full-time artists, a busy film season is crucial to making it viable for us to live and make art here through the rest of the year," says the company's co-artistic director Annie Valentina in a press release.

Since the spring, Screen Nova Scotia has been at the forefront of the #NSFilmjobs campaign, and has been essential in communicating the industry's budget concerns both to the government and the public. "Our small industry trade organization suddenly got caught up in this grander political struggle," says Marc Almon, chair of Screen Nova Scotia.

"What's scary to me," Almon says, "is that a lot of people have left because there has been such a dramatic loss of confidence. But that doesn't mean we can't get a lot of them back, and it doesn't mean that we can't start rebuilding some of the critical infrastructure for our industry—and do it ourselves."

Almon believes the new incentive fund could eventually be a good thing for industry infrastructure, since production costs are eligible for the new incentive fund, rather than only labour costs, as with the previous system. Under the new spending model, equipment and space rentals are offset, meaning Nova Scotia could see a film studio pop up, or places like SIM Digital and PS Production Services opening their doors rather than closing them. The separate digital animation credit is also essential for keeping companies like DHX Media from seeking other places to lay down roots, and has likely saved hundreds of jobs.

That this funding even exists is due, in no small part, to the efforts of Screen Nova Scotia and the public scrutiny surrounding the Liberal government's budget. A demonstration held April 15 is estimated to have had around 6,000 attendees, and an online petition had 35,000 signatures. People gathered in droves—online, in the streets, at Province House—to support an industry that is to many the foundation of Nova Scotia's creative culture. For a period of time, the government budget was the main water-cooler topic for a lot of people, and the scope of public attention was a decided benefit to the newly jeopardized industry.

"The tone of the rally was remarkable," says Almon. "It was a celebration of what we've accomplished as a community and, of course, it also reinforced what was at stake."

In the shadow of the tax credit cut, the unceremonious closing of Film and Creative Industries Nova Scotia received less attention, even though the effects of its absence are still looming large. The organization's responsibilities, from providing filming permits to funding emerging artist programs like AFCOOP's Film 5, were not all assigned to Nova Scotia Business Inc., which is administering the incentive fund.

"One of the things that really got lost in the shuffle was that this agency that had been responsible for administering critical programs for us, helping us remain competitive, broadcasting Nova Scotia as a filming location to the world—was just shut down," says Almon. Screen Nova Scotia has been slated to find ways of filling many of these gaps.

The Film 5 program, a starting point for many local filmmakers, was a near casualty of the office closure. "We did achieve a short-term fix," Almon says, "but there is no mechanism going forward for them to get funding in the future. The program remains still in doubt."

In November, the government agreed to $475,000 of funding over two years for Screen Nova Scotia to work towards replacing the support that has existed in the past, and proposing ways to encourage growth in the industry's new climate. Last week, Screen Nova Scotia posted a job opening for an executive director, the beginnings of a new team to start the wheels in motion. Among many things, Almon points out that the money will go towards strategic planning and promotional funding "to get the word out that Nova Scotia is still open for business and is a great place to create film and TV."

"We'll start hiring a very small staff and some contract people," says Almon. "We have to come up with a plan knowing that the government is not going to simply say they'll put things back the way they were before. It has to be something completely new. And that actually is kind of exciting. It means we have to go to the drawing board. It's going to be a lot of work, but considering the extraordinary grassroots efforts we saw earlier in the year, we know our community is capable of it."

For those who support the government's budget decisions, Screen Nova Scotia is commissioning a study from Pricewaterhouse-Coopers to determine exactly how the film industry contributes to the local economy. "It's being prepared by one of the best companies out there," says Almon, "and they're doing exhaustive research, even contacting places like lumberyards to get a sense of how important the film industry is to them, talking to suppliers. Meanwhile we are crafting a communication strategy around it because we want it to be a celebration. Again, it's not about attacking the government, it's about saying the industry is important and has tentacles throughout our society that you're not aware of."

Since the budget announcement in April, many people have speculated on the future of Nova Scotia's creative industries. Almon, especially, is hopeful. "From here going on forward we've really got to be positive," he says. "We know we have the winning conditions on our side."