3 new shows worth planning a day around feature works by Maud Lewis, Jack Bishop and more at AGNS, The Blue Building and the SMU Art Gallery.

In the throes of a July heatwave I wouldn’t necessarily call myself a Summer Person—but I guess I must be, since every November I find the sky itself oppressive as night falls at, according to Google, precisely 4:36pm. There are many ways to white-knuckle the long evenings until bedtime, but common coping—like TV binging or just saying ‘fuck it’ and going to bed at 8pm—don’t always cut it. Instead, my coping mechanism for seasonal blues is making an ad-hoc gallery crawl with as many friends as I can cajole into joining me. (The essential, though, is talking with a mental health professional. In Nova Scotia, numbers like 211 and 811 are non-emergency resources for finding services or simply someone to listen; In a crisis, the Provincial Mental Health Crisis Line can be reached toll-free at 1-888-429-8167.)


The great thing about a self-guided non-tour like this is that you get to choose your own adventure in terms of how much walking you wanna do, how much time you have, and how much art you feel feasting your eyes upon. The Khyber’s proximity to the Art Gallery of Nova Scotia often makes for a two-course express for me, but going further afield is always rewarding, too. I’ll often punctuate gallery viewings with coffee shop pit-stops along the route, making it the ultimate leisurely catch-up with your crew: You talk about the art, what you liked and what you didn’t, then you split a pastry and talk about your own life. It’s the sweet spot where structure and self-direction meet.


Convinced yet? If not, I’ll fill you in on something: It just so happens that now is the perfect time for you to go on a gallery crawl yourself, since the next few weeks are a coincidental high-water mark of excellence on view at local galleries, with three must-see shows dotting the city. 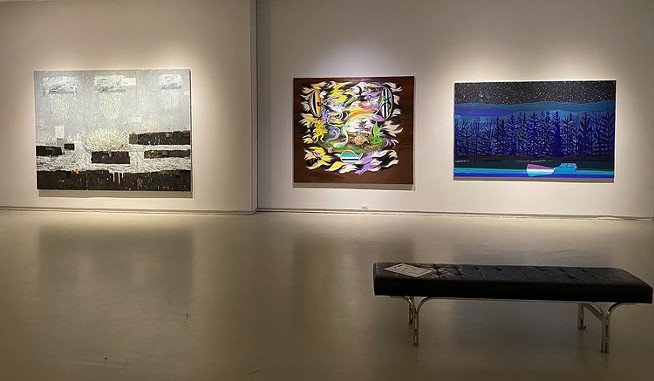 A partial look at the SMUAG show JIM, which features paintings by three lauded local artists.

First up is JIM, at the Saint Mary’s University Art Gallery (which is tucked inside the first floor of the Loyola Academic Complex on the SMU Campus, and is open Tuesday to Sunday, 11am-5pm and closed on Mondays). Extended from its original run until December 11, this exhibit feels like the visual art answer to a supergroup as it sees three noteworthy names combining forces and sharing wall space: The show features paintings by Jack Bishop (known for his landscapes of highways, byways and strip malls that are a modern answer to The Group of Seven's call), Ivan Murphy (whose canvases are a cacophony of textures so coveted, the Nova Scotia Art Bank has laid claim to a few) and Mitchell Wiebes (a multi-disciplinary artist who creates paintings beloved by critics that sometimes call the Fauvist movement to mind). While all are very different in subject matter and approach, viewing them together is a three-course feast in some of the most exciting canvases being created locally. 
Catch the bus from the SMU campus to downtown Halifax (1723 Hollis Street, to be exact) to peep the Art Gallery of Nova Scotia’s newest show, Maud Lewis. (The 10, 7B, 41 and 29 buses will all get you there in 15-20ish minutes. The AGNS is also closed Mondays, but is open 10am-5pm the rest of the week–and stays open until 9pm on Thursdays.)


Filled with works by the local folk art legend from all points in her career, this travelling exhibit has criss-crossed the country before coming to Lewis’s own province. Aside from being a rich trove of her work, though, it marks a turning point in how Lewis’s artwork is being perceived and discussed: The show, which opened Nov 26 and runs until next April, doesn’t focus on the life story of the artist but instead centres the value of the paintings themselves.

Get to know the real Maud Lewis at the Art Gallery of Nova Scotia’s new exhibit: It’s the biggest retrospective of the artist the province has seen in about a decade.

“When you walk into the gallery, you're gonna be immediately struck by colour and by style and her ability to draw graphic, decorative elements out of the surroundings, what she was looking at and what people were bringing her. That has started to become part of the way that curators are telling her story: Telling the story of the work,” Sarah Moore Fillmore, interim CEO of the AGNS, told The Coast about the show. “There’s more than meets the eye. It’s more than just her physical story. There's more to it than a cute story of resilience. There's an actual artist in there.”


From there, grab a coffee to go somewhere downtown (the AGNS itself has a cute cafe inside but, again, you do you) and walk towards Halifax’s north end for the tour’s final stop, The Blue Building (2482 Maynard Street, open Thursday to Saturday from noon to 6pm). There, prepare for the double dose of pulse-quickening paintings provided by two shows that open Friday, December 2: Jenny Yujia Shi’s Hopefully, I'll remember and Kayza DeGraff-Ford’s cross-rhythms of not yet and no longer. DeGraff-Ford and Yujia Shi are two of the city’s most exciting emerging artists. The former has won the grand prize at the NSCAD Student Art Awards and placed as a regional winner in the prestigious BMO 1st Art! Awards; The latter has shown at most of the city’s galleries, earning a spot in the provincial art bank along the way.

Repeat the art crawl—maybe swapping some shows out, maybe seeing more of what you loved the first time–as often as the crowded calendars of adulthood allows, extending the invite to anyone you wish you got to see more of. Shrug off the dark sky, knowing the gallery’s brightly lit enough, anyway. Soon, spring will return.