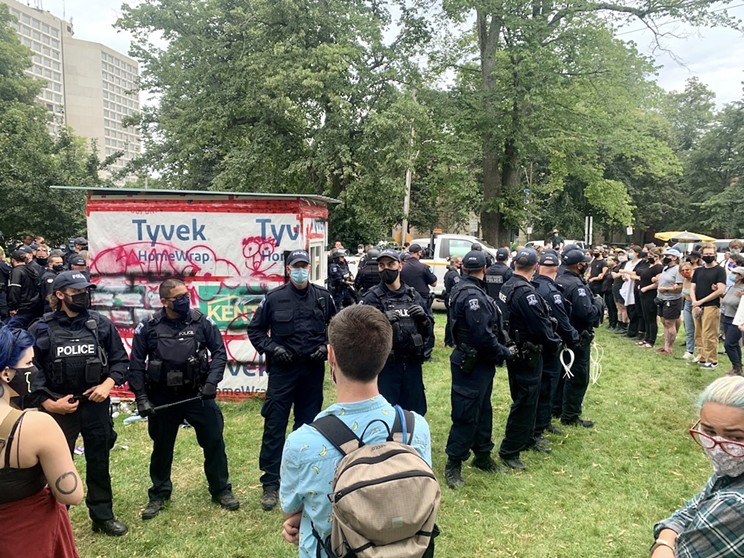 The Coast
Police ended up using pepper spray at the shelter siege evictions on August 18.

The rally, organized by P.A.D.S. and calling for a moratorium on crisis shelter evictions, starts at 11am.

There’s a rally in support of unhoused Haligonians this Saturday, September 18 at 11am. It's taking place outside Halifax City Hall in Grand Parade (1841 Argyle Street). Organized by the P.A.D.S. Community Network, supporters are being asked to show up to ask the government for a freeze on evictions due to the ongoing housing crisis.

RALLY THIS SATURDAY!
11am—City Hall
•To protest the city’s apathy-based approach to houselessness
•To demand that the unhoused be treated with dignity
•To call for a moratorium on evictions of those living in tents & crisis shelters#HousingForAll #HousingIsAHumanRight


"Everybody that has been placed into temporary housing by the city’s program is going to lose their space tomorrow," Rachelle Sauvé, site coordinator for P.A.D.S., told The Coast earlier this week at the People's Park at the corner of Chebucto and Dublin Streets.

The rally is expected to have speakers from P.A.D.S. as well as Halifax Mutual Aid, the organization that built the temporary wooden structures in some parks. The organizers say the rally is also to protest "the city’s apathy-based approach to houselessness" and "demand that the unhoused be treated with dignity."

While the protest is taking place at City Hall even though housing is *technically* still a provincial issue, it's not the first time the public has called upon regional council and mayor Mike Savage to address the issue. And in the past, Savage has responded to requests for something to be done.

“We have to make sure that everyone has a decent place to spend the night,” he said at a council meeting in August, just weeks after residents were violently evicted from the old library grounds. "I don’t want to be the mayor of a city where people don’t have the ability to spend the night in at least somewhat comfortable conditions and give themselves a chance to achieve their potential."