House of Lancaster strips down

City Field’s Sarah Gregg Millman strikes out on her own with fantasy-world synth pop. 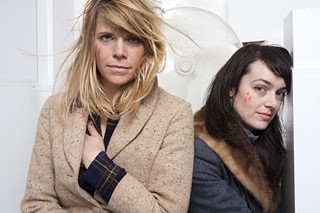 "It was a couple of weeks of 'I don't know if we can be named after a strip club,'" says the Halifax-born, Toronto-based Millman. "I guess it's a kind of Toronto-centric joke, but I'm not a stripper. I've never been there. Well, I used a phone there maybe once."

Yet, the name fits. As a visual artist, Millman's video work is a cinema-inspired lexicon of single working girls. And when it came to recruiting a drummer for House of Lancaster, it was important it be another woman.

Millman already spent years surrounded by Matt Murphy, Brent Randall, Mitchell Wiebe and Dave Ewenson in the band City Field. Working with these "super-pro people" built up Millman's confidence, but House of Lancaster is the first time she's performing her own material. She was more comfortable learning with another girl. For this tour she's enlisted Eleanor King on drums.

Contrary to the traditional guitar pop of City Field, House of Lancaster is more keyboard-driven. Millman switched to keys recording and performing in her poppy Guided by Voices cover band, The Girl Guides. House of Lancaster, though, is like the soundtrack to a slow-motion blizzard in dreary downtown Toronto. She doesn't consider it an extension of her art practice, but like her videos, her music creates "a fantasy world...where light and airy narratives mask the presence of oppression and anxiety lurking beneath the surface.

w/Rich Aucoin, The Grass, Brent Randall and his Pinecones