"And this one's called The Chanukah Song"

As brain dead and lethargic as a zombie, here comes the 3D CGI monstrosity Hotel Transylvania. Adam Sandler plays Adam Sandler doing a Dracula voice, who opens a remote hotel for mythical beasties in order to hide his beloved vampire daughter (Selena Gomez) away from the scary humans that killed her mother. A plan which chugs along fine until her 118 birthday, when amongst guests like Frankenstein (Kevin James), the Invisible Man (David Spade) and the Mummy (Cee-lo Green? Really?), a backpacking slacker tourist (Andy Samberg) finds his way inside. Pun-based humour and an maddeningly stupid plot rattle on with some serviceable animation until a resolution about true love arrives out of nowhere. An autotuned musical number that's not even the goddamn "Monster Mash" caps things off. This is a film where monsters eat bagels with “scream cheese.” That should tell you all you need.

Hotel Transylvania is not showing in any theaters in the area. 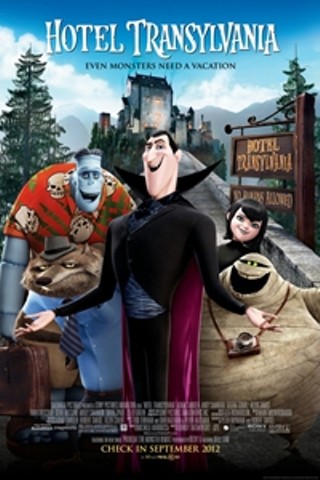