Honouring the African Nova Scotian community with a concrete legacy 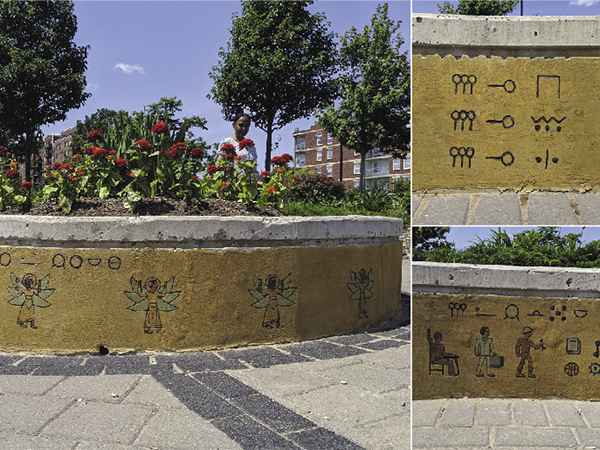 THE COAST
Nelligan’s work can be found at the Halifax Common plaza at North Park and Cunard Streets.

From community consultations to carving in concrete, a new art installation in the Halifax Common to honour the African Nova Scotian community is finally finished.

In 2015, Halifax set out to build three art installations around the Halifax Common park, and this week the finishing touches were painted on at the Agricola, Cunard and North Park Streets' roundabout plaza. The hieroglyphic-styled art that circles the seating area and crosses the walking path depicts "the journey of the experience of Black people," says artist and web designer Marven Nelligan, "not just in the north end, but throughout Nova Scotia and North America."

The project's own name, Concrete Legacy, was one of the main inspirations for the piece, says Nelligan.

It's a play on words, "In the sense that, this concrete legacy, and the fact that this design is etched in stone is sort of ironic." Ironic because "the legacy and the history of Black people, which, in a lot of ways, gets belittled and overlooked.

"It really speaks to the struggles and the triumphs of the community, and the people as well," says Nelligan.

LaMeia Reddick says that ensuring the art represents what the community wanted to see was the main part of community consultations. She was on the council advisory board for the project.

"There was all this stuff that about family and love and roots and last names," she says, "and this really beautiful stuff coming out about who the African Nova Scotian community was."

Working with the project over the years to see it to completion, "to see what the community said and to see if reflected in stone now," says Reddick, "it's amazing."

At the unveiling on Thursday, July 18, there will be a legend of sorts to explain some of the images, but Nelligan says it's intentionally not obvious. He wants to keep the literal translation and meaning to himself, so that people taking in the piece are forced to "try to figure out what it's saying and look at the words and try to decipher it, and try to come up with something like in their own mind what they think it means."

In putting the work in stone, he's also hoping people recognize that this art, depicting an important history takes up this space.

The importance of accurate representation and being able to make an art piece that people could engage with in a real way was important to Nelligan. Being intentional and accurate in these types of instillations to represent and honour a community matters.

"Being Black in Halifax is like hearing our music, but not seeing our faces represented," she says. "It's all good to put the art up or to play the music...that is our art. But if you don't have spaces that are safe and reflective of us, then it's like, what's the point? It's that you get to enjoy our culture without us being there. In the end of it, we can be proud that it's done. And it's going to be there for a long time now."

The project took so long because of discussions over proposed repairs to the concrete, says HRM and the total cost of the three plaza installations—the third, honouring the 2SLGBTQ+ community, is expected to be completed this fall—and the Our Common Woods project which made seating and art installations with trees cut down in the roundabout construction will be $105,000.

We love that Halifax came together in grief